One to Grow On

So I'm just hanging out at school, doing a little rotary cutting of pieces that only need cutting on Saturday, running a little behind my 'I need to leave at noon' timetable because I wanted to *finish* the job, when Costume Sewing Head Honcho Miss R came around.

"I know you just finished all those shirts, but do you think you could do one more thing?"

Turns out the lady who was sewing the costumes for one of the secondary characters, Pippin's half-brother Louis, had had a series of family crises and simply couldn't get in to pick up the fabric for the last thing she was making. Mr H, the Bone Fide Genius costume designer, was in the building, if I could talk to him about what he wanted for this garment (she said 'cape' and I had visions of a long, wide thing that would require crawling around on the floor to cut out), perhaps, well, I could say 'No' if I needed to, but, maybe...could I talk to him?

Feeling apprehensive, I agreed and went to see what was needed.

Turns out it wasn't a cape but a sleeveless cloak...a Bible Costume vest (Simplicity 4795, top row, lengthened to the floor) with trim around all the edges. Ok, I think I can do that.

The fabric was a foil-printed knit, and the trim was to be the same metallic-lattice printed stretch velvet we'd used on the Troupe guys' pants. I brought it home, traced the pattern yesterday and then began to try and figure out the best way to add the trimming. He actually wants all the edges bound 'the width of the selvedge'...well, the selvedge is 2 1/2 wide. 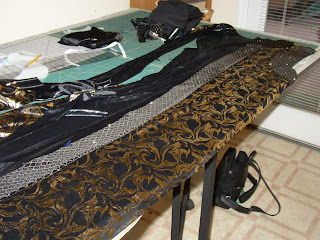 I cut the vest pieces out and sewed them at the shoulder seams; I'm thinking I'll need something like double facings for the neckline and armholes; I ran out of fabric and had to get more when I picked The Actor (AKA DS the Younger) up from rehearsal. I laid the trim out just to get an idea; I'm thinking it's almost too wide on the neck and arms; I may reduce it a bit.

Oh, and I really need to have it done by the end of rehearsal today. I think tomorrow night is Dress Rehearsal; the show opens w/a middle school performance Friday morning; first public performance is Friday night.

So maybe I can have my sewing room back tomorrow. Maybe.
Posted by Lisa Laree at 8:02 AM