It's been a minute, lol.

I'm supposed to have done a summary of last year's sewing and purchases and whatnot and, nope, hasn't happened.

Because I think I only made, like, two tops last year.  And a bazillion (well, maybe 90? ish?) masks.

Anything put in for a bendy bit either eventually a) breaks or b) pokes through the binding or c) both.

Most people that I made masks for have left those in the drawers and opted to wear the disposable ones. The ties are not very popular.

But it is interesting that the CDC mask recommendations that are coming out in light of more contagious strands of the 'rona are to wear a mask that is 2 - 3 layers thick (yup, mine are 3 layers) and ties rather than loops over the ears.  So, there's that, lol. I have made a version of the facemask that has elastic ear loops and is somewhat box shaped, so as not to need the bendy bit, but I'm finding that, for whatever reason, it's difficult to be consistent in the sizing.  You'd think if they are all constructed the same they should end up the same but so far that has not been the case.  But I haven't made nearly as many of those so perhaps I just need more practice. They are a bit trickier.

But I have placed the first fabric order of 2021...for some pink knit tops.  I finally came round to acknowledging that blue-based pinks are colors that I wear well so I am looking to make a little capsule wardrobe with some pink mixed with gray.  Nice and soft.  After I replace my favorite gray cardigan that I apparently left hanging in the closet of the Bed and Breakfast we stayed at for our 40th anniversary last August. 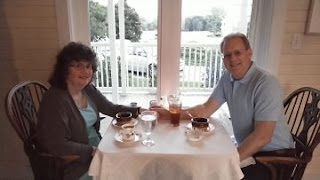 The last time I wore the cardi...
Not to worry; I have some suitable knit in the stash; I just need to clean off my cutting table and get on it.
I am really feeling the creative itch to sew a bit so hopefully I can unearth myself from the mask making materials that I kind of went overboard collecting and digging out of nicely packed away goods.  And I do have a small Christmas project to blog about so maybe I won't be such a stranger in the coming weeks.
Meantime, if any of you have not stumbled onto this youtube channel before, I'm going to share my latest binge-watch...there may be historical garments in my future, lol.
Bernadette Banner
I have leaned something from the historical costuming rabbit hole I went down...scraps/ remnant yardage is termed 'cabbage'.  I'd never heard that term for it and I think it's hysterical.
I have way too much cabbage about, lol.
Posted by Lisa Laree at 3:48 PM 6 comments: