I knew the WW posts would be irregular, but I did mean to post them a LITTLE more often than this...

Anyway, today I woke up feeling green.  Not ready for full out fall colors, even though fall is Officially Here, it's 80ish degrees outside and I just don't feel ready to dig out the boots and stuff.

Not sure how my feet are going to like going back into closed shoes again, either.  5 months of Birkenstocks have reduced the neuroma symptoms considerably, but they are not gone. Sigh.

The first green silk blouse I pulled out of the closet surprised me because it hadn't been pressed.  I normally don't bring things upstairs until they've had a date with the iron, so I was rather dismayed to see that it wasn't wearable...and I didn't have time to iron.

So I pulled out my green grade Z duppioni Tribeca Shirt and went scrounging in the closet to see if I had a scarf that would go with it.  I found a greenish floral scarf that I got for really cheap someplace this spring and laid it on the shirt.  My first thought was, wow, that really looks blue against that green...but as I looked at it a moment I realized there were shades of green mottled up in it that DID match the green of the shirt.

So I put on some jeans and my blue rayon lycra jersey Jalie 965 tank top , then I topped it with the Tribeca and the Really Cheap scarf.  And some jadey green/gold earrings that have been lurking in the jewelry box so long I can't say when I actually wore them last.

And I got enough compliments today (i.e., TWO...lol) that I thought it might be worth a Work Wear Post.

The Flute Player played the part of the photographer today and didn't do TOO badly, although the light settings were set for the wrong kind of light.

Maybe I can get in the sewing room just a bit tonight to put those pockets (inseam after all) on the Loud Jacket...

Posted by Lisa Laree at 8:37 PM No comments: 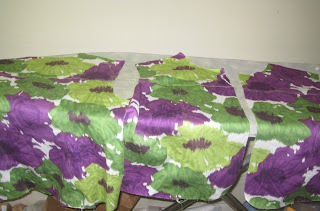 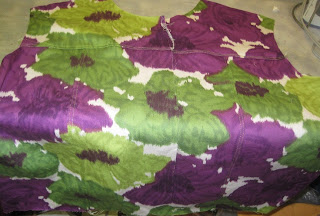 Well, I didn't get to sew *all* evening, but I got a little bit done.  The back and the front are assembled and topstitched...and I don't think I did a half bad job of pattern matching.  Not perfect, but good enough.

The next 'work unit' will be the sleeves, collar, cuffs and facings.  I'm trying to decide if I want to go out of the box and put pockets in this jacket; the pattern has none, so I'd be adding a new element.  And if I *do* add pockets, should they be welt pockets or side seam pockets??

Decisions, decisions...
Posted by Lisa Laree at 10:51 PM No comments:

Picking up the Flute Player from a mask-building session at school tonight, the director asked if I could make a dress for the show...kind of a poly organzaish over poly silky looking thing, just from what I could see in the bag.

I told her unless it was something I could do tomorrow evening, I was going to have to say no.  Because the only other time I have available for sewing is at 2 AM.

So she said she would ask someone else.

What I *didn't* say was, 'You know, if you had asked me in August I could possibly have worked it in.'

I do not like telling people 'No'.  I really don't.  But...sometimes, that's the only reasonable and logical thing to do.

Meantime, progress made today on the Loud Jacket: Zero.

But I *do* have tomorrow night available.  We'll see if I can get to the sewing machines...
Posted by Lisa Laree at 10:36 PM 1 comment:

What Followed Me Home...

So, yeah, yesterday I had to make a trip to Hancock's because I needed some lime green thread and some buttons...either purple or green...for the Loud jacket.

Ahem.  Turns out Butterick and Vogue patterns were on sale.

Now, I *could* have bought  10 of each, per the sale signs, so I think the fact that I only really added 7 more patterns to the stash is exhibiting great restraint...Ahem again... 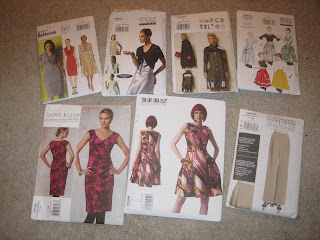 So far, on the jacket I have...fused down the interfacing and changed the thread in the machines.  Dunno if I will get to do anything else on it this week or not; Tuesday night is the only free night and the annual She Rev Women's Conference is going to have my weekend occupied.  Not complaining about that...just stating the fact....

This jacket is probably going to get put together in 10 - 20 minute increments...
Posted by Lisa Laree at 9:41 PM 2 comments:

Questions, answers and the beginnings of a LOUD Jacket...

Debbie Cook posted some questions/answers on her blog apparently pertaining to a discussion over on Pattern Review.  I haven't been spending much time on the boards, so this one has gotten by me, but I thought I'd answer Debbie's questions, too...if for no other reason than I would please myself by putting up posts two days in a row... ;-)

Depends.  If it's more stable one way or the other, I'll cut it that way.  Sometimes you don't have a choice...witness the project that I spent most of the day yesterday cutting out: 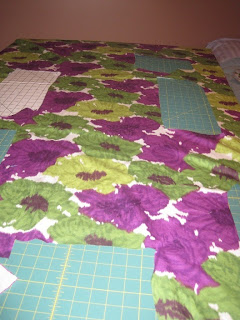 It will be a McCall's 5191 jacket; that print is so big that I thought I should pay attention to placement and ended up doing my best to match it at the most obvious seams.  I know I made a boo boo at least one spot...hoping it's not horrible.  A near match is worse than a total mismatch...  anyway, that fabric had to be cut right side up.  One piece at a time.

2. How do you make your pattern markings?

I have two basic methods...tailors tacks for interior marks and snips for notches/dots on the seam line.  On rare occasions I will pull out the tracing paper and spikey wheel when those two things are  not sufficient.

Why?  There's enough info on the pattern pieces to lay them out...and, normally I'm using stashed fabric which will be either more or less than stated on the envelope anyway.  You do what ya gotta do.  That McCall's layout certainly looked nothing like that photo...

4. Are you obsessed with re-folding your pattern tissue on or very close to the original fold lines?
Oh, yeah.  But I trace all my patterns and then put the sheets back in the envelopes uncut.  Well, actually, most of them don't go back in the envelope; they go in the zipper portion of those special pattern-keeper bags that I can't find at Nancy's Notions at the moment.  The envelope, instructions and traced pieces go in the front pocket of the bag.

Nope.  Just the ones I reasonably expect I'll need.  Button/button holes are NEVER marked; I mark that placement after the garment is constructed based on my own anatomical requirements...i.e., there must be a button/buttonhole at the full bust level.  Which I guarantee you will not be where one is marked on the pattern.

Also...if you don't mark button/button hole on a sleeve cuff, you don't have to worry about that little notch that tells you which end of the cuff goes where.   Just put the cuff on and then mark your buttonholes on the correct side and sew the buttons correspondingly.


And, yes, that jacket is going to be purple and lime green, which are the choir colors for this month.  I ordered it early in the summer, before I knew I would be sitting out of choir a bit.  I *may* be back by the end of the month (since there are 5 Sundays in September this year) and it was on the top of the pile...; -)

I also cut out another Simplicity 2599 shell top, this one from lime green rayon challis that actually belonged to the Princess.  She left it behind when she moved out, and when I asked her if she had plans for it (seeing as how it IS the green for choir this month) she told me to have at it.  This will be the 3rd iteration of that top...the review picture looks pretty awful, and I've already sent that version on to Goodwill.  But if this one actually fits well, I'll update the review.

Which happens to be my most recent review and is almost exactly a year old. The little sewing I've been doing for the past year has all been TNT's.  Just haven't tried anything new.  For a year.  Sad.
Posted by Lisa Laree at 4:18 PM 1 comment:

Labels: Clothes for My Closet, On the Web, Projects: Jackets

...is when there is sewing happening at church, crunch sewing, and I'm not part of it.

There is a team of ladies who are working on sewing some panels for the decor for the upcoming women's conference; there is a lot to do, I've heard, and the volunteer squad has been rather small.

And I am so obviously consumed with the data base that I haven't been asked to help.  I'm sorry to miss the camaraderie of  working on the project together, but, well, as I've told a couple of folks, I haven't even had time to buy milk lately.

But I hit a small milestone of progress yesterday...barely, and there will still need to be follow up work on it next week, but I hit it... so today, I am staying home, doing laundry and maybe, just maybe, doing a bit of sewing as I wait on the machines to do their thang.

I have promised myself I will NOT log into the data base until I start data entry on Sunday.  We'll see if I can hold myself to that promise.

But...my biggest problem in the sewing room right now is that I have so many things I want to sew...I don't have a clue where to start.

Maybe I'll just pull whatever is on top of the 'do this' pile and do it...
Posted by Lisa Laree at 9:20 AM No comments: