The Flute Player is getting married in June.  At the local Botanical Garden...ie, outside.  In the early afternoon.

In other words, it's gonna likely be HOT.

So...for the MOB dress, I want something cool and airy and floaty.  Definitely NOT POLYESTER.

The bridesmaids are in a pretty shade of light blue; the guys are wearing white shirts, khaki pants, and kind of a golden yellow suspenders and bow ties.  There are flowers in white, blue, yellow, and pink.

I wanted a kind of a floral print, in something rayon and floaty...poked around on an internet somewhat.  Found something I really like, but it was backordered.  But it was so perfect I crossed my fingers and ordered it anyway.  Last week.

The colors are dead perfect,although my monitor shows the colors slightly greyed.  It is rayon crepe; light and floaty.  I have 4 1/2 yards.  Should be enough for whatever I pick.

Time to dig through the patterns now.

Caught a discount for Stylearc patterns on Amazon and found a few that intrigued me.  My pattern purchasing has dropped somewhat, but each of these had something about it that was unique enough that I decided to splurge... 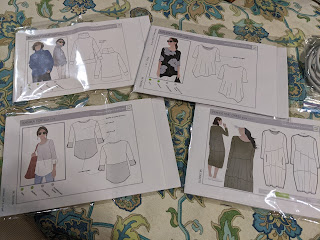 I don't actually know when I will get to sit down at the sewing machine and actually MAKE A GARMENT.  The truth is, my sewing stashes have amoebaed themselves right out of their original space and taken up way more house space than I can afford for them to occupy.  Most of it is from chronic disorganization, pure and simple, so I am telling myself I am going to clean and organize and maybe even MOVE the whole lot of it during the months of April and May.  I've got two weekends this month that My Sweet Babboo will be off camping with the boys' mnistry; so I aim to get a good start on the process while he's gone.  I will be finishing the classes I'm taking in our ministry program at church this month also (I have a zoom meeting for that in 25 minutes so I'm typing fast, lol)...once that is done, I'll have a bit more time available so I can work on it and not fret about finishing homework.

And, you know, there is a wedding coming up.  It looks like I will be doing something with the bridesmaid's dresses...at least hemming them, and discussions are already underway to solve a problem with the décolletage being a little more revealing than was anticipated....the theater costumer may surface again, lol. But this will have to look good at a close range, unlike costumes for a stage production.  And, of course, I'll be making my dress.  But I'mma gonna do that in June.

So there is sewing on the docket.  But first...clean and organize.  My sewing room hasn't looked like the tiled photos since...well, pretty much since those pics were taken.  Pippin costuming hit right after that and the space hasn't been clean since.  I will take photos...but I'm not sure I'll be brave enough to share them, lol.  It really is bad.

So...wish me luck and tenacity so I don't just pull stuff out and then get bored/ frustrated/ antsy and not really finish.  I'm really, really tired of trying to sew in a mess.