I missed a milestone...

I just happened to notice that, according to Blogger's count, this is post number 2030 on Sew Random.

I totally missed that 2000 milestone...(counts back).. it looks like it was the first post-vacation trip post back in September.   Wow, I really hadn't been paying attention to that counter.

But I did finish another item for the closet...back in, oh, February of last year, I cut out a red shell top, thinking I might use it for either SWAP or the 12 months/12 outfits wardrobe.  But it didn't end up being needed and, to tell the truth, I forgot about it.  Found it Friday and sewed it up. Only a hanger shot at the moment...and it looks like a sack on the hanger.  But it's viscose challis and it's as light as air. 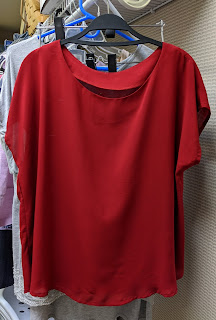 I had about 2 yards;  I folded one selvedge in just wide enough to cut the front and back on the same fold so the uncut remnant ran the length of the yardage.  I squared it up, fringed the ends and narrow hemmed the long edges and now I have a lightweight red scarf.  I liked the fabric so much I bought another fairly good sized chunk for a floaty dress...someday...

But I think I need to make another batch of masks before I work on another closet item.The mandates mean everyone needs one...
Posted by Lisa Laree at 2:59 PM No comments:

Labels: blogging, Clothes for My Closet 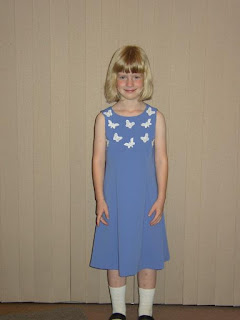 So...remember this cutie, who was so happy in her sweet little butterfly dress that I made back in 2003?  That was a year before  I started blogging, but I did put a review up on Pattern Review for that little dress. 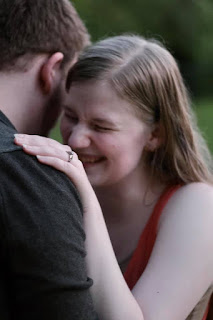 I think I have another dozen or so of those butterfly appliques around somewhere...maybe I'll sew them on her wedding dress...

And it ain't nothing to brag about, but it will be something I can throw on.
It's the Hot Patterns Fast and Fabulous LaStrada T...made from ONE YARD of ITY jersey: 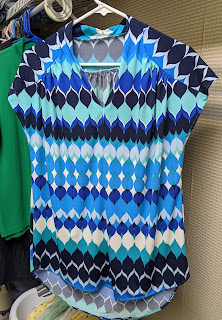 I really didn't have enough fabric for the shirt, because I didn't have enough to match it up.  I didn't think it would show that much...ha ha and ha.  From the slight angle of the shirt on the hanger, the mismatch at the front is kinda not so obvious, which is encouraging; maybe if I keep moving no one will pick up on it, lol.
This is the second LaStrada I've made with a patterned fabric; the first time I didn't think at all about balancing the print and I was very sorry, because I *could* have made it look much nicer.  This one...I thought as long as I had the stripes even it would be ok.  Meh.  The teardrop shapes are not quite symmetric at the center front seam. It will bug me.
Plus, this was the shirt that killed my serger.  It was almost dead anyway, but the pin that buried itself in the gathers finished it off.  I did take the new backup serger and  re-finish off the gathered back seam, which was AWFUL.  It helped a bit, but the distortion that happened from the dragging knife couldn't be completely atoned for.  Fortunately, 1) it really isn't horrible now, if you don't know and 2) it's in the back anyway and will likely be under a cardigan or other topper.  I will wear it and be glad for it, but it could have been better...had I had a smidge more fabric and cooperative equipment, lol.  And I thought it would be a quick project.
But, you guys...this is just the SECOND garment I have made for myself this entire YEAR.
That's seriously depressing.
There are, um, reasons, I suppose.  The subpar serger being one of them; the complete and total disarray of all things sewing related in the house is another.  I'm not going into detail; but it's really detracting from my enjoyment of the craft.  And then there are all those masks...and I should make another batch; I've given away almost all of them that I made earlier.  I gained weight (didn't everyone?) while we were basically locked down in March and April; none of my patterns fit. (Back to walking and tracking calories on the Fitbit; the quarantine weight is almost gone.  This is going to be a long haul to get rid of the weight that had crept on before that; I hope I have the stamina to stick to it).
But probably the biggest issue is...I'm home almost all the time.  We had some folks at work develop the virus (my precautionary test came back negative) so after being back in the office for about six weeks we are now working from home again for at least the next week. While we did have services for the month of June, My Sweet Babboo and I still watched from home, since he has some immune system issues.  In any case...there's no choir, and that's likely not to change so long as we are in virus-avoidance mode.
So I really don't have much demand for new clothes.  I have decided I'm going to work on straightening and sorting and...dare I say it...paring down some of the superfluous stash.  Maybe I'll make some...interesting...things that I haven't had time to make for a while. While I sew batches of masks.
If I'm really brave I will clean through the closet and do some weeding.  I might as well get rid of stuff I don't LOVE...things that were in the closet because that was a color we wore for choir and I never wear it any where else.
Maybe I'll play around with some more of the capsule wardrobe planning tools, just for fun.  I really don't know from here.
Maybe once my space is cleared and the recent fabric and pattern acquisitions are properly stored and I can breath again...inspiration will hit.
I can hope.
The trick is to stay off the fabric vendor sites.  I do want to support the businesses, but I honestly believe I could sew from my stash for like, from now on.
Maybe I'll do a little sewing for my family.  Daughter number one...the Princess...is expecting grandson number one in November, and daughter number two has some gaps in her closet that I could perhaps fill.  I think they're both past the 'oh, no, not MOMS SEWING' stage, lol.
Posted by Lisa Laree at 10:37 PM 4 comments: