You got that right... 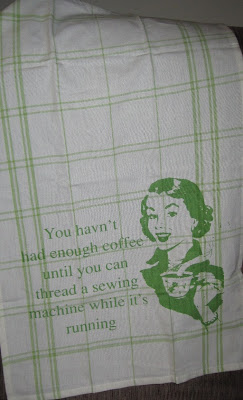 ...From my Christmas morning stocking...not that I'd ever actually TEST the theory, mind you!

Got nowhere near the sewing machine this week; just didn't happen. So I'll have one muslin carry over that I hope to sew up as soon as I can...before I do any more cutting.

At the moment, the cutting table is buried under gift wrapping supplies anyway. We're doing our nuclear family Christmas tomorrow, and our holiday snacks of choice will be decongestants, expectorants and cough syrup night caps.

So, Happy New Year! And, for those who are, like us, somewhat non-traditional in observance...Merry (7th day of) Christmas!
Posted by Lisa Laree at 10:26 AM 6 comments:

I'm determined not to carry over anything from 2010 if I can possibly help it...so, whilst the laundry was running today, I put together the knit (Loes Hinse) Oxford pants I cut out back on October 2....and I'm holding off on cutting out the last two pieces of the white long-sleeved camp shirt until after Jan 1!

As many times as I've made Oxfords, I've never tried them in a knit before. But, you know, there are times when you need pants that can function as sweat pants, but need to look presentable (I'm particularly thinking about days when I have to leave work, go to the chiropractor, then return to work). I ordered some poly/rayon/lycra double knit at a super duper sale price back in March for just such a purpose...glad I got 'em in the closet before the year was up. ;)

I think these will fill their intended function very well. The knit is very, very nice; I've got 2 more yards but I might make a dress...or some pants for The Flute Player (she needs some black knit pants for drama).

Now, I'm going to get through Christmas, then see if I can get that jacket muslin put together before midnight on the 31st....then I'd have a clear queue for January 1 AND a tested jacket pattern; I'd REALLY like to jump on the 'jacket a month in 2011' bandwagon.

So, Merry Christmas to all my sewing buddies! I hope your holiday is spent with people and events you love!
Posted by Lisa Laree at 8:28 PM 5 comments:

Labels: Clothes for My Closet

I thought, in honor of celebrating 25 years of motherhood, I'd do a little retrospective of the various garments I've sewn for my firstborn down through the ages.

I got the highlights of the first five years. Several of those garments I'd totally forgotten about. Wow. 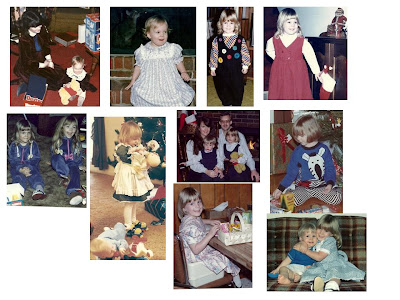 And that's really only about half of it...just the better things.

I didn't realize I accomplished so much!

But I had a hard time finding photos that showed the clothes; I guess I was more interested in taking pictures of the kids! Imagine! LOL....
Posted by Lisa Laree at 11:21 PM 6 comments:

He proposed and she said yes; we will have a son-in-law sometime around the middle of September if all goes well with the scheduling.

There will be sewing...even if it's only a MOB/SisterOB kinda thing.

Labels: The Wedding of the Princess 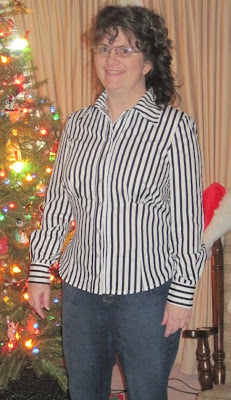 I finally finished McCalls 5522, sewing on all 11 buttons while sitting in the endoscopy waiting area at the local hospital whilst My Sweet Baboo endured the Routine Over 50 Health Procedure Everyone Hates.

I have to say, the shirt looks better than I expected. At various times in the process of constructing it I was sure it was gonna be a wadder. I don't think it's a wadder, but I'll have to be careful when I wear it, as it's definitely Not There Yet, fit-wise.

The first issue I had was when I sewed the horizontal seams; I was sure those stripes w/their near-matching would just be too jarring and was really wishing I'd cut the lower pieces on the bias to minimize that. Then, when I added the front band, I found that the stripes were not quite matching up vertically there, either...and I was afraid that'd be jarring. Oh, if I had only added the ruffles, they would totally have masked the variations in stripe widths at the band seams. Then I realized the collar is cut on the wrong grainline; those stripes should be horizontal, not vertical. That's the way it's marked; it just didn't register that, for a striped shirt, I'd really want them going the other way.

But, once it was all together, it didn't seem as bad as I thought. Except for one slight problem. 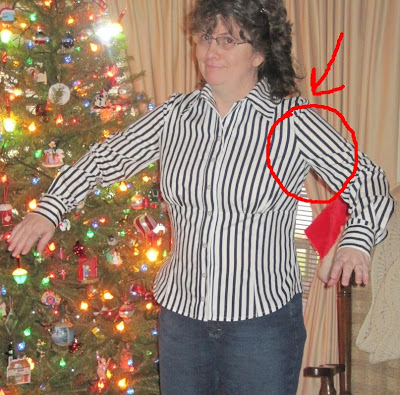 The dreaded Binding Sleeve. That is All. I. Can. Raise. My. Arms.

I've hit this problem over and over again on regular fitted shirt sleeves. It feels like there's not enough fabric in the sleeve, and too much fabric in the shirt, right at the underarm. When I raise my arm, as you can see in the circled spot, the shirt pulls and the sleeve twists over the upper arm.

But I went through several of the reviews for this pattern, and I didn't find anyone else who made the long-sleeved version who mentioned this problem.

I've read several opinions of what causes this but I haven't really seen a solution...a pattern fix...for it. I don't want the sleeve to be looser; it really isn't tight until I move my arms.

Aside from that, I found that I hadn't added enough ease in the back just above my waist (that old lady back fat thing is starting to happen...sigh), and I don't think the stand is high enough for the collar. It's not intended to button all the way up, and it's a good thing, because if it were buttoned at the band the collar bends and crinkles unattractively. Open, it's fine.

I'll get the review done and explain the alterations I did in more detail later on tonight (I hope).

Meantime, it sure feels good to put something in the 'done' column!
Posted by Lisa Laree at 4:31 PM 10 comments: