Friday morning, I got a text message, wanting to know if My Sweet Babboo and I would be willing to join another couple in donning Dickens costumes and singing Christmas Carols before each service today. 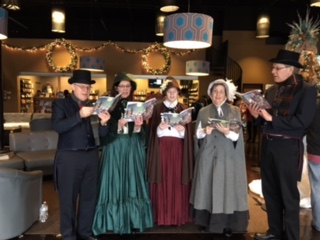 You can't see it, but we have a horse and sleigh just to our left; it was a kinda serendipitous acquisition and was used for photo ops all morning.

We barely had time to pull the costumes...they have been moved since we last used them...and practice a half dozen or so carols in a key such that we could all sing melody.  Just not enough time for us contemporary worship folks to learn traditional four part harmony.

Of course, that meant we had to miss participating in the choir; we sang for latecomers through the first song of the worship set.

The Flute Player joined us; she's in the middle, in a skirt I made for her when she was in the 8th grade for a school production of A Christmas Carol.  We were both surprised that it wasn't too short for her; she must've worn some heels on her boots in 8th grade!  My gray cape is 30 years old...I bought it when I was in my last trimester with our firstborn.  It's been worn several times now as a pseudo-dickens cloak.

The funny thing is that I actually bought fabric to make Dickens costumes for myself and My Sweet Babboo, back in, like, June, thinking we were going to do a production this year.  HOWever, we were presented instead with the opportunity to purchase a retired high school to renovate into a facility that will alleviate our uber-crowdedness so any possibility of doing a major production this year totally evaporated and I didn't bother to make the costumes.

Friday afternoon, I was *really* wishing I'd just gone ahead and sewn them up.  But we managed to find enough costumes in church storage to outfit our crew.

The high school has a 750-seat professional-grade theater, with 12 drops in the flies, which was new in, like, 2002.  It's not even going to need much more than a spruce up with paint and it's ready for action.  I'm thinking I need to get on those costumes soon after the new year...because this is definitely the shadow of Christmas Yet To Come... 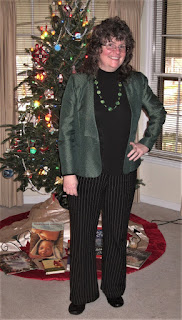 Choir wardrobe colors for December are black and kind of a foresty-green.

It was a kinda last minute change; when word came I went to my closet and found exactly two items that would do;  the black-and-green scarf that I wore last week and this Neue Mode jacket made from upholstery fabric something like 9 years ago.  The scarf was dead on the right color; the jacket leans a little to gold but has some variance in it that makes it blend, so it works.

It's teamed up with a rayon/lycra turtleneck that I can't even remember the pattern from which it was made; I'm not sure it wasn't a frankenpattern of some sort.  It's old and,  I keep forgetting, has enough lycra in it that it's shiny when stretched and photographed w/ a flash.  I confess to doing a little judicious photo editing to eliminate some of the shine. ;-).

The pants are my often-worn RPL modified Loes Hinse Oxfords.

On another note, we have a fresh tree this year. Or semi-fresh; we got it from a pre-cut lot as the only ones we can find in the local tree farms are scotch pines, which really don't have much scent.  The fragrance is the only reason to put up with the mess of an actual wooden tree; so we got a fir of some sort.  My Sweet Babboo and the Flute Player picked it out; I was dealing with the recurring vertigo and sent them off to do it.  They got a nice one, but they did not find out exactly what type of  tree it is.  It smells lovely, though; I can smell it from the top of the stairs.

I pulled out the antique GE Lighted Ice bulbs and the bubble lights.  And the ornament spinners.  So it is a somewhat retro kinetic tree. 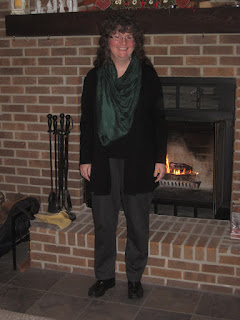 We had a last minute change in wardrobe colors for December;  we went from black and red to black and a sort of foresty-green.  No time to hit the sewing machine (and I don't think I even have any green that color in the stash) and shopping is just not gonna happen, so I'm limited to what's already in the wardrobe.

So I'm basically wearing black...black 'denim' Helix pants, a black Jalie 2566 t and a black ponte McCall's 6844 (the pants and Jacket are from this years SWAP wardrobe)...with a black-and-green poly/acrylic scarf that I *think* I got at Hancock's about 5 years ago.

I'll be honest...I have no idea what's up with the photography and the Helix pants.  I put them on, look in my mirror and think, 'Oh, those look great!'...then I look at the photos and think 'Gah! What is going on with all that baggy stuff????'

Maybe it's just  my posture for photos...who knows...

I'm late with the post; a bit of sheepish explanation.  I've got a bunch of fluid in my ears and it appears to be causing some pretty extreme ver ti go (don't want to trip a search...).  I'll be going fine when I get up in the morning and then a couple of hours later...bam! I'm knocked flat for a bit.  I've had trouble working whole days...it's been kind of a pain in the patootie.  I've been on an antibiotic, which seemed to make me feel even worse,  done the little position maneuvers that are supposed to help, with no real benefit...my GP is going to refer me to an ENT.  Hopefully that will happen sooner rather than later.

I had a rough four or so hours this afternoon, but it seems to have subsided a bit for now.  So I've kinda got a 'let's see how much I can get done while my head is on right' challenge at the moment.