The Sewing has started for SWAP...

At least, it's started on the Stitcher's Guild site.  I'm not going to even decide what I'm doing first until I see what Janice's picks are for the January wardrobe sets.  Pants and cardi in the main neutral with an accent top?  Accent pants w/ neutral top and cardi (twinset)?  Or will she do something other than pants?  I kinda doubt that...she has long maintained that a good basic pair of pants is the best first garment in wardrobe building.  But she has used a different neutral/accent combination every year so far...and with three pieces in the January set, she's pretty well exhausted the combos already.  So I'm not sure what we'll see when the posts go up.

But I've been digging around on the SG site and found that there have been some more definition/explanation added to the rules, one of which has me wondering if I can actually meet the requirements AND stick to my 12-months 12-outfits plan.  See, I'm required to pick two neutrals...which isn't at all hard, but I can only use 5 total pieces of additional fabric for the accents.  In other words, I couldn't have black and gray for my neutrals and then have two royal blue pieces made from different fabrics...if I had two royal blue pieces, they would have to be from the same fabric.

So that means a MINIMUM of six garments from the two neutrals, unless I manage to squeeze multiple garments from a length of fabric.  Twinsets R Us and all.

This may complicate things; if the picks for the month happen to be all accent pieces I could be in trouble.

But I have decided on ONE garment....my Epic Trench Coat from 2014 has never actually made it into a SWAP wardrobe; it was the only piece of the plan I actually finished that year.  And it will work well with the color scheme, so it's going to be my pre-made garment.

Which means I can't use the taupey brown again, as I don't have any more fabric to use for even shorts or something.

So more pondering, with decisions to be made this week after the new scarf inspirations and the January choices are up.  I'm kinda curious to see what scarves are chosen this year; I confess, last month I did a pretty thorough look through the Hermes site and picked out six scarves that I think met her criteria for wardrobe inspiration...so I'm curious to see if I guessed right.

Just so Facebook has a pic to put with the post when I link it up, here's a reminder of the inspiration scarf for this year's new wardrobe: 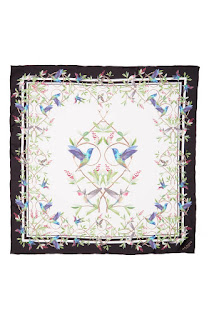 In other news, I ordered some more dark green fabric in case we use it again in choir next December.  A piece of poly/lycra stretch velvet, which I hate sewing and am not fond of wearing, but the COLOR was just gorgeous.  A yard of sequin-encrusted lace and  some forest green poly chiffon.  No pictures, because my cutting table is currently in use as a Christmas wrapping station (oh, yes, we traveled for the holidays so our family Christmas gathering will be January 1st...the 8th day of Christmas, for those who track such things.  I still have the trees twinkling and the Christmas music playing and everything.  Bucking the culture, but it works for us.... ;-)

2018 sewing recap post coming sometime soon...not that there's that much to recap, lol.  Next year should be different...
Posted by Lisa Laree at 12:41 AM No comments:

Hanger shots are pitiful...but, I probably won't get this worn till next week, and then the festivities will prevent a true blog post.

Last January, I ordered a couple of pieces of forest green knit...a 4-way jersey and a ponte...because we had been using that dark green color in choir in December and I had, like, nothing.

Sure enough, the forest green came up again this year.

So I pulled out my jersey, and discovered that it had a serious void running all the way across the fabric about 7" from the end.

Then I remembered...I think this came from the roll ends page, and had a note about a flaw.

So, well, I cut it off at the void and then had to pick the pattern based on the length of fabric I had left.  I had intended to make Vogue 8691with the flouncy bits because I thought it would move so pretty, but, well, there just wasn't enough.  I played with some other patterns, but it pretty much boiled down to a plain T...or I could make 8691 without the flouncy stuff.

So I squeezed the 8691 onto the fabric and had enough, since I was cutting the neckband from the waste bit past the flaw.

I wasn't in choir the first two Sundays anyway; last week I made do with basic black and a black and green scarf.   I won't be in choir next week, either, and I don't know if I'll get laundry done in time to wear it on the 30th.  But I have it now.

And it would look better a bit longer.  But there just wasn't enough fabric for me to add even an inch and a half to the pattern, so I just went with what I had.  Maybe I'll hunt around and add lace or something sheer to it later....but it'll do for now. 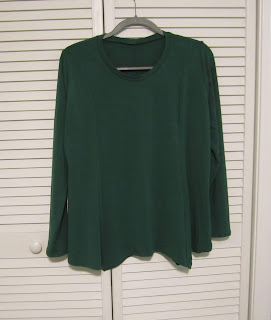 I clicked through on Janice's links from the December Outfit-a-month post and, based on her recommendation,  splurged on a Lands' End sale and got a pair of dark green stretch velvet jeans and, except for being a little long (I didn't order petite), they actually fit well.  And they look good with the sparkly gold print on forest green long sleeved T I bought to go with them.  And, I believe they will work well with this top also.  So I've pretty much got the Christmas party outfits set, even if I don't wear the dark green for choir this month.

Maybe I'll clear the Christmas prep off the cutting table and see if I can squeeze in one more top...ever the optimist...
Posted by Lisa Laree at 7:02 PM No comments: