So...these fabric in/fabric out totals are Before Christmas Costuming Started. reflecting the fabric left in the stash at the end of the year...as best I can run it down, anyway, lol.  I dug through the fabric that was left and matched it up to emailed receipts...I at least wanted to account for the stuff I DIDN'T sew...

Misc. Church Sewing:
armbands/ yellow stars for Holocaust Remembrance dramatization
Pants, tops and tabbards for two Angel costumes
7 tiny sheep toppers
One black under-robe
I think.
I am not even sure I recorded everything I did...it just got crazy at the end.  So I'm wiping the board and starting fresh.

And hoping to actually get my 'December Outfit' sewn up this weekend.

Laundry and sewing is the plan for tomorrow....
Posted by Lisa Laree at 9:53 PM No comments:

What Happened to the 12th Month's Outfit? 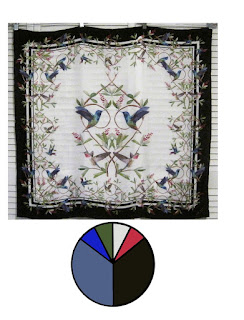 I have debated a while what to do.  Should I just consider that I blew it the last month, write it off and start over?  Or should I let it drag into the new year?

Well, I decided that, since my sewing got diverted to volunteer work for the last six weeks...well, for the last two months, if I'm honest...of last year, I would cut myself some slack.  I'm letting myself sew that last outfit this month.  So...sometime in January, I'll post what I come up with and finish out the year.  Yeah, I missed the Christmas party season with the fancy clothes but, if truth be told, I didn't have anything on my social calendar that required fancy clothes anyway.  So I'll finish up this month and still have something dressy in the closet should I need it.

I have some black stretch velvet to hand, and I ordered a bit of textured royal blue stretch velvet that should be in hand by the end of next week...one of those things will get used.

I'm going to see about doing a little analysis of what I did last year, too...probably in February.

But I plan to sew some fun stuff in the next few weeks as well...stuff I wanted to make last year but were pushed down the priority list by the 12 outfits assignment.

Interestingly, Janice has chosen more, um, economical scarves for this years 12 months/12 outfits exercise.  Have a look-see; you don't have to buy a pricey Hermes scarf to have a good wardrobe foundation. ;-)

The Rest of the Costuming...Christmas Time 2019

Once I had the Angels signed off, or mostly signed off, anyway, it was time to get crackin' on the rest of the costumes.  There was a whole shopping crew who was scouring local thrift shops for things like overcoats and leather jackets and such, but there were some things that had to be made.

Like the Tiny Sheep costumes that would be worn in the kids dance number that opened the show (it was part of the plot...Mom and Sister watch Little Sister in the school production).  Anyway, we've done Tiny Sheep before, when we did the first, much scaled down, version 4 years ago.  And I covered my sewing room and myself in feathery fleecy bits from the faux fur we used; got it down in my bronchial tubes and had a hacking cough for weeks.  Those were about 5 sheep, who were, oh, about 9.  This year's production had 7 tiny sheep, who were all about first grade.  The original costumes were much too big...so we made another batch, in a slightly different shade of white (the original fleece came from Hancock's...so it wasn't going to get matched).  THIS time, I called a work day to make those puppies at church.

Since we are in a recycled high school building, there is a room that used to be a home ec sewing lab.  With LOTS of outlets...some of which stick up from the floor and are a tripping hazard, lol.  It is currently used by our usher/greeter team, and they have stuff stored in the cabinets...pens, offering envelopes, packaged communion sets, etc.  But we got permission to come in a couple of weekends and set up for sewing.

And the sewing team was pretty much the same folks who have been working on the sewing projects since day one.  There were a couple others who came in and helped, and The Princess herself (oldest DD, to those who are new to the family, lol) brought in her sewing machine; she had volunteered to make the circle skirts for the partner dancers in the 50's scene, so she brought that project in.  I had another crew working on mending/ironing;  Miss A had picked up the fleece for us, and she cut out all of the sheep vests while I worked through who -needed-what additional pieces on the bible costumes. We were flying on a wing and a prayer on the sheep; I had only been given sizes, not measurements, and I altered up a Jalie T shirt pattern based more on gut feeling than solid reasoning, knowing that the Jalie T had negative ease and the Sheep costumes (basically, sleeveless pull-on v-neck tops) had to gracefully skim the kids.  I was kinda skeered to do it, but we were out of time and one plan after another to actually get measurements fell through.

I handed Miss A a coverall apron and a face mask to cut out.  She protested that she wouldn't need them, but I insisted and she gave in.  Of course, by the time she'd gotten them all cut out (a front, a back, two tail pieces and two ear pieces...the ears were lined w/ broadcloth) she was covered in fleecy  bits.

Then, basically because I was the one with the serger w/ the white thread, I got to sew them up.  Wearing the apron and the face mask, of course, lol 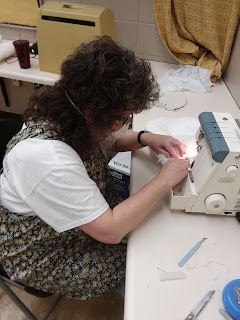 That fleecy stuff is a BEAST.  I did a bunch of unsewing and grumbling, but they were finished by the costume check....vests, tails pinned on, and ears to be pinned to headbands. 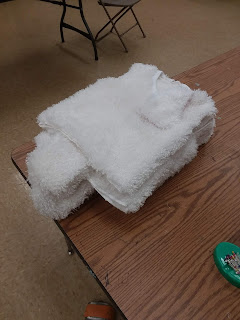 The best news of the week was that they put them on the kids and they all fit.  HUGE sigh of relief; and I told our director that, with all due respect, the sewing team requested that we cast any future sheep dancers according to who will fit costumes we already have, lol.

The next last-minute project was black sleeveless bible robes.  We have a quilter on our sewing team who made the most FABULOUS costumes for the Wise Men.  I wish I had a photo...they were amazing pieces of art, pieced and trimmed...a full length vest and an overcoat, with a coordinating turban/hat.  However, the vests only closed with velcro and they didn't offer good coverage.  Our seamstress recommended that we put black t shirts and sweat pants on the guys under the garments...but I wasn't about to put those fabulous costumes over street clothes.  I bought a whole bolt of black poplin from Wal-Mart (a store employee actually came up to me and asked if he could help me find something!  After I picked my teeth up off the floor, we had a really nice chat and he found some suitable black fabric, as well as some other pieces to make head drapes).  On the second work weekend, we cut out three bible costumes sans sleeves, to be worn under the vests.  I brought home one, Miss A took home one, and one of the other volunteers took home the 3rd.  We had to have those done by dress rehearsal the following Friday.

On Sunday's rehearsal, a week before the show, one of the worship staffers was designated to watch the run through and we were told that if she had any comments/notes on the characters, we were to follow her instructions.  Now, the character I was playing was the person who was hosting/organizing/ whatever the afore-mentioned children's dance.    The phrase 'school principle' had been used, so my plan was to give my standard line 'thanks for coming, bathrooms are (here), please silence your phones, no flash photography, yadda yadda, enjoy the program!'   in a warm, welcoming, professional manner.   I planned to wear dress black pants, a white shirt and a red boiled wool jacket with a nice little holiday pin on it.  Well, Monday morning my friend on the worship staff came to my office. 'Did your kids watch The Magic School bus?' she asked.  Oh, yes, of course they had.  'Well, I'm going to need you to put some Ms. Frizzle in that character.  She needs to be kind of over the top Christmassy'.

I had no Ms. Frizzle garments in my wardrobe.  I had a luncheon with some friends just down the road from JoAnn's that day, so after the lunch I buzzed down to JA's hoping against hope that they  had something useable that wasn't more than $5/yd.

'Christmas Toys' was the name of the kids show that I was introducing, and I knew Ms Frizzle would wear a dress w/ a Christmas Toys print.  I didn't have time to make a dress, but I thought I could manage a pull on skirt.  Wonder of Wonders,  one of their least expensive Christmas prints was...Christmas toys. At $4.00/ yd (and that was 50% off the marked price of $7.99)  I bought 4 yards, and a blinky Christmas Lights necklace, and proceeded to make a Mid-calf length version of a Basic Dickens Skirt. Cut it out that night, but I did my black Wise Man underrobe first, so it was Friday morning before dress rehearsal that I actually finished the skirt.  I told The Princess about my character shift, and she said she had a crazy Christmas fascinator kind of thing I should wear.  She brought it to dress rehearsal and I looked at it and thought, oh, I don't know about that.  But when I got dressed and put the thing on...yeah, I needed it.  Oh, yes...it had lights as well. 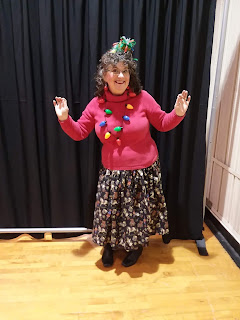 I wore that hat through the Friday Night and Saturday dress rehearsals...on stage, back stage, behind stage, around stage...no problems.  It fell off three times during the first performance Sunday morning.  Crazy.

I didn't take the time to put pockets in the skirt...I may actually go back and add them just in case I need it again some time...but I managed to make do by pinning a drawstring bag to the inside of the waistband.  It was enough for a tissue and my lip gloss, lol.

Now all we have to do is get the costumes cleaned and sorted back and stored up again.  Probably next week...I'll be really glad when that's done!