Every once in a while, I need a reminder that I really am not being unreasonable with my inclination to sew all my clothes.

A couple days ago, I had 20 minutes to spend at the local upscale mall (which is on the other side of town from me) and I slipped into my favorite ladies shop to check out the sale. In 20 minutes, I found three knit tops that fit well, two pairs of earrings and a jewelry cleaner (necessary to bump my pre-tax total up to $100 so I could use the 25% off coupon)...all on sale.

So, I thought...if I can find things that fit for close to what I could sew them for, maybe I should use my time more productively. Hmm.

But, today I found myself in the Nice Department Store closer to my neighborhood. I had a little time, so I checked out their sales.

Found a couple of tops and a dress to try on; the woven top (size M - that's the size I bought from the other store) was so small it wouldn't close, the knit top (also a size M) fit fairly well but had a boat neck that gaped, and the dress (a 14) fit nicely through the waist and hips but was hugely too big through the back and shoulders and had gaping armholes. I put it all back...and came home with plans to sew.

So...every once in a while I can find something nice, and I can get it. But mostly...if I want clothes that fit...it's gotta come out of the sewing nook.
Posted by Lisa Laree at 6:28 PM 3 comments:

Myra had a thought provoking post today about sewing those things that have been lingering and waiting.

I have several such things...pretty silks, lovely wools...all waiting to be made into something. But, for one reason or another, they have languished.

Her idea (if you click on her name that link'll take you to her post and you'll get it in full) is to bag up 12 projects that have been languishing and, once a month, pull out one at random and make it up.

I don't know if I can quite do that; most of my languishing projects are big deals. I have one that's been bagged for about 3 years...a trench coat. I really don't know if I could make it in a month or not. In a month with no other deadlines, maybe, but somehow I always seem to have to sew something with a deadline that pushes everything else back.

But, you know, I think I'm gonna try a variation on that. Maybe not one a month, but I'll start that coat in September, and, when it's done, I'll start another. Something that's been saved will get made.

Myra, thanks for the inspiration!
Posted by Lisa Laree at 1:41 PM No comments:

When I found out that we were going to wear teal in choir, I ordered some rayon blend knit from Gorgeous Things...which she cut very generously. I made Simplicity 3624, but I had a goodly chunk left, so I cut out the Jalie 965 tank top, with the intention of making a twin set. But, before I could get the cardigan cut out, I chanced across Lori's Blog Post featuring Jalie 2919 and thought, 'Oh, yeah, I have that pattern!' So...bingo!
Traced it Friday morning, cut it out Friday afternoon, and sewed both it and the tank top on Friday evening.

I've got one more weekend w/teal for choir...and I have one piece of woven cotton/lycra shirting. We'll see if that gets put together in time to wear it... ;)
Posted by Lisa Laree at 3:26 PM 3 comments: 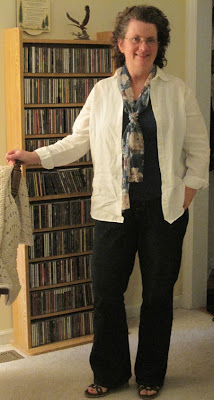 Since I posted about the TNT tank tops yesterday, I thought I'd share this because it is the newest version...in the tealish rayon/lycra blend jersey. The choir colors for this month are teal, white, brown and/or mustard yellow w/blue jeans, so I've teamed it up with a poly chiffon scarf I got for Christmas a few years back, and a linen shirt from Land's End that I've had for...I dunno...7 or 8 years at least.

With Lee bootcut jeans. Of course. ;)

I actually got three garments out of that piece of fabric from Gorgeous Fabrics; I'm planning to wear the third one tomorrow! So stay tuned.
Posted by Lisa Laree at 10:30 PM No comments:

(*Tried N True pattern)
I've been fighting an ongoing battle to keep the links in my reviews active; Photoworks has changed their formats two or three times in the past 6 years, and every format change breaks all existing links. Then Yahoo photos went away, so all of those photos had to be relocated and relinked. Then, there's a limit to how many photos I can post on Flickr; so at some point I have to move photos to archives at Photoworks so I can add new photos to Flickr...I'm tellin' ya, it is never ending. I've got about 3 different levels of broken links on those old reviews, but I'm s-l-o-w-l-y updating them. I'm just hoping to get them all relinked before someone changes something again.

But, in the process, I'm updating some pictures, too. The link for the Jalie 965 review has been broken for ever so long, but it was only the photo of the original tank top. I wanted to post photos of all the tops I've made off that pattern, just to show how truly useful it is.

But I couldn't seem to have them all out of the laundry at the same time.

Finally, today, I just grabbed all the clean ones, hung up the ones that were in the hamper, and didn't worry about the ones that are somewhere in process and took a picture: 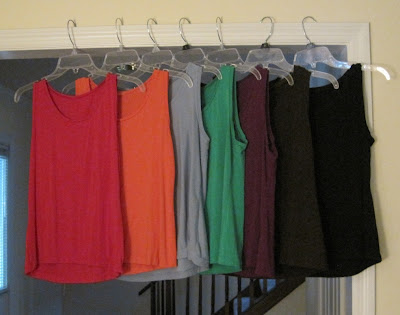 I know there are at least two missing from this picture... the original cream one, and the gray one, and I just cut out a teal one last night. Plus there's the orange-and-white stripe one I made for The Flute Player.

So, at the moment, to the best of my remembering, I've made 10 of these tops (edited because I apparently can't count...). Mostly I wear them as bottom layers, but in the heat of the summer they're fine as tank tops.

But...Jalie has discontinued the pattern, which is truly sad.

There may be a few left in stock at Patternreview...I've gotten recently OOP Jalie patterns from there a time or two. I hope Jalie reissues the tank with another pattern in the future; it's one of my absolute can't-live-without TNT's...
Posted by Lisa Laree at 9:39 AM 2 comments:

The wedding to which The Princess wants to wear her Simplicity 2442 dress takes place at 4 PM tomorrow...and this is the current state of the dress: 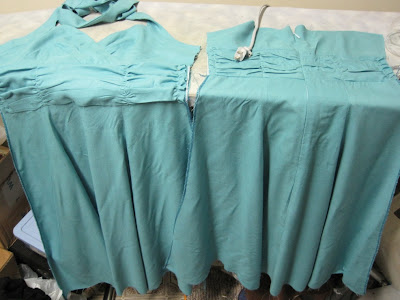 Now, in all actuality it needs:
1) Facings applied to top back
2) Side seams
3) Facings folded down and slipstitched
4) narrow machine hem on the skirt.

I think that's do-able by 3 ish tomorrow; but I've lost the back facings. I'm pretty sure I remember sewing them up as prep...but they've TOTALLY gone missing.

I'll just cut new ones. In the morning.

I can't imagine that anyone who reads my sewing blog hasn't seen this, but just in case, you've GOT to check out Birgitte's Balmain knock-off.

I don't think I'll ever attempt such a feat; I'm still trying to get it together enough to make my very own plain Jane trench coat. But, oh, to dream of making something so completely jaw-dropping!

Labels: The Sewing of Others

The Princess has been asking me to make a dress for her for, well, awhile. The trouble was, she kept asking for it when I was swamped with other sewing.

She had the pattern picked out...Simplicity 2442, and she had some turquoise rayon challis. She even traced the pattern/cut it out for me just before Easter, hoping I'd get it made for her for Easter. Unfortunately, she did that, like, four days before Easter, and I had other sewing to do and extra church services. So it was just not possible at that point.

Since then, I've gotten some rather snide remarks about having time to sew for other folks (the Honor Dress, the baptism robes...) but not for her. I keep hinting she could make it herself; I'd be glad to help. That, however, seems to be just not possible also.

We have a friend getting married a week from today; The Princess wanted to know if I could make her dress for the wedding. I've told her I'd see if I could work it in.

Then last week I had an Idea.

I am a total decorating klutz. I really am not good at it at all. When I first went to work, I asked The Princess if she could help me decorate my office...back when I had the dark brown paint left by the previous inhabitant. She flat refused, saying she wouldn't have any idea what I'd like.

Now, this is the young lady who looked in our guest bathroom and pronounced, 'This room is a hot mess!!' and went out and bought stuff specifically for me to put in there so it didn't look so, um, hot messy. I thought she'd be glad to help.

Last month, we switched offices around and I got a freshly painted office...I even got to pick the color (a blue -leaning green). I like the new color; I could live with an undecorated office before; now, I'm ready to make it mine. However,I'm still a decorating klutz. But, instead of just asking The Princess for help, I offered a swap...

I'll make the dress if she'll help with my office decorating.

So I've temporarily shelved my choir sewing and I worked on the Simplicity dress. I believe she's lost weight since she traced the pattern last spring; I had to take up the muslin of the bodice quite a bit. But it looks like it's gonna fit.

So. that's my project for the next few days.

Here's a couple of Parting Shots for your amusement:

Frisco couldn't understand why I didn't want her exactly on that spot while I was altering the pattern... 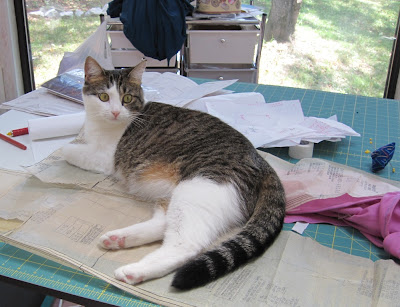 I gave up arguing with her and went to switch the laundry in the machines.
Suddenly, she turned up in the middle of that, too... 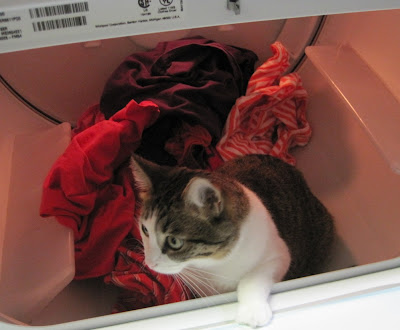 So, I guess I'll start a new series; I won't number the headings but they'll be linked by labels. We'll call this one 'Choir Wardrobe', and, when I make something new for choir, I'll post it. Not quite as regular as 'Choir Sundays', but it'll do for a while. ;)

Anyway, this month's colors are Teal, Brown, white and mustard yellow, with blue jeans. After a trip to Hancock's that honestly only netted thread (I confess to browsing through the Vogues...they were on sale...but the one pattern I really wanted wasn't available in my size) I came home and put together the Simplicity 3624 tunic top.

The only really tricky part was serging over the center front area on that empire seam; the gathers and the loop made it quite bulky and my serger could only chew on it....I pulled it out and trimmed it manually and then I didn't have any trouble.

I hope to get a review up no later than tomorrow evening. I like the top a lot and will likely make it again. ;)

I've got on the brown jalie 964 tank top under this. It's low, but not so low that a cami is an absolute necessity...for anything other than church choir. For choir, yeah, I need the cami. ;)
Posted by Lisa Laree at 3:36 PM 1 comment: