I watched the three Great British Sewing Bee Celebrity Specials this weekend...so charming, as usual...and I was determined to sew something, even if it meant staying up till midnight last night.

And I got one in the 'done' column!

Well, actually two, but the first one was just a second chop job on a T shirt.  I don't have a photo...but we were given T shirts from the DIVE school I attended (That's Deep Innovative Vertical Expression, not something involving large bodies of water).  However, the stock was running low and there were only extremely small and extremely large sizes.  So, knowing I could whack it down, I cheerfully took a 2XL and cut it down, using Kwik Sew 2900  just as I did on the one I chopped earlier in the summer.  This T was a rayon blend, much thinner and drapier than the beefy cotton on the first T so I did a couple of things a little differently: 1) placed the sleeve  pattern  on the cut -and-flattened sleeves so that the top of the cap hit the top of the cut sleeve, letting the hem fall where it may, which made the sleeve much shorter and 2) I left all the length on the top that was there.  So all I had to do was put the new sleeves on the new armsceyes and sew up the new side seams...all the hems were original.

It works.  I'll try to get a picture soon.

But I do have pictures of the second top.  It's Sewing Workshop's Eureka top, made from a stylized silver and black printed rayon/lycra jersey.

That fabric was almost my undoing.  Things were going together fairly well until I got to the hem.

I could not get a decent looking stitch.  The fabric was so stretchy that it stretched going between the feed dogs and the presser foot (even with the even feed foot attached), and when it relaxed, the stitches were all loose and loopy.  I tried a single needle and a double needle, I tried adjusting the tension...finally I fused the hem up with some old Steam A Seam and, because my new sewing machine does not have the capability to adjust the pressure foot pressure (why???  Who thinks to look for something as basic as that???) I even pulled the old Janome out and ran it through that one.  That was a little better, but it's still pretty wonky if you look closely.

Next time I make something out of this fabric I'll sew through tissue or something.  It was crazy.

But it's a kinda crazy shirt anyway. 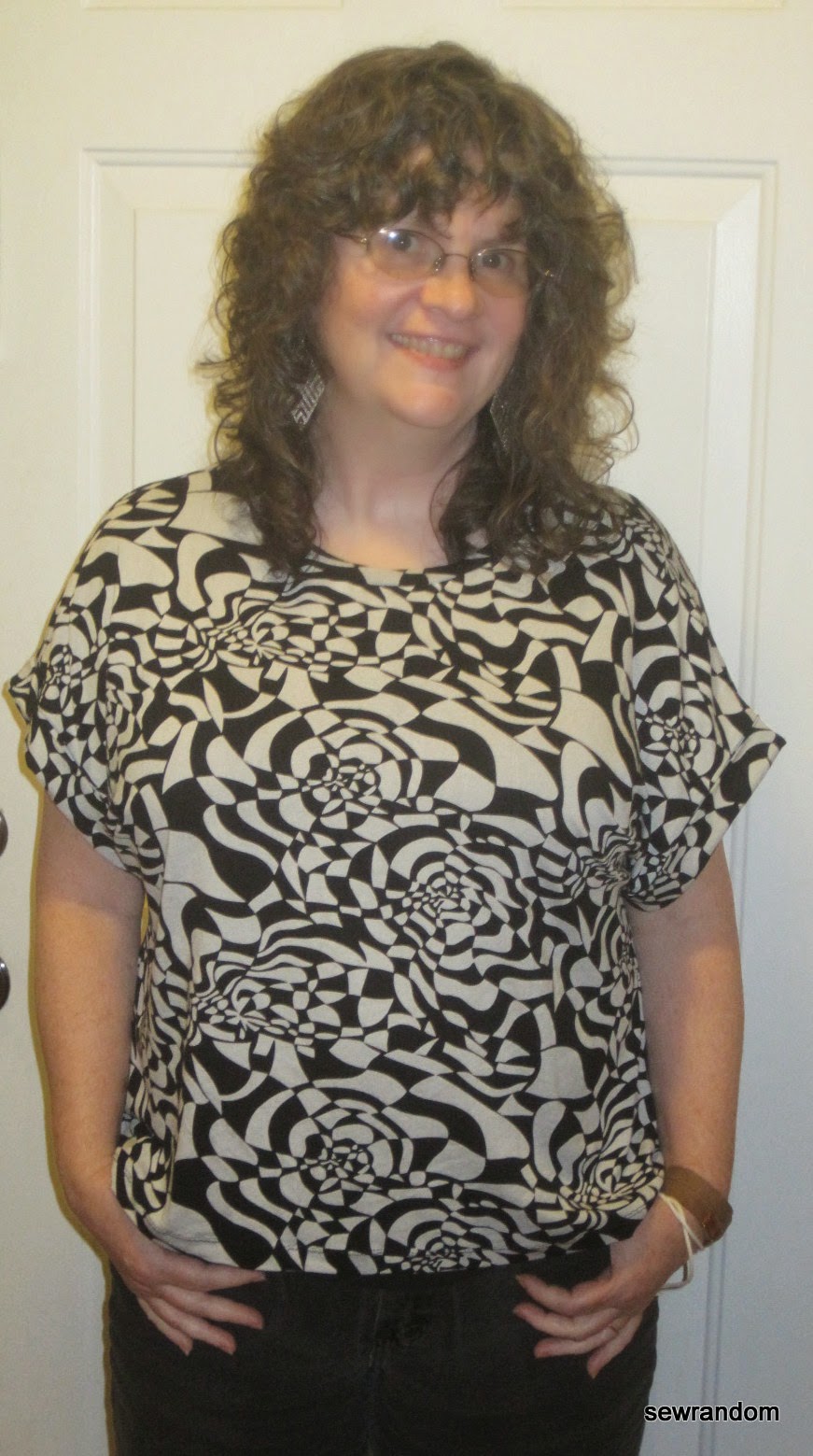 I didn't post a Choir Wardrobe photo yesterday, since what I wore was an almost line-by-line repeat from two weeks ago; I wore a different necklace, but that's pretty much the only difference.

So, for the kinda sorta weekly 'I wore something I made' post, here's what I wore to work today:

It was in the mid 80's for all that it's the last week in October, so brown linen pants (Stretch & Sew 707 - No Side Seam styling with pockets!) were just fine.

I have a remnant scarf...I think it was actually a remnant I bought for pennies and then hemmed...with woody fall colors in it, so it let me get away with the teal rayon/linen Cutting Line Stars In Heaven tunic.

Over all was a rust colored crochet vest from Coldwater that I intended to wear for choir this month...but just wasn't up for the brown turtleneck that would've had to go under it had I worn it yesterday.

Gonna see if I can get a little time in the sewing room today...and I need to update the side bar totals.  Got suckered into a couple of sales...

Which really is not a problem unless I don't sew.  But I haven't been sewing.  So...need to correct that issue...
Posted by Lisa Laree at 8:26 PM 1 comment:

Company coming this weekend means that the spare room that has morphed into the cutting room has to be cleaned up and turned back into a bedroom.

So I decided to cut several projects out...so I won't have to turn it back into a cutting room in the near future...and I have some projects that I can work on in small increments.

A Jacket muslin.  A first go at a button-front shirt.  Three t shirts and a novelty top.

And I have another mongo promo shirt that I've whacked down that just needs to be sewn back up.

That was about all my complaining back would allow at one go.  But now I've got a small bin of projects all ready to sew up.

'Course...company coming this weekend means I won't have much time for sewing this week, but, well, it'll be ready when I am.
Posted by Lisa Laree at 9:21 PM 1 comment:

The only me-made in the outfit today is the orange stretch lace top; made from the TNT pattern Jalie 2566, for which I have reviewed the cardigan but not the T (note to self: do that before the end of the year!).

The jacket was a Cold Water Creek sale find;  it's perfectly lovely, once I overlook the fact that it has no pockets.  And the pockets in the CWC jeans I wore today are shallow to the point of nearly being useless.  Cell phone, keys, leader badge and a kleenex or two nearly exceeded their capacity.

There's just a hint of color on the maple tree; we've probably got a couple of weeks before we hit the peak color season.

Lord-have-mercy, this year is going fast...
Posted by Lisa Laree at 4:44 PM No comments:

The discussion's been up on Stitcher's Guild for about a month now... I want to holler, no, wait, I'm not done with my 2014 SWAP yet...I actually only got the Trench Coat and a couple of knit tops done.  I *could* have done the rest of the knit tops on the plan, but I decided to work on the woven things...two shirts and the black denim jacket...and I didn't have TNT patterns for those.

So, amongst other things that needed sewing that weren't on the plan, I've been fiddling around trying to get some TNTs for those garments.

It took forever to actually decide which patterns were promising enough style-wise to put in the effort.

Took forEVER to get the patterns copied off.

I just cut the shirt out of some blue shirting that 's been in the stash for years.  I think it came in a bundle from Michael...back when we lived in the old house. I made some preliminary adjustments to the shoulder and to the sleeve length, so hopefully even if it's not a dead perfect fit it will be at least as good as something I could buy off a rack someplace.

The jacket patterns... I have two traced off, one for a classic jacket and one for the denim...will be muslined before I cut into good stuff.  I have no idea how the neue mode will fit; the line drawing shows some awfully low armsceyes but, as I do not have a TNT to go by, I can't really compare the pattern to anything to see if they really are as low as the artwork makes them appear.

But...it's the middle of October.  Next year's SWAP will be up and running in a matter of weeks.

Maybe I'll put those three garments into the 2015 plan and just keep going...
Posted by Lisa Laree at 4:00 PM No comments:

(For those who are new to the series, please see the link 'What's with the Choir Wardrobe?' on the sidebar...every now and then I just have to throw in the disclaimer that my participation in the worship team is NOT about making clothes for it...)

Back from an amazing week at DIVE worship school; I'll be talking about it at length on the other blog, so here I'll just say...it was transformational.  Amazing.  Incredible. Et Cetera. :-)

But, for the sewing blog, I'm back in my spot in the choir and the colors for October are burnt orange, mustard yellow,  with browns and tans.

The temps really haven't dropped to the fall range yet, so I had to go to the off-season storage to pull out my brown wool jersey Pamela's Patterns 110 Draped Front Cardigan, since that was the only brown topper I had that would work with the under layers...

We had a short afternoon break at a local mall while I was in Dallas, and I wandered into Ann Taylor Loft with a few of my fellow students, kinda thinking I'd look for a lacy top to wear over tanks.  I really wasn't expecting to find one, but I lucked out and found a nice beigey Guipure lace tank that even pretty much fit...on a double markdown rack.  The left armhole was a little gappy, but I thought I could fix it, being as how I don't think I could've bought the lace fabric for the price on the tag.

But once I got it home, I realized that I will probably NEVER wear it without a jacket or cardi over it, so who cares if the armhole gaps a teense?  :-D

I pulled out my burnt orange rayon jersey Jalie 965 Tank Top  and put the new lace top over it.  Perfectamundo.

Coldwater Jeans today.  I have seen that an investment company has purchased the Coldwater brand and intends to relaunch an online store with the name...I'm gonna watch and see if it is up to the 'old' Coldwater...

You may see that lace top many times with various colors under it.  I intend to get my money's worth. :-)
Posted by Lisa Laree at 4:36 PM No comments: