The last of the turquoise for this year...I think.

We still haven't heard what August colors will be....

But, this is all repeated.   The Jalie 2682 top that finally made it off of the WIP list back in June,  Sewing Workshop Helix pants and Pamela's Patterns Drapey Cool Cardi.

I actually finished a top yesterday; back in 2014 I went to the Sewing Expo the one and only time it was in Indianapolis and came home with three pieces of silk for tops...one was turquoise.  Or so I thought.

I made up the New Look shell that I've become enamored of in this lovely jacquard charmeuse...and then put it up against my other turquoise garments only to discover that it really isn't turquoise; it's more of a muted jade green or teal.

I wanted to wear it today, but, well, it just wasn't the right color.

But at least I have another pretty top in my closet!  I'll try to get a photo soon.

Posting may be very sparse for the next few weeks; we've got some stuff going on (nothing bad, just, well, when it rains, it pours; I'll post about it later), I won't be in the choir for nearly a month.  But don't fret...I'm not going anywhere.  Just gotta spend time elsewhere for a little bit. ;-)
Posted by Lisa Laree at 10:21 PM 3 comments:

The reduction of the turquoise in the stash continues...

And the photographer was in a hurry.  Can you tell? :-)

This is a Jalie 2566 Tshirt in a nice,firm cotton/lycra jersey, cut out and sewn up in the last couple of days.  I have two sizes traced off...one for loose floppy knits that seem to grow and one two sizes larger for firmer, stable knits.  This was the larger size.

Modified Loes Hinse Oxfords...basically, I just shaped the legs into a more bootcut style, which I like very  much.

I have one more top cut out to the neckline binding (the fabric is jacquard silk charmeuse and the binding is cut on the bias; I was working on it late at night and decided for the best chance of accurate cutting I'd wait till a better, more alert time.  Which hasn't come yet).  It might or might not get worn next week; after I pulled it out and compared it to the rest of my turquoise, it almost looks jade green.  Except, of course, when I put it next to something green.

I don't know yet what the August colors are. But  it doesn't  matter much as I will be tied up in other stuff and will only actually be in choir one Sunday in August.  I can probably wing it with the existing wardrobe, whatever it turns out to be.  I'm likely going to have to sew some stuff for September if my hunch on that is correct.

I'm missing my sewing time.  I really need to get into the sewing room.
Posted by Lisa Laree at 5:39 PM 1 comment:

So, this month's colors are still black, white, grey and turquoise.  I will freely admit that the color I'm wearing is more cerulean than turquoise, but, well, I'm not the only one wearing it so...it blends.

And the only thing I'm wearing that I actually made is the Jalie Cardigan that I've worn over and over this summer.  But I can mix it up, so, yeah.

Gray RTW...the brand escapes me at the moment... jeans and a white Lands' End tank top.  And a loopy scarf type deal that is really just a massive crocheted ring, doubled upon itself several times.  It was a Christmas gift a few years back from my sister, who made it.

I said I had some of the bright turquoise knit leftover from the Jalie Cardi you've seen a couple of times this summer.  I found it and used a bit to make up a rather altered version of Hot Patterns Fast and Fabulous La Strada T.

I made it last right after I bought the pattern, back in 2015.   It was NOT compatible with my short narrow shouldered self; that version was worn for PJ's a few times and then went into the donate stack.

I hacked up the pattern a bit...narrowing the top, widening the bottom, shortening it and making the front-facing a cut-on instead of a sew-on.  And I rather arbitrarily selected a spot at which to quit sewing the side seam to allow for armholes, as the pattern did not have one marked.  The armsceyes are snug.  Not uncomfortable, but not flowy like shown on the pattern envelope.  I may add a bit of a wedge to the yoke to give them more drape without drop...

I'm much happier with this iteration.  It's not quite perfect but it's certainly wearable, which is more than I can say for the original.

Anyway, for the June/July choir wardrobe colors of white, black, gray and turquoise,  I put my new top with some 12-year-old embroidered linen/rayon Stretch and Sew 704 'Quick 'n' Easy Pants'  and, of course,  the ever-present Burda waistcoat.

I confess, I had a MOMENT when I was ironing the pants last night, recollecting making them during the time we were renting a smallish house between the house we had lived in for 20+ years and our current abode, and suddenly realized that it has been 12 years since we moved  to the current address...which means the pants are 12 plus years old.  In actuality, they were part of the first SWAP I completed, back in 2005, before I started blogging. (goes to look for photos... finds them...) 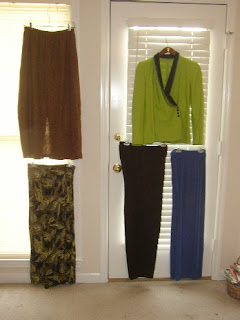 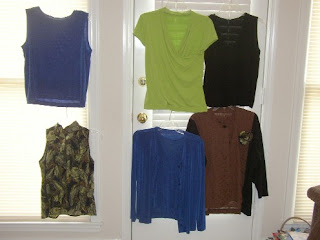 Most of this no longer fits, or has gotten worn out and is long gone.  :-(.  But, the rayon/linen embroidered pieces..the black pants, the brown lantern skirt and the color-blocked shirt/jacket, are still in the closet, still getting wear.

But it made me think...maybe I should do a serious closet purge.  If I'm still wearing 12-year-old garments, I could, possibly, be just a tad out of fashion...lol.
Posted by Lisa Laree at 4:07 PM 5 comments:

Choir colors for June-July are black, white, gray and turquoise.  There will no doubt be more repeats from June, as we had the same colors for June.  I have found some turquoise in the stash but...haven't managed to get to the sewing machine.
So, it's the same Jalie cardi I wore two weeks ago, with a black-and-white stripe Simplicity 2603 gathered-front tank top...with RTW black jeans.

Hoping to get into the sewing room this week, even if it's just for a wee bit.  I have some plans...lol...
Posted by Lisa Laree at 10:26 PM No comments: