August 5 was the day that we celebrated the 'grand opening' of the new church auditorium...the gymnasium of the school that we bought...that had been gutted and rebuilt.  We had special services every Sunday this month in celebration.

From the back office/data entry position, it was like having a month of Easter.  Awesome, amazing weekends, but a lot of work.

Plus, we had a trip home for  my folks' 60th wedding anniversary, My Sweet Babboo's 45th year high school reunion, and the 104th annual Pippenger reunion.

Needless to say, no sewing happened. At least, no personal sewing.  A team of us did make something like 50 sashes to be embroidered to wrap on the chairs to reserve them for ushers/pastors/ leaders w/ duty, etc.  That happened right before we left town.  God bless the lady who did the embroidery.

So I'mma just gonna talk about some plans that I've got on percolate but haven't really gotten to.

I did cut out the gray Brussels Washer Linen pants.  They are sitting on the ironing board, right where I put them after I cut them out.  First step is to reinforce the crotch curve; I've heard that Brussels Washer linen tends to stretch out when worn.  I've got some fusible tape to put on it.

I should put it in the 2018 projects list...since this is like, the first thing I haven't just cut out and sewn up.

Plus, I happened to wander in to Charming Charlie (one of the few that hasn't closed) early in the month...or maybe it was late last month...wow, the selection has dropped considerably.  But I did find an interesting navy/white rayon/lycra jersey tunic that came home with me for probably less than I would have spent on the fabric. 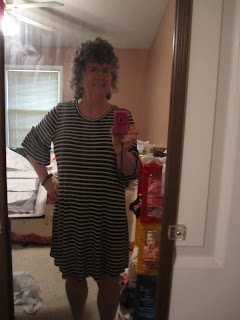 It actually was a pretty close fit, but the shoulders are wide and the armholes low, as is usual for these things,  so I took the sleeves off and opened the side seams.  I need to raise the underarm somehow; I can't just recut it because the armsceye is about an inch below all my patterns.  So I may have some piecing.  And I want pockets in it somehow.  Thinking I'm going to do some color blocking with solid navy godets and pockets in the side.  Maybe.

I have an aunt (I would say elderly aunt as she's in her mid 80's, but elderly doesn't do her justice.  She hasn't slowed down a bit) who had some fabric she said she wouldn't use, so she gave me two garbage bags' worth while we were on the farm.

I glanced through it there but didn't really dig into it until I got home.  There were a couple of pieces that went straight into the donation bag...do you remember that 80's poly stretch terry that we all made athleisure stuff out of?  Yeah, that went in the bag, as well as some yellow poly linen look.  But the balance of it...maybe... 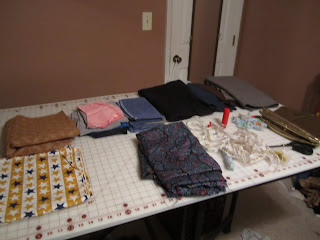 There are a couple of pieces that might make tote bags...or corn hole bags, lol...but there are some linings that I'll use to make pockets, some nice wool remnants that I'm going to have to use carefully, because there's not much, and one gorgeous bit of rayon challis that I'm guessing is from the late 80's...jade green, hot pink and royal blue paisely on black.  I had a whole capsule wardrobe based on those colors back in the day.  There's 3 yards.  Lots of options for that.  Oh, and there's also two yards of gold lame'...the same stuff I used to make all those Pippin shirts.  No idea what to do with it.  Can't imagine what Aunt Wilma got it for, unless it was some crafty thing. There's a bit of gold-and-white lace that may have been intended to go with it.

I haven't tallied this up for the stash; not sure what I'll do with it.

Because I haven't sewn,  part of my recreation has been filling up my shopping cart at online vendors, dreaming about it a bit...and then deleting it.

But one piece managed to actually make it through check out. 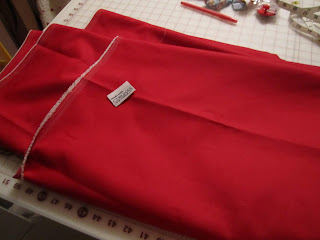 I've been looking for a rich red denim for a denim jacket for the longest time and when I found that Ann had some, well, I actually bought it (the photo is off; it's not nearly as orange-y as it looks).  It's already pre-washed and ready to sew.  Whenever I can manage to get to it.

Hopefully September will be a little more forgiving and I can get to the machine.  It is National Sewing Month, after all...