At least the choir wardrobe pretty much guarantees at least one post a week! :-)

I did spend a little time in the sewing room yesterday and cranked out another McCall's 6559 Maxi.  Pictures as soon as I can manage it...

But today was the last day for August's coral/black/gray combo. 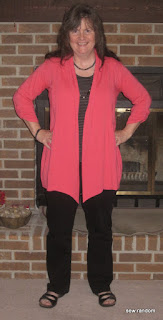 I had a long sparkly necklace on, but during 2nd service I was working on data entry in my office and the necklace caught on a corner on my desk and the jump ring at the clasp failed.  If something had to break, that was a good thing as it's easily repairable...just need to sit down for a minute with my needle nosed pliers.  But it's not in the photo and you totally miss my attempt to get on board the multiple necklace layers train...

Back again after a quick trip last weekend to Indiana to visit our parents and celebrate our 35th anniversary with a side overnight trip to Turkey Run State Park...one of my favorite places on the planet.

We got back Wednesday night, and I had a grueling 3 1/2 hours in a dentist's chair the next morning to put a car in my mouth...er, prep 6 teeth for crowns.  I now have a six-tooth temporary crown in place for the next 10 days whilst the permanents are being made; I've joked that it's a Barney tooth....totally non functional but keeping me presentable.  I'm being Very Careful as to what I eat...

So, no sewing to speak of has gotten accomplished in the last two weeks, which is ok as there is plenty of gray, black and coral in the closet.

This week it's a gray rayon jersey Sewing Workshop Ann's Cardigan, which is really way too big in the shoulders and more than a little aggravating but definitely worth tweaking and making again, over an ancient coral rayon jersey Vogue 2925 shell top , which is over a charcoal gray Jalie 965 tank.

And, since we were headed south on the Pennyrile Parkway and therefore going right by the Vanity Fair/Lee Outlet in Hanson, KY, we stopped for a little wardrobe refreshing and I found a pair of really black jeans to replace the ones that have faded to dark gray.  We'll see how long I can keep these black. ;-)

I did a bunch of cutting out in July; going to try to get some of those projects sewn up in the next couple of weeks.

Crossing my fingers...the women's conference is just around the corner; I may be busier at work than I'm expecting...
Posted by Lisa Laree at 6:58 PM No comments:

I can pretty much guarantee it will be all old stuff for August; our colors for this month are black, gray and coral.

I have plenty of black, gray and coral in the wardrobe from past years, so  there's no need to crank out more at this point.

Black Lee jeans with a dove gray ...fine cotton?  It's been too long...jersey made up in a sleeveless version of  Jalie 2682, topped by a variation of my favorite knit cardi pattern, Jalie  2919 in a rayon blend jersey.

However, next month the colors are going to be black, white/ivory and gold, which are the colors for our women's conference that will be happening the 10th - 12th, themed 'She is BRAVE'.

And I have a metallic gold half calf skin waiting on me to be very BRAVE and make it up into a vest.


My Sweet Baboo's brothers are both active Barbershoppers...one sings with the 'Voices of California' chorus, which is based in Sacramento, and the other sings with the quartet 'New Found Sound' in Pennsylvania.

Well, this year the VoCal chorus (clever nickname, no?) attended the week-long Harmony University in Nashville, which was capped off with a showcase concert of sorts in which VoCal was one of the featured choruses.

So of course, we loaded up the van and took a quick road trip up to Belmont University campus for the event last night.  We could not pass up the opportunity to see a live performance.

It started at 8 PM.  Which was a good thing, really, as it meant we could wait for The Actor to get off work.  Prince Charming had some other things going on, so it was just the six of us in the van...which I don't think has happened since Christmas 2010.

Now, you know, we are probably the least musically talented branch of the family, but we can sing...sort of.  Church Choir, family Christmas Caroling...but this was a whole 'nuther level of musical exposure for the kids.  Most of the audience were HU participants; although it was open to the public, it was very much  a show celebrating the shared experience of the week, with lots of inside jokes.

There was even a bit of audience participation singing at the beginning and end.  'Let Me Call You Sweetheart' was led by an elderly gentleman that we met after the show when we were chatting with DBIL...who told him that we were 'non-barbershoppers'.  He dug in his shoulderbag and pulled out pins for all of us. 'You sang with me!' he said, passing them around.

It was an amazing evening; I haven't had that much fun in a long time. Bad jokes, wonderful music, and lots of standing ovations (seriously.  My quads are slightly sore today from the up-and-down.  And...embarrassing side note...as I sat down after the first one, the back of my head kinda bounced against the pot belly of the guy behind me, who hadn't sat down yet.  After that, I checked and made sure he sat down before me...).  But on the way home, one of the boys commented, 'I think we've just been initiated into a cult....'

The show ended at 10:15;  it was 2:30 AM before I actually hit the hay, and we had to be at church at 8 AM this morning.  I just kinda pulled the first thing out of the closet that met this month's criteria...we're wearing black, gray and choral for August...and headed out the door.  No makeup, no contacts...but I was there. ;-)  And...I had a fresh appreciation for the gift of being able to sing, even if it's just in the middle of the choir.

All in all, a very good weekend.