So, the Princess has finally managed to get the family to schedule a joint vacation to see the mouse down in Florida.

And apparently the mouse hosts a halloween party that starts in August.  So it will be happening whilst we are there.

So, of course, the crazy crew are all discussing costumes because the mouse actually allows adults to come to his halloween party dressed up.

My Sweet Babboo is just going to don his frontiersman gear.  The Flute Player is rounding up items to look like Rapunzel in the hang out in Wreck it Ralph 2.  The Artist is adding touches to his pirate personna. The Princess is going to be Sally from Nightmare before Christmas.

And, after much deliberation, I figured my best bet would be a icon of the industry. 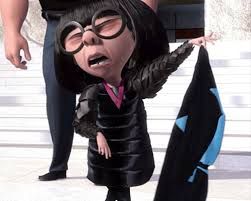 But there's no way I'm going to recreate that dress...which looks like a it was made from a sleeping bag, lol.  The sharkstooth leather sleeves are beyond me in more ways than one.

So, instead of trying to recreate E's dress....I thought I'd see about creating something she might wear.

Here's what I have to start with; it's the 'wearable muslin' for the Burda dress I made for the February wardrobe challenge (wig and glasses were Amazon finds):

It would probably work as is, but I'm thinking it needs a bit of red on it somewhere.   Thought about a red grosgrain ribbon running from the left shoulder down into the pocket, crisscrossed with another going from armsceye to armseye at the upper chest.  Or I could just do a little V at the neckline, which would be more reminiscent of the original.  I also think I need to shorten the dress about 2".

So I am open to suggestions.  Anybody have any ideas that would be a lot of bang for the buck (and time, as I don't have much?) LOL.

Posted by Lisa Laree at 5:13 PM No comments:

Ok, I've been pondering all week what I want to do for this month.

I could totally pull it from clothes already in the wardrobe.  And, if I run into a time crunch, I might.

But I am pondering a new skirt.  I have a pattern (out of print Butterick) for a bias cut skirt w/ a side godet...it would be swishy and look cool with boots.  Of course, I would have to add pockets, because, you know, that's what I do.  But that would let me move the side seam zipper to the interior of the pocket and hide it, which I always consider a good thing.

And I have some black twilled tropical weight wool that I bought a number of years ago that I have been stewing over.  Because of the black/white threads (it was sold as a 'wool denim-look'), it has a pretty noticeable diagonal on it, which made it really, really hard to decide what to use it for...and how to use it.

But it occurred to me that, with a bias cut, I could run those twill lines vertically and they would look like pin stripes.  And my little brain went Hmmmm....I could add a kinda quirky skirt to the wardrobe AND make use of a tricky fabric.

The pattern is just  a front and back piece (one piece) and the side godet...it shouldn't be too hard to fit.  Oh, and it's lined.  Or, at least, there are instructions for lining it.  I will add a waistband with a touch of elastic (instead of interfacing) so that it has a bit of stretch.

At least, that's the plan.  About 10 years ago, I made a really cool black wool boucle up into a Sewing Workshop Plaza jacket that would look great with that skirt and boots.  Not sure about a blouse under it, though, it works better with a turtle neck.  so we'll see.

And I have a brooch that I wear with that particular little jacket as a closure, so that would work well, too.  I'm gonna substitute earrings for the ring in the accessories; my stubby little fingers do not take rings well.

So, now it just depends on how much sewing I can get done in the next three weeks.
Posted by Lisa Laree at 2:21 PM No comments:

12 Months 12 Outfits - August Assignment: Do I really want to do Fall yet?

Heaves a big sigh as the reality that it is August 2nd slaps her face...

Here are the August outfits over at Vivienne Files.   Janice stayed with the pattern in previous years, but this month she built the outfit around tall boots.  Last year's August picks included a range of boot styles, but this year it's all about the tall boots.  And every outfit includes a skirt, a blouse (woven)(ETA -- no, there is one Eileen Fisher t shirt in the mix.  I thought it was a soft woven until I clicked through), a sweatery cardigan, with a ring and a brooch for accessories.

Now, I will be straight up honest with you; anticipating this, I was already preparing my little commentary of how, in Alabama, we don't need fall clothes until October.  When my kids were growing up, I didn't even do the seasonal clothing switch until Fall Break...which was usually the first full week in October.  Didn't buy new clothes for the school year until I saw what still fit...and what didn't...from the previous fall/winter season.  There just wasn't any point in it if the temps in the daytime still made it up to at least 80 degrees most days.

But my arguments have dissolved in the face of those tall boots.  See, I have Very Wide Calves, and tall boots that will zip all the way up are like, the Holy Grail of shoe searching.  I bought some a few years back; the style was kinda stodgy but they zipped so I just worked with them...and I really didn't wear them that much.  But, despite the fact that they were made by Maine Trotters, which is supposed to be a high-quality shoe, they have not held up.  The leather is tearing along the stitching lines...just like a perforated piece of paper.  One of the decorative tabs on the back has come off, and the zipper guard is flapping on one of the boots and really won't last much longer before it tears completely off.  So, after last year, I told myself I would need new black boots for this year.

About two weeks ago, looking through Zappos site, I saw that the sandal selection was dwindling.  Several of them I had flagged as favorites were no longer available in my size, or were only available in a few colors.  Suddenly, it hit me that if I wanted the best selection of boots...maybe I should start looking now.  I cruised through and found one style with a wide foot...and what looked to be a reasonably wide calf, although it wasn't marked as a wide calf boot, there was a significant gap between the boot and the calf of the model in the video.  And it did have elastic gores in the back.  So I put it in my favorites to watch.

While writing some reviews for shoes last week, I went to my Favorites page and saw that those boots I had put in the Favorites list were on sale for less than $100.  So of course, I ordered them.  Immediately.

They have arrived and I have tried them on.  I had to WORK to get them zipped, but they just. barely. did. zip. I was wearing moderately thick socks; if I were to wear thin socks or tights it wouldn't be so bad.  The wide width foot fits well and is cushy...I'm just now trying to decide if I want to keep them and wrestle to zip them.  I may try another pair with a wide calf...but there are only a few in my size and price range.  So I'm likely to need to order quickly.  At least it doesn't cost anything to try them on, other than the hassle of returning the ones that don't fit.

All of that is to say....maybe it does make sense to build an outfit around tall boots in August despite my earlier plans.  Even if I don't wear any of it for two months, lol.  So I will be pondering the skirt/blouse/cardigan options while I make up my mind about the boots.
Posted by Lisa Laree at 11:00 AM No comments: