Somewhere there's a button and a link for the top five, but I'm too lazy to go find em and link up.

Besides, my top 5 projects for this year were pretty much my sewing for the year...I really didn't get much done.  Hoping that scenario changes for next year...my wardrobe is in sore need of some sprucing up.

Anyway... The Numero Uno sewing project for the year has to be the Poppy Skirts that I made for the 2013 musical, The Wiz.  I'll throw the 2nd spot to the Emerald City Citizen dress I cobbled up in about 5 hours, starting with a rather plain velvet dress and funkifying it up.

After that, it gets rather blah. I dove into a huge data migration project at work, and really had no time to sew.  Or buy milk, for that matter...it's been a crazy year.  But I did squeak through a couple of things...

I'll give the 3rd spot to the Hippie Earth Mother Tiered skirt.  I would live in these skirts in the summer, I think.  This makes two that I own...I may very well make some more before too much longer.  They are just FUN to wear... 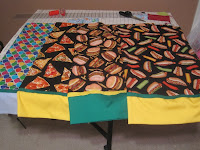 4th place would be the pillowcases for Rhonda's Pillowcase project.  There is something really powerful about giving up personal time for someone else, and I enjoyed making these pillowcases.  I hope that somewhere someone enjoys looking at them. 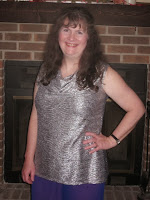 The fifth place spot would probably go to the Jiffy Pop Top, just because it was such a spur of the moment fun thing that perked up my sewing confidence when it was seriously beginning to lag.

As we still have our family Christmas in front of us (New Year's Day), my cutting table is currently buried under gift wrapping supplies.  Not finished wrapping yet.   I do have a couple of things cut out I can work on if I can catch a minute or two.
Posted by Lisa Laree at 6:04 PM No comments:

The Spirit of Christmas Past 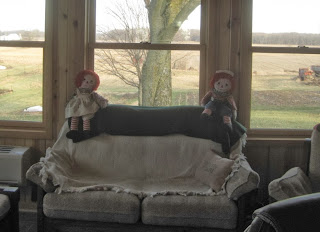 Not too long after I got married, my maternal grandmother went through a doll making phase.  Among others, she made a Raggedy Ann and Raggedy Andy set that she kept.  After she died in 2001, Ann and Andy went to live with my aunt, who lives in a small house and she recently decided that the dolls needed to go to another home.  They were sitting on my mom's sun room sofa when we arrived, and before the evening was over, Mom asked if would like them.


With the traditional sentiment embroidered by my Grandma herself on both of the dolls...how could I not? 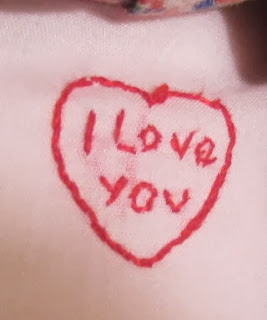 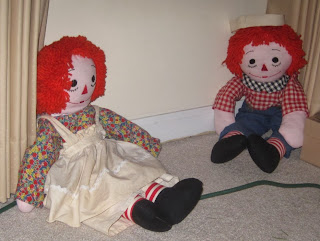 It was like bringing home hugs from Grandma. I'm not sure where I'll end up putting them, and the clothes could use a bit of freshening, but just seeing them makes me smile a sunshower sort of smile.
Posted by Lisa Laree at 9:47 PM 3 comments:

Labels: Sewing Memories, The Sewing of Others

too late for Sunday...

I admit it has been a crazy busy December; I forgot to take choir wardrobe photos on the 8th; we did take 'em on the 15th but I didn't have time to post one and, while I'm not gonna embarrass myself by flagging it as a choir post, I'll throw it up just because it's the Jiffy Pop top again...not too bad under the plaid Robin's jacket .  I'm thinking this will go into the suitcase for Christmas  day...maybe...

And I did finally finish the brown knit Oxford pants and FTA skirt.  I managed to squeeze a little sleevless t onto the remnant, and that's still in progress, but I'm glad to have the others done.  Ridiculous how long they languished for want of a double needle hem...

Don't know if I'll get back to the blog before Christmas Day itself or not.  If I don't, here's wishing all my blogsphere buddies a Merry Christmas or Happy Hanukkah, with all your favorite people and customs!
Posted by Lisa Laree at 3:03 PM 1 comment:

from Vogue 8669; I had a gift card from Hancock's, a dress-up party to attend, and about an hour...in 15 minute increments over about 4 days...to sew up something to sparkle. 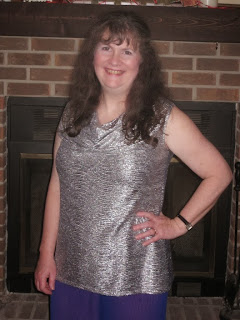 Found a very interesting lame-knit; it appears to be silver lame' printed on navy blue knit.  I saw it and immediately thought of a cowl-neck shell top.

So I brought it home, pulled out the above-mentioned pattern and, per my last iteration, copied the front pattern piece and proceeded to whack and spread and pivot my way to a full bust adjustment.  It was kinda needed on the earlier tops, but this knit did not have as much stretch as the earlier ones so I knew it would be necessary on this.

I loved the flow and sparkle of the fabric until...some point in the process I looked at it puddled up on the sewing table and saw...a pan of Jiffy -pop popcorn... 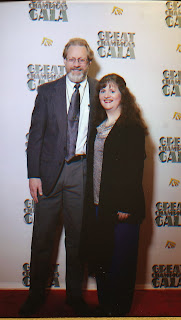 I wore it anyway.

And will probably wear it again.

Labels: Clothes for My Closet

December means red and black.  This year, we're mixing silver/grey in with it, but I stuck to the basics today.

But the cardi is one of my modifications of the  Jalie Pleated Cardigan.

Yeah, I know, I need to edit that review and talk about the modifications.  Maybe someday...

Anyway, they're both done up in a rather beefy rayon blend knit.  Somebody's jeans and...my red shoes.