After a  crazy couple of months getting ourselves moved into a facility-in-renovation and getting enough of it functional to hold Sunday and Wednesday services, our leadership has done an amazing thing:  Everybody on staff is getting a week off.  Not all at once; we've been split into 4 groups, with  1/4 getting a break so 3/4 of the staff is on hand over 4 weeks.

My turn is next week; I've got enough hours in this week that I can leave around noon tomorrow; offices are always closed on Friday.

And my hubby has a camping event this weekend.

This is the weekend I tackle the sewing room.

I'm ready for some order.

I can do this.

Loss of a Landmark...

Saw this on the news last night....logged on today to find that the fire had re-ignited overnight and there is literally nothing but a portion of a shell left.

I've been to Sir's irregularly...it is a 45-minute to an hour drive away...and the stock varied greatly; one visit would yield very little worth bringing home while a visit in 2007 saw me hauling home nearly 50 yards of deals; a good bit of which is still in the bins.  It was THE place to go to find costuming fabric; especially after the deterioration of the fabric department at Wal-Mart.

It was a place that still SMELLED like I remember fabric stores smelling as a kid.  The good ones.  With real fabric.

It was a family business; who knows if they'll try to rebuild/restock.

I can hope, but given the current status of the retail fabric business...I fear they're gone for good.

A Rather Inauspicious Start to 2018

Sometimes, the urge to MAKE SOMETHING just gets irresistible...

Last year, I bought about 4 pieces of fabric to make tablecloths.  I love using upholstery cottons; they're usually treated w/ a stain resistant finish and they're drapey and washable...what's not to love?

But I came up with a plan.

1. Buy extra length.
2. Straighten one edge; measure off 62" and pull a thread and cut.
3.  Split the remnant in half lengthwise
4.  Remove all selvedges
5. Match the cut pieces to the center of the long piece; sew the seam and then serge it.
6.  Fold carefully into quarters
7.  Mark an arc 31" from the fold point
8.  Cut on the marked arc to get a circle
9. Use the serger to roll the edge.
10.  Fray check the tail and trim after dry.

And the Sewing Urge hit, so I thought I'd sew up one of the pieces of tablecloth fabric.

But I had a problem with this particular piece of fabric....

The first time I made a circle table cloth, I didn't pay any attention to the placement of the motifs on the center line.  As a result, the large motif is slightly off center vertically.  It's not terribly wrong, but it bugs me.  So this time, I picked out the prominent motif and measured out of the center 31" on both sides.

Unfortunately, I had a fairly sizeable chunk on the end that I would otherwise have just evened up to square.  Which meant that, after I matched up the long end to the sides and folded it into quarters, the extension quit about an inch too soon.

Sigh.  I guess I'll just have a slightly short drop on the cloth.  I didn't want the off-center motif thing going on again.

So I folded it up into quarters, with the shortest side up, and made the arc 30" instead of 31" from the center.

And it sat there for about a week before I could get to it again.

When I had a chance, I trotted upstairs and cut along the marked arc.
Gave the remnant a tug but it didn't seem to move right.  Oh, the rotary cutter didn't get all the way through the layers.  Not unusual, just give it a quick little slice.

But that slice seemed awfully thick.  Did it really not go all the way through?

No! Gasp!  I had looked at the thing cockeyed and for some reason CUT UP THE PIECED SEAM .

I'm still not sure what crossed my wires, but I had a 6" gash on either side.

I don't often cry when sewing, but I confess to shedding a few tears at that point.  I really, really liked the fabric.

But, it's either fix it or consign it to tote bags, so I scooped up the circle and went to the sewing machine, where I zig-zagged those gashes shut.  They're on the drop...they won't be noticed...right? 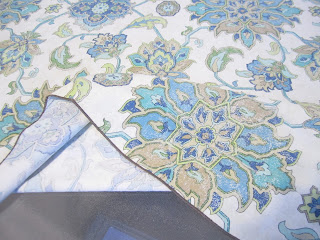 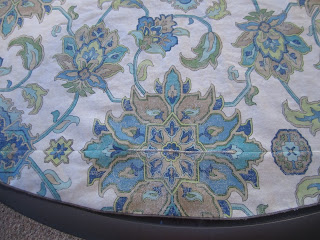 Someone's gotta look close to see it.  One is right on the seamline, the other is just off a bit.

But, whilst suturing the gashes, I noticed that I DIDN'T have the shortest side of the matched pieces up.  There was a healthy divot missing off of one end of the arc.

Y'all, I unpicked the seam a bit, whacked a square of the remnant (it was a trick to get my brain around matching that on two sides) and pieced it in. 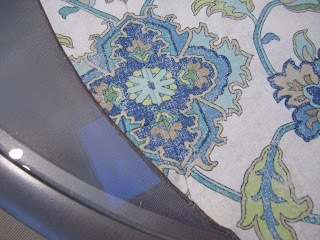 It's not invisible, but it's not very noticeable, and, given the patching already done, perfectly serviceable. 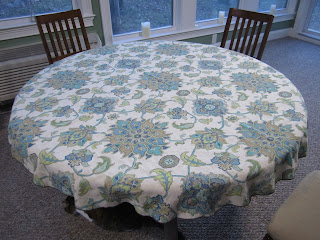 In hind sight, it probably would have worked better, matching wise, to have put one of the smaller motifs in the center.  It would have at least still been balanced.  But...it is what it is, and it'll do.

And I just realized I'd knocked it about an inch off center before I took that last pic.  Oh, well.  You get the idea.

But, given how hard I tried to ruin that, lol, I'm kind of skeered to tackle anything else until I've gotten my calm back, lol.