Alas, I finished at the end of the month and so it will not be worn for choir this year.  But it will get worn nonetheless.

The Mock T is from Jalie's Twin Set (2566).  I made it sleeveless, and the armhole needs some tweaking to be perfectly gap free as a sleeveless top, but since it will be worn under a topper virtually all the time I can live with it.  I'll work on it before I try it sleeveless again.

This is my 4th Jalie Pleated Cardigan (2919)...and would you believe that, as I put the pattern away yesterday, I noticed for the first time that those tucks should be on the OUTSIDE of the garment?  In my head, they should be inside, and I never even looked at the directions to see that my head wasn't in agreement with the Jalie designers. But...even knowing they should be outside, I think I prefer them inside.  At least on fabric as bulky as this (it's a poly/rayon/lycra jersey).  They would stand away from the garment a bit and add visual weight, I think.  If I were using a very thin, limp fabric...well, maybe I'll do it right someday.

However, this is my second major alteration to the pattern.  I worked the armsecye/sleeve head over a bit, moving the sleeve cap up and into the shoulder so that it sits more on my shoulder instead of down my arm, and I moved the shoulder seam forward at the shoulder point, adjusting the curve on the sleeve pattern as well, so now the back sleeve cap is longer and shallower than the front sleeve cap and the ease has been reduced in the sleeve so it's pretty close to a 1:1 ratio with the armsceye.

(Just realizes I should've taken photos of my changes.  I'll try and remember to do that next time I pull the pattern out). But the big change was a style change in the back:

I added a seam at the waist, and made a gore for the lower back, lengthening it at the center.  It might be a teeny bit more flattering if the back waist seam curved down as well, but it's not bad.

I really wanted full length sleeves, but I was literally ONE INCH short on having enough fabric to squeeze that full length sleeve on.  So I went with the tabbed 3/4 length that I used on my last two versions.

A Goofy Shirt for the Artist

The only other bit of holiday sewing I did this year was what amounts to a joke.  I saw a sweatshirt in a catalog that was customizable with "(NAME) The Man. The Myth. The Legend." as the graphic.  For 42 bucks plus shipping.

I immediately knew that my older son had to have such a shirt.  If you knew him, you'd know why.

However, I wasn't going to spend such a sum for what was essentially a gag gift.

Fortunately, I had some long-stashed white cotton french terry fleece in the bins and a long out-of-print Palmer/Pletsch  multi-sized sweat shirt pattern ready to use.  Light fabric transfer paper from Hobby Lobby and my minimal graphic arts skills were all that I needed to come up with a truly memorable Christmas gift.

After all, not many presents generate a reaction like this: 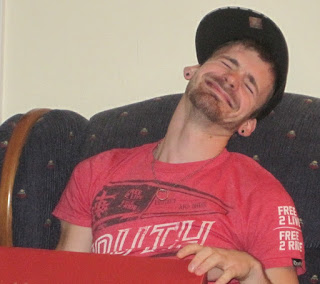 So here's the shirt, with his name in Icelandic.  I may never actually see it on him: 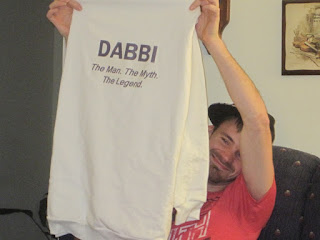 Posted by Lisa Laree at 6:19 PM No comments:

A Stocking for Prince Charming

Twenty-six years ago, My Sweet Baboo and my large pregnant self made the trip to family in  Northern Indiana for a baby shower to welcome our soon-to-arrive firstborn.  Driving 8 hours at 36 weeks meant that we stopped at every mall along I - 65 so I could walk around a bit.

At one (on the north side of Nashville near Goodlettesville...can't remember the name off hand), there was a shop with cool appliqued stockings.  We decided we'd get some, since we weren't going to go to our parents' for Christmas that year (the baby was due Jan 3).  I selected a stocking w/ Santa, MSB picked a rocking horse and, even though we didn't expect the baby before Christmas, we picked one for him/her anyway.

Back in the day, routine ultrasounds were not done and we did not know the gender of the imminent arrival, so we got a gender-neutral teddy bear.

Of course, the Princess showed up two weeks early, so we were glad to have a stocking for her.  However, we neglected to imagine having MORE kids at that point, as other kids came along we adults relinquished our stockings to them...The Artist got the rocking horse, and The Actor got my Santa stocking.

At some point, I made a pattern from  the stockings and made Mr and Mrs Snowmen stockings for My Sweet Baboo and me , and, when The Flute Player came along, I made a stocking for her with a little girl mouse on the front.

We were all set at that point.

Until this year, when we added a son-in-law to the mix.  I thought I would just buy a stocking somewhat similar to ours, but I couldn't find anything that didn't look...tacky.

Then I found out that the Princess thought it would just be LOVELY if he had a teddy bear stocking like hers.  Unfortunately, my stocking pattern has been AWOL for a while.

No matter.  I retraced it last night and used odds and ends of fabric scraps and snippets of yardage in the stash and, behold, the sort-of-matching set: 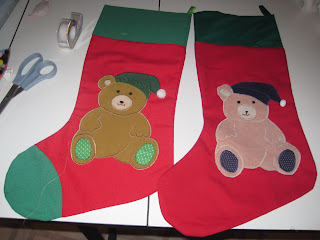 I omitted the green toe and used blue accents instead of green, but it's reasonably close.  The bear really isn't pink...it's a beige velour.

Except it apparently came out a fuzz smaller.  Not sure why...unless it's just not lying quite as flat as the quarter-century old stocking.

The Flute Player's comment: "Well, you messed up his mouth, but he's still cute."

It'll do, anyway.  At least it looks better than what I could find retail. ;-)

...and I'm late again.  Well, we were celebrating a birthday yesterday and, while I did get a photo taken before we left in the morning, I didn't have a chance to write it up.

I fudged a bit yesterday and wore a DRESS instead of blue jeans! (It is ok; I just usually don't have a dress that works).  So I felt rather posh.  Funny how different a dress feels.   ;-) 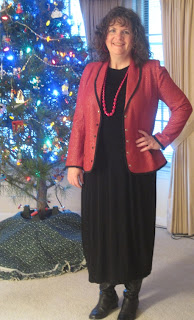 Anyway, the colors for December are black, silver/gray and red. So I wore my red/silver/black plaid wool/lurex/faux suede Silhouette Patterns'  Robin's Jacket with my black poly/lycra slinky Sewing Workshop Cityscapes dress.  That Edwardian hobble silhouette is showing up more and more; and let me just say that this dress, made in slinky, is one workhorse of a wardrobe player.  I've got 3 of them, and they see a LOT of wear.

Particularly since they are so forgiving re the whole middle-aged middle. ;-)

This is the last Choir Wardrobe post of 2011, now that I think about it.  Next week we will not have choir; we have special services on Christmas Eve and Christmas day. Not sure if we'll be choiring on Jan 1 or not; may depend on how many folks are out of town.

Therefore, while I intend to do some sewing and posting this week, we all know how my intentions have been playing out of late, so I'm going to wish everyone a Merry Christmas...just in case I don't make it back to Blogger before Saturday.

And, if you don't celebrate Christmas, then I hope December 25 is a particularly lovely day for you just the same.
Posted by Lisa Laree at 5:44 PM 1 comment:

It's really sad that I'm only managing the choir posts at the moment; as I've lamented on Facebook, I seem to be more behind on my Christmas prep than I've ever been...and I'm not even involved in any big projects this year. At least the Choir posts are keeping me from totally neglecting the blog... ;-)

Anyway, December's colors are black, silver gray and red.  So this is the Lee bootcut jeans with the saved-from-disaster Vogue 7604 rayon blend sleeveless blouse under a Lands' End boiled wool jacket that I received for Christmas in ...I think...1996.

That jacket sat in my closet for the longest time; I loved it and wore it now and then but it was way too wide on my shoulders.  Finally a few years back I got brave and opened the top part of the armscye seams and moved the sleeve caps up into the jacket about 3/4".  I could get away with that as there was a pinch of ease in the sleeve, which I eliminated, and boiled wool stretches a bit so I could kind of manipulate it into the new armsceye.  Anyway, the jacket is now making more regular appearances ;-)
Posted by Lisa Laree at 4:29 PM No comments:

But I was chaperoning a school trip and got back abut 12:45 AM Sunday, was at church from 8 AM to 1 PM, came home and fixed lunch (salad and shrimp from the deli and some leftovers...) then went to a Christmas party, so, well, it's been a busy weekend.

Somewhere in there I threw the camera at My Sweet Baboo and got him to take a photo.  (Note to self: do not stand in front of the sofa for choir photos. It totally absorbs the blue jeans.)

Anyway, December's colors are red, silver/gray and/or black w/jeans.  The jacket is Robin's Jacket from Silhouette Patterns, crafted in a sparkly holiday red wool/silver Lurex plaid and trimmed w/faux suede.  It's one of my favorites for this time of year; you may see it again before the month is up.

I'm wearing it over a black microfiber charmeuse Pam's Blouse, also a Silhouettes Pattern.  I have an on/off relationship with that blouse; somedays I put it on and love it, other days I can't get it to drape right.  And it's polyester, microfiber notwithstanding.  I need to make one out of black silk, and make a couple of changes to the pattern to reflect the fact that I'm not quite the same shape I was when I made this almost 7 years ago... The weird looking wrinkles in the front are actually pleats that just didn't photograph well.  It really looks better under a buttoned jacket, but, well, the jacket doesn't look quite as good snapped up as it might've looked a few pounds back so I just decided to embrace my frumpiness and go. ;-)

I am wearing it all with the CWC knit jeans, which just happen to be almost the same color as my sofa.

But I have been hit w/inspiration for another variation on that Jalie draped-front cardigan...stay tuned and see if I get it put together or not.
Posted by Lisa Laree at 8:37 PM No comments: