It's been too long since I managed to get a post up over here; fortunately, the 'Random' in the name means I don't have to stick strictly to sewing...

Which is a good thing. The only thing I've made since the last post are more face masks.  I even took down the 'year to date' stats because I'd so lost track of what I bought and what I sewed for the masks that it wasn't even funny.  I'm just going to start clean next year.

When we first moved to The Rocket City back in 1980, I was shocked at how few houses had Christmas lights up.  Christmas lights were a THING in central Indiana, where I grew up, and  it just seemed so bleak to be in a city that had so few.  I remember getting excited driving through Indianapolis on our way to the farm at Christmas in the early 80's and seeing so many houses with lights.  There was even a farmer near my folks who put a Christmas star on his grain auger system every year.

Fortunately, over the years, lights have become more common in our corner of the South.

Ten years or so after we moved down, we began a semi-regular tradition and sometime in December, we would load the kids into the minivan, put a cassette tape (remember those?) of Christmas music in and go driving around town, looking for Christmas lights.  We would usually find some, but it still was not the level I remembered as a kid back in the Hoosier state.

We're finally just about there, lol.

Tonight was a warm night, so My Sweet Babboo, the Flute Player and I went for an evening stroll in the neighborhood.  We walked about three and a half miles and saw lights on pretty much every block.

We commented on the different styles and kinds of lights and how different folks used them. 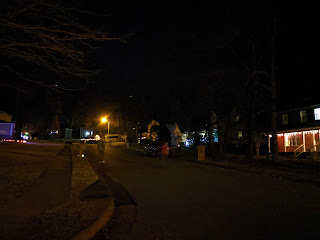 But, all in all, it only took about an hour and a half. 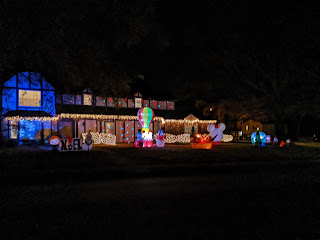 About what we used to spend driving around town when the kids were small. 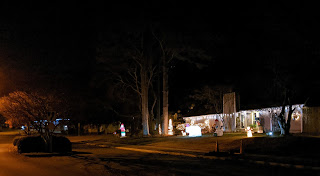 We did observe several cars that appeared to be...driving around looking at lights. 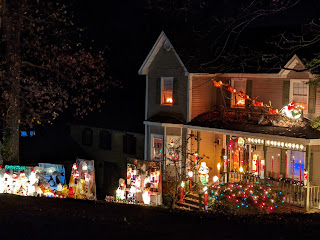 At one point, some folks in a golf cart all lit up with Christmas lights went by us a couple of times.

I took a picture, but the light was bad and it didn't turn out. 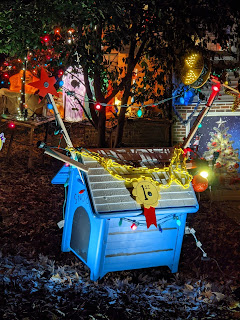 There were about four folks in the golf cart, just buzzing around the neighborhood.  What a hoot! 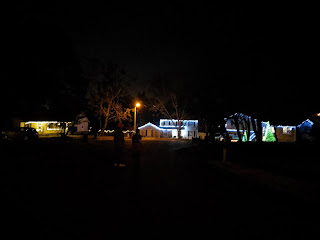 I confess, it would make going up the hills a lot easier... 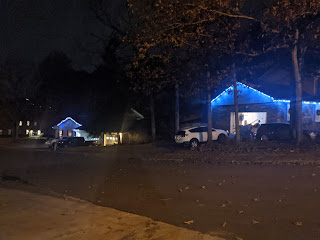 But all in all, I think I prefer walking around for 90 minutes to driving. 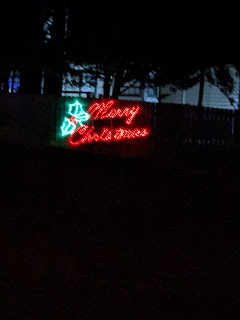 I didn't take a picture of our house tonight, but here's one from a pre-dawn walk a couple of weeks ago.  Not as fancy as some we saw tonight, but it works for us. 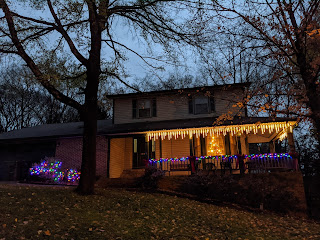 Walking the neighborhood was a quite safe, socially distant activity and it was a perfect night to do it.

I hope you can find safe, socially distant ways to celebrate the season! It's going to be different, but, you know, every Christmas I wonder how we could back off from the crazy a bit and just have a simple, heartfelt celebration.  Looks like we will be able to do that this year....and, maybe next year we will have turned the corner on this thing and we will be able to enjoy all the usual traditions.  Or maybe we will have learned which ones are truly important and which ones are just...busyness.