Being as we'll be absent from choir next week, this is the last choir wardrobe post for 2014.  Seems kinda hard to believe...this year has gone by so fast.  Almost scary fast....

But today was the uber festive day; we arranged the choir around a large fresh cut fir tree that smelled SO GOOD...took me back to the days of my childhood, when that sharp scent was a true harbinger of Christmas.  I managed to stand next to the tree, just so I could inhale. ;-)

Sigh...today's ensemble was all stuff that fit way better ten pounds ago, but, well, I kept moving so it really didn't matter. ;-).

Silhouette Pattern's Robin's Jacket, made from a wool/lurex blend that I got from Nancy Erickson several years ago and made up almost immediately (relatively speaking; it got made in the same calendar year I bought it...) specifically to wear for choir in December.

I have on a black rayon/lycra turtleneck and, I'll be honest...I can't for the life of me remember what pattern I used on it.  It's probably at least 5 years old...As are the black wool Oxford Pants.  Column dressing at its best.

And, while I had on the nice black column, I thought I'd get a quick photo of the latest project:  the cut-and-wear vest.

When we last left our heroine, she was trying to decide the best way to discourage the knit from following its natural tendencies and curling like the tail of a whipped puppy.  Ultimately, I rolled the fuzzy borders to the outside and handstitched them down.  That helped stabilize the edge a bit...didn't do the trick entirely, but it did help.  I also ended up doing the same thing to the armholes; I tried it on w/just the raw edges and, not only did it look unfinished, but the cut edges wanted to spread.  Not good.  So I also rolled and stitched the armholes.

The Flute Player, home from the internship for the holiday break, asked me what I was making.

I replied that it would either be a funky fuzzy vest or something that looked like cave man attire.

One good thing about the end of the year...everyone seems to be a little more willing to be photographed.  It's sort of expected that there will be Family Pictures Taken.


The first picture was taken on Thanksgiving Day, after the pecan pie evaporated.  It's hard to believe those sweet kids have grown up into these awesome adult people....or that it happened so incredibly fast...

Picture two was the Christmas Letter Photo... these are the ones who are still at home.

The holiday season is a great time of year, if for no other reason than I  get to hang out with these folks a little more than usual. 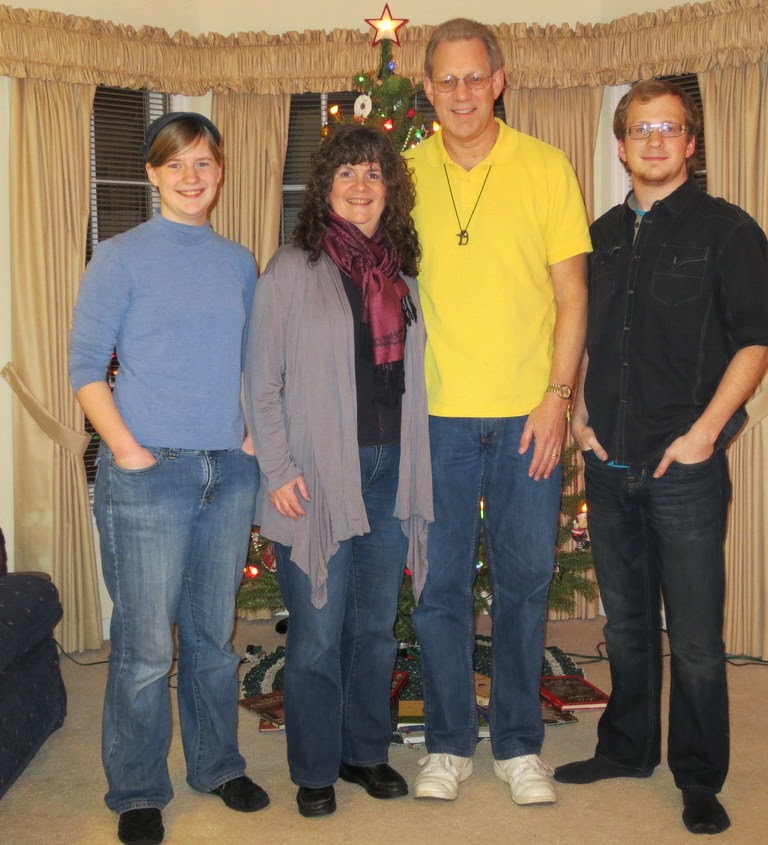 I admit.  The pants are a repeat from last  week, the never-yet reviewed Jalie Classic Women's Trousers, in that perfect for the month red/gray pinstripe on black.  Coldwater Creek boat  neck sweater shell and my TNT Jalie Pleated Cardigan, with a drapey modification to the back.

Trying really, really hard to curtail my purchases.  Not only am I becoming more and more reluctant to add to the fabric stash, but, well, the financial future is a little iffy, although My Sweet Babboo has some very solid job leads developing and we're hopeful that he'll transition to another company in the area.  But, well, temptation crossed my path and I succumbed.

I came across an interesting piece of fabric at Fabric Mart...at first glance, it wasn't much, but they had a picture of it on one of their employees and I thought, 'Now, THAT'S different...' 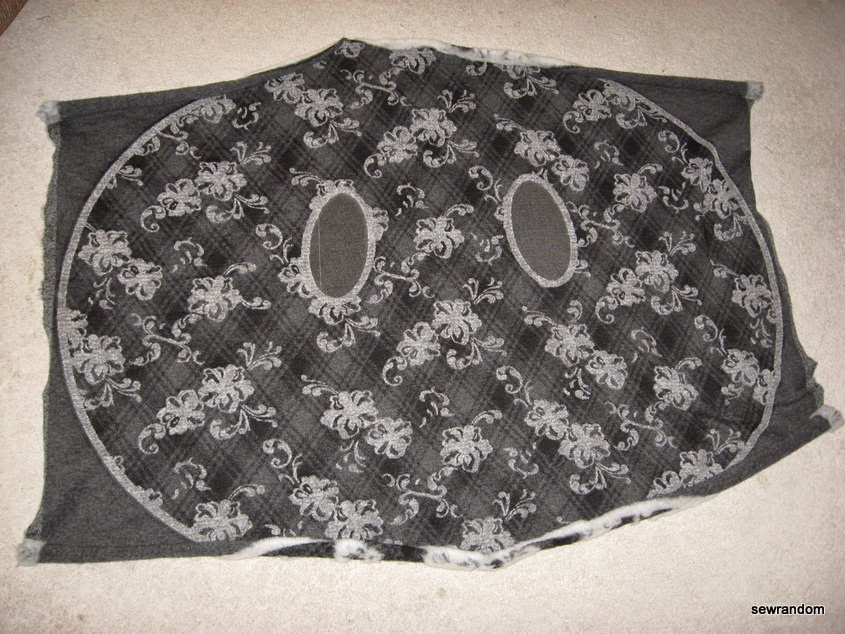 It was sold by the panel...knitted wool blend.  It's way fuzzier on the reverse side than I expected, almost fleec-y.  And there must not have been much of a margin between the panels, I'm not sure it isn't cut just slightly into the circle on one side.

But ....according to the website, all you  have to do is cut around the border on the outer edge and the inner holes and, bingo, it's a vest with a drapey collar!

But, looking at how the panel is curling, I think it's going to take a bit of effort to deter that. 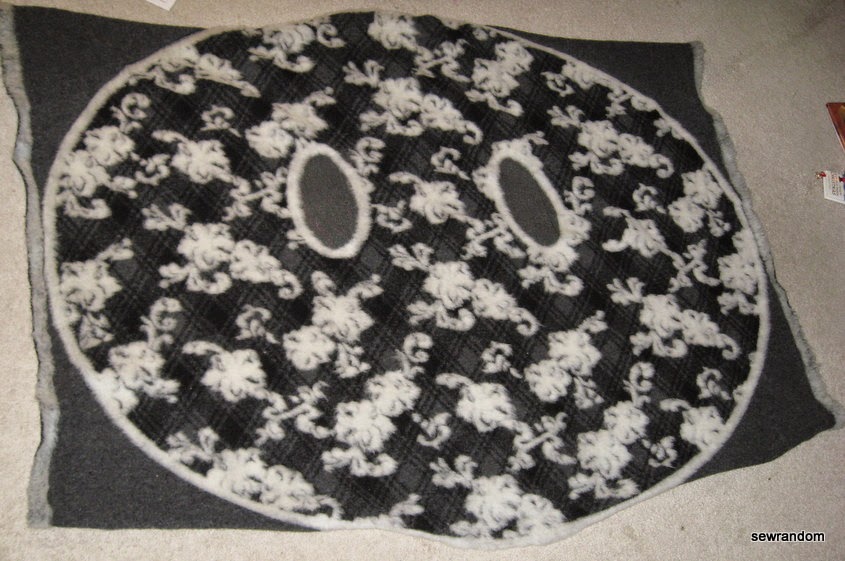 I'm thinking I'll fold the fleecy band to the other side and hand stitch it down.  That should deter the curling on the outer edge; I might not need to do that for the arm holes.

It will be very warm and funky...

And, while I was there, I also snagged a piece of cotton/lycra t-shirt jersey with a cool blue/white marbled print.  Been wanting some cozy long sleeved t shirts...that will be great.

But this *should* be the last fabric in of the year.

I got me a couple of new red shirts!

They are not perfect.  That's a post for another day.

But they are as good as RTW and they are DONE and IN THE CLOSET.

And I wore one today, since December's choir wardrobe is the very seasonally appropriate Black, Gray and Red. 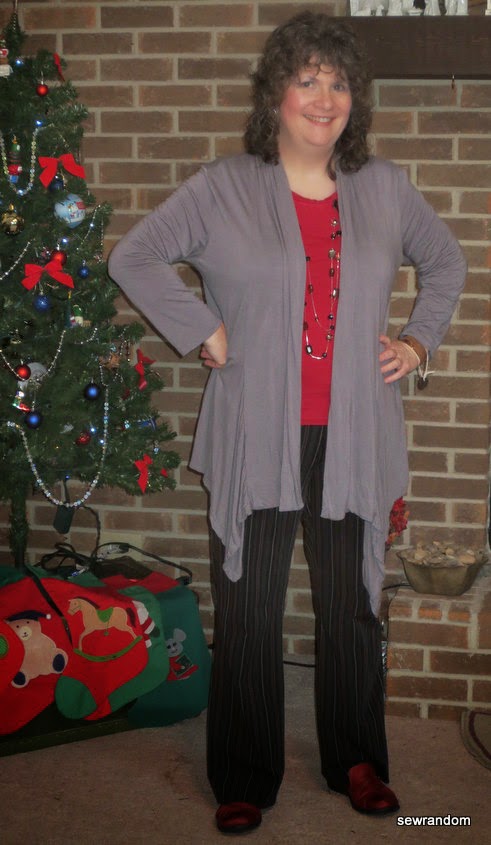 Jalie 2566,  which I GOTTA write a T-shirt review for on of these days, kinda frankenpatterned  up because there is no long-sleeved T version in the envelope, made in a yummy warm and comfy bamboo jersey that's been in the stash a while, Ann's Cardigan from Sewing Workshop and the first out-of-the-envelope go of Jalie's classic boot cut pants, to which I added pockets that were about twice as deep as necessary, so that my keys are nearly banging the top of my kneecap. They're made of a poly/lycra suiting that came from the dollar table at Wal-Mart, back when the dollar table at Wal-mart actually had useable fabric on it.  I really don't like the fabric..it feels cold and heavy...but I LOVE the colors with the red and white pinstripes on black, so I keep wearing them...and I have never reviewed that pattern, either, since I haven't got it tweaked for perfection.

Not doin' jeans if I can help it this month...it is the Christmas season, after all.

And...red shoes, which should make me happy, but my photographer failed to indicate that I had one pants leg hung up on the shoe.

I posted a rhyme on facebook, and then thought, what the heck, I'll put it up here, too.

Inspiration that hit as I was pulling our our polyglot assortment of Christmas ornaments to hang on the tree this year.  I thought it might be kinda fun to see if anyone who hung out at the house would actually try to find all the stuff; I might even procure a small prize.  Sort of like the Pickle Game, taken to another level.

I admit I bobbled the rhyme/meter just a bit in the verse about the angels.  But the rest fits my memory of those 'I Spy' books my kids had.

I challenged my facebook friends to write a similar rhyme about their tree.  But after a few days, I began to realize there may not be much response there...as I looked through the photos of my friends' Christmas trees, I realized mine is rather old-fashioned and out of date.  I mean, who puts lights and random ornaments on a tree anymore?  The standard seems to be a few sets of color-coordinated ornaments, net and ribbon, with a pouffy bow or floral arrangement or something at the top.

Something like this: (courtesy of Better Homes and Gardens)

Not much to I SPY on any of those.  But the old fashioned tree at our house...yeah, there's some I SPY possibilities there... 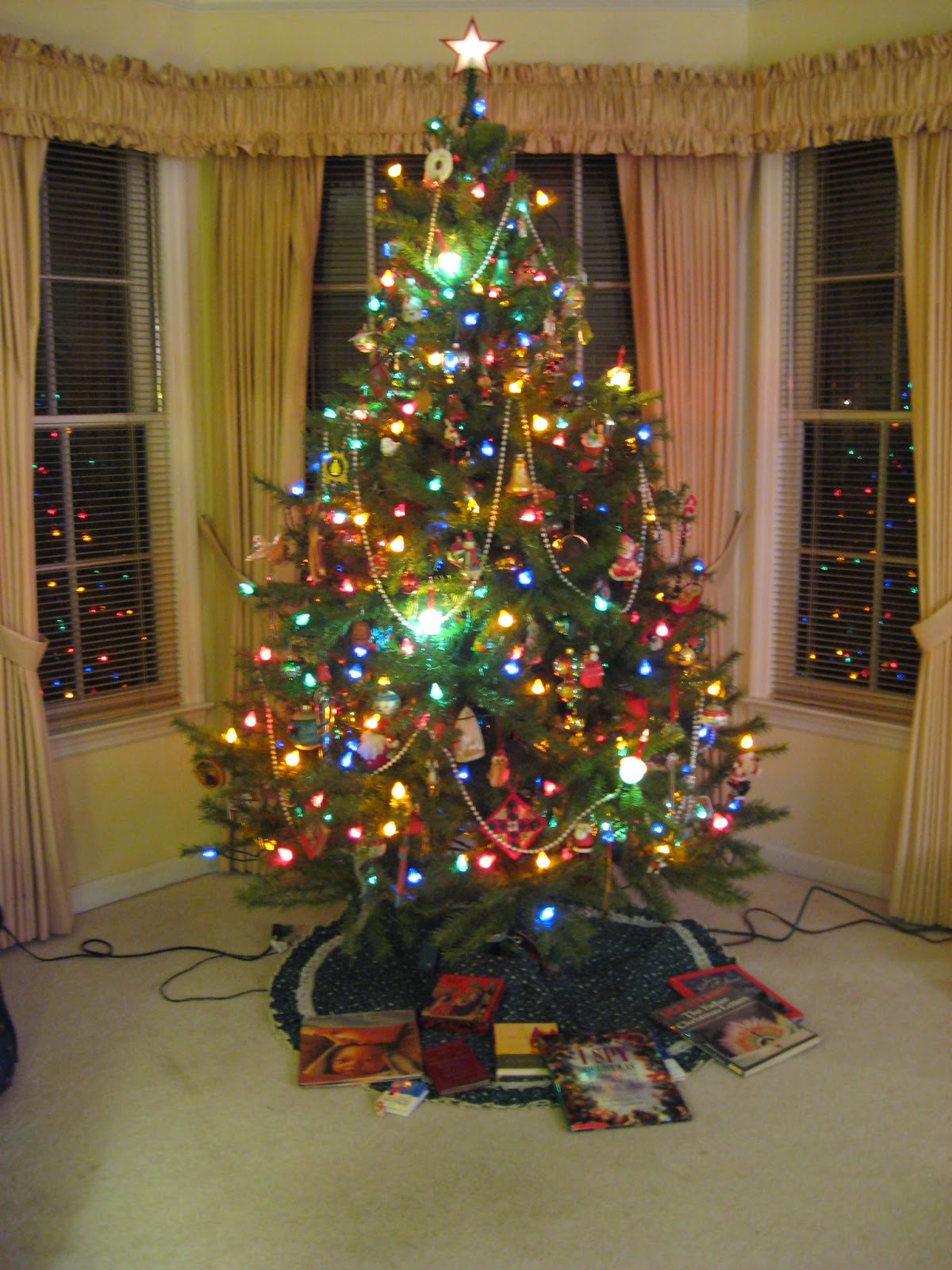 So what kind of tree is at your house?  BH&G beauty, or kitschy old fashionedness?

A horse pulling a sleigh, a swirly sea shell
A World War One Ace (twice!) and a green striped bell
Three young carolers and their shadow
The State of Indiana and Three bells in a row

Three horses that rock, Chuck and the Gang
Two street cars and A Ford Mustang
A sewing basket, a box with thread
A tree in a thimble and a quilt edged with red.

A cat with a hat and a red hair bow,
A dulcimer and a barn with silo
A tree full of candy from 2009
A bristly rabbit and a duck made from pine

An angel in a rosy dress,
One with golden wings
A crystal angel with a tree
And one with a book to sing

A mouse in a nutshell, two birds in a nest
Two tiny sheep under a star to rest
Wise men on camels, a pair of mittens
A butcher shop and two mischievous kittens

Two lamp posts and a red front door
A doll named Ann and a Santa by Shore
A holly necklace on a dove
A round-headed kid with a tree that needs love.

Ice skates on Santa and on a Snowman, too
A red-striped shirt and a shirt that is blue.
I’ve found all this and more on our Christmas tree
How many of these things can you also see?

It's the same dress as yesterday! :-)

The infinity scarf was a random purchase, just because I loved the colors in it.

I wondered if anyone at work would notice that it was the same dress, but I don't think anyone did.  But then, I'm not sure the folks in the office really even saw me at church yesterday, so I guess it was a long shot anyway.