The first sewing publication I subscribed to was Sew News, back in the 80's, when it was a large format, newsprint deal.  Before long, I had discovered and subscribed to the Sewing Update Newsletter, the Serger Update Newsletter (anybody remember those?  I still have mine in binders...) and the creme-de-la-creme of sewing publications, Threads Magazine.  My first copy was issue number 37, from October 1991.

The Update Newsletters eventually closed down; I don't remember if I subscribed to the end or just until I decided I had to pick amongst the subscriptions.  Sew News changed formats...and dumbed down its content to the point that it was like reading a women's magazine that had crafty discussions.  I didn't save those, but I do have a folder full of articles that I cut out of them. I gave it another go a few years back when I won a subscription in an online contest, but I was disappointed to see it no longer was a monthly publication.  And, while the content had improved somewhat...it still seemed more basic than creative and it didn't really seem worth the expense.

But Threads has rolled on and on.  Not too long after I subscribed, (maybe a year?) they altered their focus a bit from all-things-fiberly to strictly sewing.  I missed the interesting articles on making buttons from polymer clay and felting wool into hats, but since I wasn't likely to really use that (although I do have some aging Fimo somewhere...) it wasn't tragic.

But today I got this in the mail: 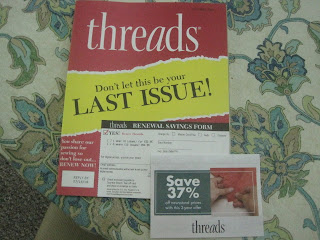 I haven't renewed yet.  I'm dithering.

The content has dropped over the years; those first issues were over 100 pages; this potentially last one has 82.  The quality of info has kind of vacillated; it's better now than it has been.  The decline in the printed product is a reflection of the times more than anything else, I think.  I mean, we haven't had a daily newspaper in these parts in years...it's all online.

And, to be honest, that's my biggest beef.  I'm a print subscriber, but I have to fork over more dough if I want to see the online content they call 'Insider'.  Maybe it's just me wishing for a perfect world, but it seems to me that the print subscribers should have access to the online content.  I don't even click most Threads links I see on social media anymore...what's the point if it's likely to be 'Insider only'?

And...then there's the fact that I'm simply not sewing as much.  It just doesn't seem justifiable to keep up the subscription so I can flip through it, smile at the end page story and put it on the shelf.

Maybe 27 years' worth (that's 162 magazines, all stashed in custom slipcovers) is enough.  Maybe.

Or maybe I'll put a check in the  mail next week...lol.  Can I really pull that plug?  Do I really want to?  Do I have good reasons not to? 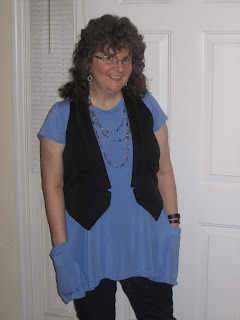 This is just a fun top.  It's swingy and comfy and I may make more.  Maybe with cap sleeves, maybe with the ones in the actual envelope.

I need to find some largish scraps that kinda sorta go together and do the color blocking shown on the envelope.

Because I can always use more fun tops.
Posted by Lisa Laree at 9:49 PM 3 comments:

I'm slowly sewing through the fabric in...next up was the medium blue bamboo/lycra jersey.  Since the decision came down that we were not going to change our colors for June, I had a little more time to get the blue in use.

I bought 2 1/2 yards, with the intention of making a Pamela's Patterns Cool cardi and a shell top.  But, try as I might, I was about 4" short of having enough fabric for both the cardi and the top.  I didn't re-measure the fabric after I pre-washed it but I really think it shrank up a good bit, just based on how much I had hanging off the end of the cutting table.

But whatever.  The fabric feels great on...but the serger didn't like sewing it.  I had LOTS of skipped stiches, and it kinda fed through unevenly.

I am seriously thinking about taking the serger in for a check up.

But, I just did a narrow zig-zag on the serging to catch the missed stitches so, it's ugly on the inside, but I won't tell.

Anyway, I ended up making another Butterick 5925 ... the Katherine Tilton tunic-y T top w/ pocket gores in the sideseams.  Only I borrowed a cap sleeve from another pattern ...summer and all.  And I cut my own neckband, just because I don't care for the floppy neckbands the Tiltons seem to love on their knit tops.  To each her own...

The hanger shot is pretty boring, but it's very comfy.  Ugly seams and all. 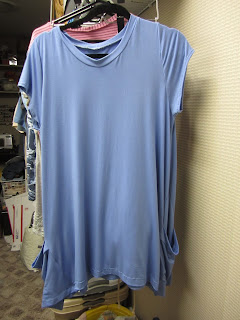 Maybe a photo of it on tomorrow....

I need to find the scraps from the light blue top and see if I can patchwork up a little top from the leftovers.  I'm SURE I kept them...even though there wasn't much.  I'm just NOT sure what I did with them, lol.

In other news, Number Two Son, AKA The Actor,  has found himself an apartment in Jacksonville, Fl, so My Sweet Babboo and I will be heading south with a vanload of his stuff shortly.  I haven't been to Florida since...2004?  Probably going to go a little more frequently now.  He seems to be doing well in his job.  They did their summer day camp event last week, which seems to have been a success.  Their children's ministry is very similar to ours, so he's fitting right in.

Lotsa road trips on the docket for this summer, as well as the final push to the remodeled-gym-turned-sanctuary.  Official first service is August 5.