Have you ever held a garment that *must* be manipulated in some fashion in your hand and prayed for guidance? I did yesterday. The vest that needed alteration was made from black mesh knit; my intention was to carefully slit the trim at the bottom, open up the side seams and insert a godet.

But I discovered that the seamstress who had made the vest had used the dreaded 'stretch' stitch (y'know...the one that goes two stitches forward and one stitch back?) on the side seams. There was no picking it out. I tried for 20 minutes and managed to get an opening about 1/4" long. I couldn't see the thread, I was afraid to make holes in the fragile knit, and I only had until about 5 PM yesterday to get the whole deal finished. It Obviously Wasn't Going To Work. So I prayed.

And I ended up using some fusible bias strip interfacing to stabilize the seam and cutting it open. Then I saw how silly it was to fuse that stuff on the pressed open seam...that meant it was fused to the seam allowances, which were cut off in the process of cutting up the seam line through that nasty triple stitch. So I had lots of bits of fused seam allowance strips dangling from the opened seam. Well, it made me feel better to stabilize it.

So, no seam allowance meant I really couldn't insert the godet as planned. What to do, what to do...

Steam A Seam to the rescue again! I put the SAS on the wrong side of the godet, then carefully overlapped the vest RS down and fused it. Then I just zig-zag topstitched the whole business, going from bottom to top on both sides. That worked.

But it still wasn't enough flare; I'd made an extra godet 'just in case', so I sweated out finding the vertical center back, added the bias fusible strip on that line and carefully cut up it and repeated the process.

Then I made a little 'fleurchon' (fabric yo-yo)from the remnants of the velvet and added some dangly strips to it and pinned it to the top of the triangle to kind of mask the top edge. 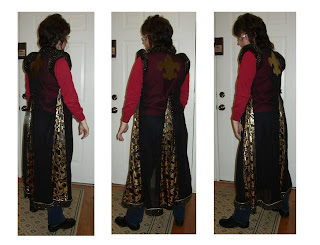 The young lady who wears this vest is a teeniny little thing; obviously, I'm not! But you can kind of see how it worked. I had to just drop it off at school when I took The Actor for dress rehearsal last night so I could go to choir practice, but when I got back to school after choir I heard that the vest was a hit with the directors. Whew.

The lame' blouses, on the other hand, had issues. First, the facing wants to flip out (probably because the stiff fabric was interfaced...but, as ravelly as it is, I didn't dare not interface it). Some Stitch Witchery is to be applied today after the morning middle school performance to see if that will hold it down sufficiently; if not, then I guess we'll spend tomorrow topstitching them all down around the outer edges. But the big problem is that the directors believe the sleeves are too big and blousy and detract from the rest costume and They. Want. Them. Shortened. To a shoulder-roll deal. Next to the jacket shoulder-roll...???

Now, I sat in the theater a little last night and watched a bit of the show and, in my as-unbiased-as-I-can-manage opinion, the shirts looked luscious and fabulous. I'm really not seeing that they detract from the gorgeous jackets. But, it's not my show so I guess we'll do what the directors say. But I strongly encouraged the ladies to pin those sleeves up on someone after the show this morning and parade them across the stage to make *sure* that's what is wanted. 'Cause once they cut 'em, there's no going back.... Not to mention the show opens tonight.

Sleeve issues aside, I was really impressed w/how the show looked on stage. And the talent level of these kids is amazing. If you like theater, and you live anywhere around the Rocket City, try to catch a show.

But for me, I'm home all day today being cook and general lackey for DS. And maybe doing some budget, laundry, dishes...dare I say personal sewing...while I'm hanging around.
Posted by Lisa Laree at 8:23 AM