September colors are black, white and gold, so I went with Black and White and gold earrings/necklace.

But it's all old stuff...the most recent edition to the wardrobe is the black ponte McCall's 6844 cardigan, which I made for SWAP last year.  The striped sleeveless/cowl-less Loes Hinse Cowl top and the modified black stretch twill La Fred Daphne pants have both been in the closet for years and years.

And the glasses are still tinted because I'd just come into the house.  It was a busy day; we were only home about 30 minutes to eat and then back out the door again.

Still haven't heard what colors we're going to wear for October...hopefully it's something already in the closet because I'm not going to have time to get anything made this week....

Posted by Lisa Laree at 11:22 PM No comments: Links to this post


I have pictures of the process for one shirt...but I haven't taken any 'finished' photos yet.  The second shirt...I only have a 'finished' photo, no 'in process'.  So maybe it averages out? LOL.

We saw the eclipse at Fall Creek Falls State Park in Tennessee last month and, of course, I had to get a T shirt.  And of course, I wanted a purple one...and they were nearly gone.  I got a 2XL, with the intention of cutting it down. 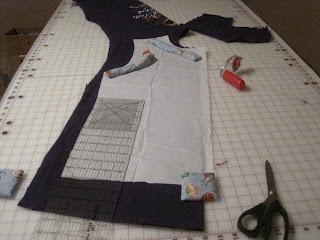 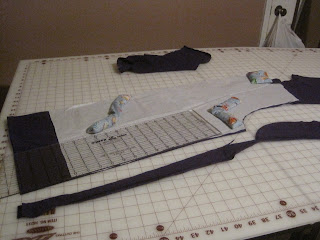 I used a boxy Kwik Sew T-Shirt pattern, and cut it down to size. I left the length; I'd like to be able to wear it w/ leggings so the extra length is a bonus.  I removed the sleeves, cut up the side seams, folded the shirt in half (still connected at the shoulders) and laid the pattern over it, overlapping the shoulder seams and just cutting straight down through the hem.  The sleeves are a little shorter; I put the peak of the sleeve cap on the peak of the (stacked) sleeves and let the pattern hang off below the hem. 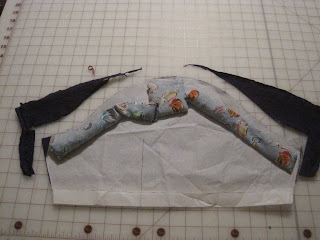 Sewing was just a matter of putting on the sleeves, serging up the sides and tucking in the thread tales.  Haven't had an occasion to wear it yet... 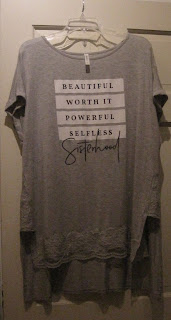 For the Sisterhood shirt...well, it was one of the shirts that was in the product area for our recent women's conference.  Sort of.  When the shirts came in, there were a couple that had seams that had slipped when sewn and the fabric hadn't caught.  So I brought them home, unpicked the bit of seam and then serged it back up.  I bought one of them...so I had it early enough to wear it to the first night (one of the perks of being willing to fix things...).  But it looked like a nightgown, I thought, and the slits on the side were high enough that I had to wear a cami under it.

So, after the conference, I ordered some gray corded lace yardage, which arrived earlier this week, and played with it a bit.  I shortened the front 5" to get some hi-lo going on and hopefully making it look a little less nightgown-ish, then put the lace on to edge the bottom.  I zigzagged around the motifs and trimmed away about 1/2" of the t-shirt underneath around the curvy line of zig-zagging.

Good practice for when/if I decide to try some Alabama Chanin techniques...lol.

Then I put a bit of the lace on the strip that I'd trimmed away and zig-zagged it down, then put triangles at the top of the slit, to, um, cover them a bit.  That lace is laid right on the hemline and is not trimmed away.   I zigged-zagged along the edge of the hemmed slits, then again along the hem stitching line.

And discovered that it looked slightly askew when I put it on.  Took it off and compared and...one of the slits started about half an inch higher than the other one.  Silly me, not to have checked that.  But, as my mother would say, no one will see it on a galloping horse; you really have to look closely.  I'm just going to call it a quirk of the shirt (after all, I got it because it was defective anyway) and have fun wearing it.

An aside...I looked at it and thought it looked a bit familiar.  I pulled out my Sewing Workshop Eureka Top pattern and laid it over the Sisterhood shirt and...lo, and behold, it matched up perfectly, allowing for the fact that this is tunic-length and the Eureka is a high-hip crop top.  So now I have some ideas for the Eureka shirt...lol...

The Blingy Jacket and the Urgent Project

September's Choir Wardrobe colors are Black, White and Gold; I decided I might as well put that blingy McCall's 6844 jacket to work...the one made out of the foil-printed scuba knit...with my black modal/rayon knit Jalie 2682  and (faded) black RTW jeans.  It's at least the 2nd...and maybe the 3rd...time I've worn the jacket for choir but for some reason I got a boatload of comments on it this time.  It is attention-getting, that's for sure.  It's also kinda hot.  But, hey, it's polyester.

Spent most of the evening working on some prototypes for a sudden church decor need.  Our women's study groups have decided to use a quilt theme this year...or at least this semester...and they need some appropriate table toppers.  Another church group was supposed to make them, but, well, sometimes life happens and suddenly the studies are about to kick off and...no toppers.  We need 30 for all campuses. 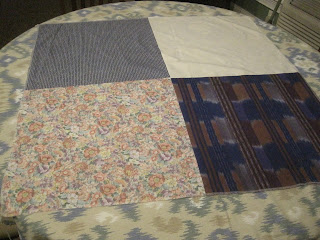 So I've gotten pulled into the project, and sent an SOS out to the church sewing volunteers.  The original plan was to just use fat quarters sewn together and serged but, well, we're using donated remnants and I'm not sure we're going to have big enough pieces.  I dug into my scrap box (been a LONG time since I did that) and pulled out several pieces.  The bigger ones I cut into 18 1/2" x 18 1/2" squares (included 1/4" seam allowances), smaller ones I cut into 9 1/2" x 9 1/2"  squares and the pieces that weren't 9 1/2" long  on all sides I cut into 6 1/2" squares.   Then I started serging them together. 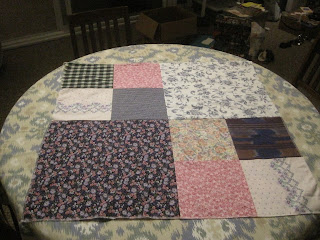 They wanted them left unfinished, so they could, in theory, be sewn up into a quilt later.  I did serge the edges, so they wouldn't fall apart, but I left the tails at the corners.  I kinda like that look.

It was interesting; some of the scraps brought back sweet memories of the garments I made; a few I looked at and thought, 'What did I use this for?'

I really only pulled out the larger chunks; I've got a lot more smaller pieces that I could even cut into  smaller squares to nest a nine patch in a 4 patch square or even in the nine-patch square. 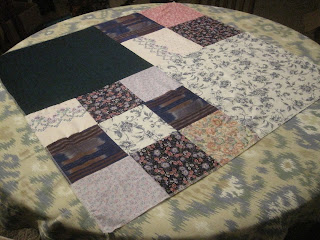 It's pretty obvious the largest part of the task will be cutting the fabric to size.  It goes together pretty quickly...so long as I don't sew the wrong sides together.  Or end up with matching fabric side-by-side....I could've finished considerably sooner had I not repeated those mistakes in my haste.

Three out of thirty down...unless the word is that they don't want the pieced interior blocks.   Or we may use those as backup, in case we just don't get enough half yard remnants.


ETA...after posting the pictures, I discovered that we had a communication breakdown; the finished toppers were to be eighteen inches square.  So I will be disasembling the toppers and  finishing off the 4-patch and 9-patch blocks. Which means I have 4 done instead of 3 and the total amount of work we need to do has just dropped by 75%.  So I think this is going to be a simple quick sew after all.
Posted by Lisa Laree at 10:15 PM No comments: Links to this post

Stuff I made: The vest (Burda Magazine May 2009) and white-pinstripe on black pants (modified Loes Hinse Oxfords). Both of which are in the starting lineup for the Choir Wardrobe. For what it's worth, I kinda sorta made the necklace too...that is, I added a chain to the floral bit,which came all in one piece from Hobby Lobby.

The stuff I bought would be the white cami and the metallic gold linen knitT... which I thought was rather overpriced when I bought it a couple of years ago, but I needed gold something and couldn't find fabric.  Which is a pity; had I made it, I would have made the neckline wearable w/o an underlayer and made it bit longer.  And cut it on the grain.

In other news, I got a new toy a couple of weeks ago and inaugurated it tonight with a double batch of chocolate chip cookies: 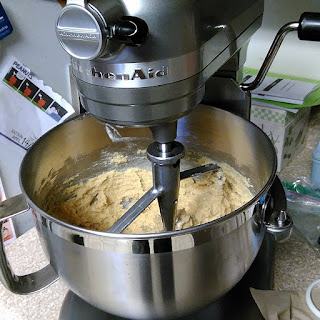 I had Christmas gift money and Birthday gift money and Costco put it on sale.   Gonna be a paradigm shift; my mom has never had a stand mixer so it's not part of my cooking habit.  But it made short work of the cookies tonight, which would have had my hand mixer smoking.

I planned to take them to work to share tomorrow, but apparently Irma is going to come our way tomorrow and the Governor declared a state of emergency.  So schools closed, which  means our office has closed.  Which probably means we won't get more than a bit windy rain.

But we have a boatload of fresh cookies, so I think we'll do fine.

Made a grocery stop on the way home from church this afternoon; the kids requested burgers for the Labor Day grill out instead of the pork chops that I'd planned to defrost.  So we needed some hamburger.

Just as we were getting into the checkout line:

I turned around to see a lady who was probably five-ish years older than me.

'Where did you buy your pants?  I've been looking and looking for pants that color and I can't find them.' 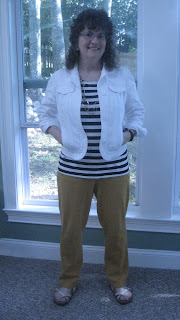 'You got it online?'


September colors...black, white and gold.  I intended to wear my black jeans, but discovered they were still crumpled in the suitcase.  Sigh.

At least the gold doubleknit Sewing Workshop Helix pants were clean.  And I'll be honest...I never ever expected to be stopped for a compliment on them.  And I realize it wasn't the pants, but the color of them, which is even more ironic as I like everything about them EXCEPT the color.  But it serves when gold/mustard is required.

The striped top is a sleeveless/cowless Loes Hinse Cowl top, actually made from a remnant.  The armholes aren't really suitable for sleeveless but so long as I keep a topper over it (RTW white denim jacket today) it looks just fine.

And next time I'll check the light settings on the camera before I hand it over to my photographer.  :-)
Posted by Lisa Laree at 4:42 PM 3 comments: Links to this post