Some time ago, I posted somewhere about my frustration with my serger.  I thought it was on the blog, but a crawl through the last couple of years of posts didn't turn up anything, so I either posted it somewhere else...like Stitcher's Guild...or it was longer ago than I thought (more likely).

I had gotten it seriously serviced back in early 2014.  It had some dull knives, which were replaced, a dinged up throat plate, which was also replaced, and I think one of the loopers was slightly bent.

It purred when I got home with it.  But on of the first projects I sewed was my Epic Trench Coat...and some of the seams that I ran through the serger were really bulky.  I remember that there were some klunky noises coming from it as it labored through those seams and...something happened and it never quite ran perfectly after that.  I should have taken it back to the local repair guy, but, you  know, it wasn't awful and I just kept sewing....

Time passed and it got to the point that the knives were chewing the fabric...especially knits. It looked like lint/thread was getting down between the upper knife and the housing and pushing it slightly out so that the knives weren't aligning right and when I cleaned it all out it perked up and was running ok...or at least tolerable...again. But the problem kept recurring; I had to keep stopping to clean it out.  Cut threads would even just bypass the knife and get sewn into the seam, which caused all kinds of weird things. I wondered if the knife wasn't properly set, or if it had gotten knocked loose or some such thing, because I'd never had that problem before.

But recently it was getting bad again, and cleaning out the knife didn't seem to make a big difference.  I mean, the seams were dragging going through, which was distorting them and making for ugly sewing.  I realized that the problem was actually cutting into my enjoyment of sewing, even though it wasn't cutting fabric well.  My productivity ground to a halt.

Then a week or so ago, I serged the head off a pin that had been buried in the gathered middle-of-three layers I was serging on a Hot Patterns Fast and Fabulous Lastrada T.  I was sewing very slowy, because it wasn't cutting at all well anyway, and didn't even realize that's what I'd hit until I found the headless pin in the gathers.  That pushed it over the edge.  I tried some sewing the next day (Saturday the 13th) but it was horrible.   My local sewing repair guy retired a couple of years ago, and the nearest reputable repair folks are an hour and a halfish away.  Getting my serger repaired was going to be a serious undertaking.  Late in the afternoon, I finally commented to my Sweet Babbo that the serger needed to go into the shop.  I even admitted to the possibility of getting another one...this one is over 30 years old.  'Then I would have a backup,' I said, as I headed to the computer and logged in to check the weather.

I didn't even mean to click on Facebook, but for some reason I did.  Lo and behold, a friend who lives in the same hour-and-a-half distant town had posted a serger for sale.  Reconditioned, from the same reputable folks that I need to take my limping one to.  She'd just not used it as much as she thought she would.

She posted it exactly seven minutes before I logged on.

Y'all, that's what I call Providential timing. My Sweet Babbo agreed so I messaged her immediately and got the machine today when they came to town for an appointment. 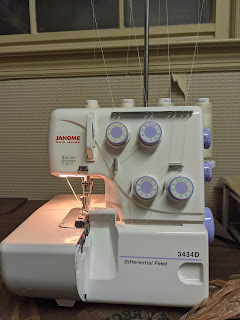 It doesn't fit the serger table I  have (I can't pull the extension up; see the tiled background photos for how my old serger snuggled up in there),  I'm going to have to get used to the noise of the differential feed (my old faithful was branded New Home...and it was the last generation before DF was standard.  I *could* have gotten DF in 1989...for an extra hundred bucks...).  Got it scooted right to the edge so I can have a thread catcher bag hanging off the table but...IT SEWS.  It'll definitely do for a backup.

Now I just have to find the time to drive Old Faithful to the west side of the state to get her restored... and make me some time to sew some stuff for the closet!
Posted by Lisa Laree at 10:08 PM No comments:

Time for some 'Random'....A Stream-of-Conciousness Ramble...

I have struggled with this for days.  Y'all know that I try to keep the blogs pretty much free from anything that smacks of politics or opinions...I steer clear of most current affairs. I want this to be a safe, kinda fun place.

I have found myself alienated by people who hop on a bandwagon and proclaim loudly against beliefs I hold dear...because they are coming down hard on an extreme representation of it but don't realize that their vitriol isn't tempered enough not to hit folks who hold a similar, but not identical, viewpoint.  Painting with a very wide brush, they pretty much slap it on any one who doesn't follow their line of thinking.  And I have been slapped with that brush by folks on both sides of the spectrum, so no one has the high ground there.  In short, I have repeatedly been sorely disappointed by folks I thought well of...and I don't want to be guilty of the same sort of thing.  So I keep my opinions off the internet as much as possible.

But sometimes...a radical departure from the norm is all that will suit.  There was the day I walked out of a church service...not because I disagreed, but because I just couldn't deal.   Walking out of church was just something I could not imagine myself doing...yet I did it.

So maybe this is the same sort of thing.

When I was a kid, I read a book in a Reader's Digest Condensed volume (I was reading those in, like, 4th grade), set in, I think, a European country in the 30's or 40's...I don't remember much about it at all, but I do remember that the main character was, at one point in the story, a young boy. He was Jewish, and one incident related some pretty ugly antisemitism aimed at him.  I didn't understand it at my age...he hadn't done anything, and what folks were calling him had no basis.  I remember asking my mom about it, and she tried to explain prejudice to me.  I heard her, but it didn't make sense.  Why should it matter?  But, I grew up in the very non-diverse agricultural Midwest and such things were just not part of my world.  It never made sense.

I could understand cultural differences; there were culture issues even amongst people with the same skin tone.  But a difference in culture shouldn't mean a difference in the value of a person....although it could mean that someone could offend, or be offended, by something that embodied an entirely different concept to another.  There was one phrase I grew up with, which meant 'to be honest', that I learned at a much later date had an entirely different connotation to people of color.  I could identify two different non-racial bases for that phrase, both embedded in the culture I grew up in, but the person who pointed it out to me wouldn't hear anything other than a racist statement in it. Any attempt to point out that it could possibly have come from somewhere else only made the matter worse as the person believed that such statements were cover ups.  Nope.  I had never associated the phrase with people at all.  But that wouldn't matter if someone heard it as a racial statement.  So I learned not to say it anymore.

I saw the social media posts last week the same as everyone and...if you clicked through on the link above, you'll know what I mean when I say that my visceral reaction was much the same as listening to the account of the partial-birth abortion.  I was nauseated.  No one should die in such a cold-blooded manner.  No one.  It's not right, it's not fair, and it should never, ever happen.  This wasn't a case of a quick reaction to a situation, or a heat-of-the-moment mistake or anything else. It was a murder and it was there on my newsfeed.  It made me angry, that such things could...and did...happen.

But beyond that,  I read stories and saw posts and realized that this wasn't unusual...it was just publicized.  And I got angry again.  I have friends of many ethnic groups; my kids have friends of all colors.  We have a multi-ethnic staff at church...co workers, pastors, choir members, solid citizens all of them.  Young men and women who are gifted and talented...amazing people...whose skin is darker than mine.

Any one of whom could end up accused of something just because they were in the wrong place at the wrong time.  I mean, taking a walk in the neighborhood?  Are you kidding me?  Presumed guilty?  Just because of their skin tone?  That is wrong, wrong, wrong.

And I was angry and nauseated again.  I wanted to make the people who only saw skin tone.... get a clue, go away, leave them alone, get a life, learn the lesson...SOMETHING.  But I didn't know if I could really say anything...is there anything I could say that wouldn't be condescending or patronizing?  That wouldn't hit the cultural triggers and sound differently than I meant it?

But I believe in the power of prayer...and I can pray.  Pray that the crazy stops.  Pray that change happens...that our law enforcement roots out the individuals that abuse their position.  Pray that awareness comes to those fear-filled folks who are too quick to assume the worst of someone they really don't know.  Pray that NO ONE has to endure the humiliation of being judged or treated with disrespect.

So...I don't know if sharing that was a good thing or not.  I just know that this time, I couldn't keep my opinion entirely off the 'net...
Posted by Lisa Laree at 9:49 PM 4 comments: