A Blast from the Past

Something like 3 years ago, I happened to land on a shared photo album from a fellow home sewing enthusiast...and she had a most awesome jacket posted.  I asked her for the pattern; turns out it was a long out of print Vogue Oscar de la Renta pattern.  Ah, well, perhaps I might stumble onto it one day...

Well, as we were driving back from Florida I got a message from that lovely lady, who had found a factory-folded copy of that pattern in my size.

Y'all, I ordered it right there from the car.

It came this week. 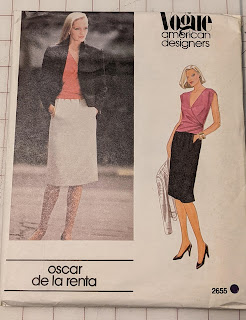 This one's from the glory days... 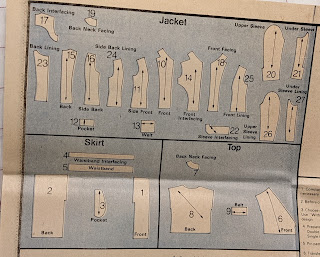 SEPARATE PIECES FOR THE LINING AND THE INTERFACING.

Who DOES that anymore?

Of course, due to its vintage status, I don't expect it to have the bust point marked, or the finished garment dimensions anywhere to be found.  I haven't unfolded the tissue yet to verify it, but I can use a tape measure to determine what alterations I need.

I paid a fair amount more than that, especially throwing in shipping.  But what I paid is comparable to the current list price on designer patterns.

Not sure when I'm going to work this into the sewing queue; I have done nothing to the blue cardi since I cut it out...although I did put blue thread on the serger, lol.

I just realized the other day that, while I have chatted in online groups about The Cardigan, I haven't actually posted about it here...

So, back in January I posted about doing the 'Start with a Scarf' wardrobe building exercise this year. But Janice didn't start the wardrobes in January...she actually picked the scarves and posted a 5-garment core group back in December.

I did some poking around on retail sites to see if I could purchase any of the beginning stuff that wasn't already in my closet; I found a good deal on a cashmere crewneck sweater but came up empty on everything else.  I had blue jersey knit in the stash for the knit shirts but could NOT find a blue cardigan.

So I ordered some blue cable knit from Emma One Sock and, armed with knowledge from folks who had blogged about sewing that rather contrary fabric, began the debate about what pattern I should use.

I finally settled on McCall's 6844 ...mostly because it didn't need any closures, lol.  Also no skinny little bands to deal with.  And I have made MULTIPLES of that cardi in the past...although I've always been using a nice stable double knit.  This floppy sweater knit would be a whole 'nuther deal.

I knew that the cutting would make or break it, so I  actually played around with a layout after I cleared all the procrastination other projects out of the way (I actually had to make a handful of masks for the family vacation to see the mouse last week).  But, home from vacay, nothing in the way, it was time to start.

Normally, this cardi would take about four hours, start to finish, but I spent all day today (around laundry and a couple of other things) working on cutting it out.

First, spread the fabric evenly, being careful not to stretch anything; use a ruler to make sure the cables are dead straight, and lay the front piece so that the front seamline (where the collar/ front band joins) is abutted right up against a cable.  This puts a cable pretty much on the center of the shoulder and running down the mid front, although I do have a bit of the cable in the side seams. 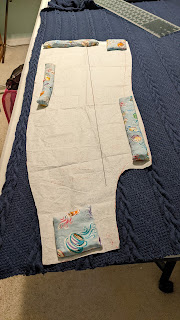 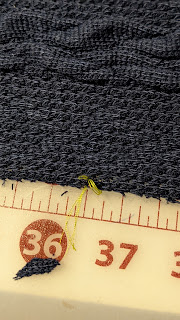 Flip the front and repeat.  For the back, I put the fold line on a cable, then flipped it so the fold line was still on the same cable to cut one back piece w/o folding the fabric.  Marked the notches; cut all 4 of the collar/ band pieces with the outer edge seam on the edge of a cable; that put the jacket body seam in the middle of a cable, which may prove to be too bulky.  If it is, I will trim it off and just have a slightly narrower front band, but I did a little practice serging on scraps and it really didn't seem to have too much trouble sewing on the grainline, even over the cabled bits, so we'll see.  I cut the sleeves with a cable running down the middle, from the shoulder point to the wrist.

It is a pain to do a single layer cut out, but given the crucial necessity of everything being balanced and straight I didn't see any way around it.

This is a busy week; hoping to get to sewing on the weekend.

It is going to take me a bit to get caught up; the March wardrobe additions will drop next week, lol.  If I want to use this for the Stitcher's Guild SWAP contest, I need to get a move on... I need to sew a minimum of 9 coordinating garments by the end of April, if I use the 'one purchased, one previously sewn' options.

But in all honesty, I think the worst of this is behind me.  If it stretches too badly under the double needle I may have to hand hem it but that won't be too onerous.

The next thing up is about 4 knit t shirts; those should go pretty fast. Then a woven shirt that might take a minute...and then whatever comes down for March...

Posted by Lisa Laree at 9:38 PM No comments:

In which she made nothing she wore.... 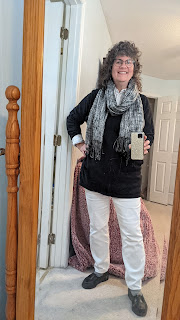 So, this is what I wore to work on Monday.  The day after we got home from vacation; the red fuzzy blanket is mercifully covering the pile of laundry waiting to get a trip through the machines.  The white jeans and black sweater tunic are from Lands' End, I think the white shirt came from a local department store and I honestly don't remember where I got the scarf. The SAS loafers are something like 12 years old.

Why am I sharing this when I made none of it?

Because at some point on that day I clicked on my Facebook memories, and came across a rant from several years ago that was a reaction to an article I'd read online on 'How not to dress like an old person'.  I don't think that was the title, but that was the gist of the article.

One of the things that the article claimed makes one look old is 'never wearing white pants in the winter'.

Well, on Monday, I just so happened to wear white pants so I snapped a pic to prove that I surely do not look old, lol.

Seriously...and this was the point of my rant...why would 'never' doing something fashion wise make me look old?  Two days later I wore doubleknit pants with a striped t-shirt and a knit cardigan (all made by moi, btw)....did my white pants on Monday negate the fuddiduddiness of the home sewn knits?

Now, there are some things that I agree will make me look less than my best...wearing clothes that don't fit, or that are faded, pilled or otherwise worn looking, or reveal the bumps and bulges a little too literally...but to say that 'never' doing something will result in me looking better or worse on any given day is just a little far fetched.

I wore the white pants because it made me happy.  Also because, well, laundry, lol.

Which I need to hasten off to begin. Planning to start construction on the planned wardrobe this weekend...crossing my fingers it happens!