A New Dress for a Special Service

Thursday night, I came home with the beginnings of a cold.

Friday night,  it was even showing signs of a sinus infection.

Lotsa rest and lotsa water on Saturday, and it seems to have held off getting worse, at least, but...I have no singing voice.  Croak croak.  So I wasn't in choir today.

But, well, I had to be at church nonetheless.  The 'graduation' for the folks who have done the school of ministry classes at church was this morning, and, since it is covered by the same online school that I did my master's coursework through, I got to participate.

We really didn't have time to do the whole cap and gown thing, so we were told to just wear dressy clothes for the ceremony.

So I needed something truly dressy in the choir colors.  Because, you know, I intended to sing in choir before I lost my voice.

Last year I'd bought a length of black rayon twill with the intention of making a Style Arc Tori Designer Dress...and, black being an acceptable color for choir, I decided this week to make it.

Problem was I didn't have time to start working on it until Thursday.  Which was when I started feeling punky.  I cut it out Thursday.

And I had a little debate.  I'd remembered the collar being a bit tricky...and I was short on time...and it was black fabric, so it would have been really hard to see exactly where the start and stop points were...so I bailed and decided to just face the existing V neckline.  I could fill it in with a pretty necklace, right?

The dress went together pretty much as I remembered; except this time I thought I should like to have added a cut on facing to the armholes; there's really only enough to turn it back once. Not as nice a finish as I'd like, but it's black so it doesn't show.

I think I used what was meant to be the wrong side of the fabric; one side was a bit shiny and had a slightly more pronounced  twill; the other side was more matte.  I decided I liked the matte side better, but I had a time keeping it straight; there really was only a slight difference.  I didn't actually sew any pieces together wrong, but I spent a lot of time flipping and comparing as the pins I used to mark the right side somehow kept falling out.  And I wasn't feeling particularly sharp either.

Aaannd...when it was finished, the neckline was much too wide and deep to be comfortable.  I didn't realize how low the point of the V is; the collar piece fills it in a lot more than I expected.

So the dress will be worn with a cami under and, very likely, a scarf over.  The scarf I wore today was actually something that would work for the choir...but I actually chose to wear it because it once belonged to my grandmother.

It's probably not the most flattering dress in the closet...but it's sure comfy.

And, here's a funny...when I applied for the Master's program, I selected the Master of Religious Education degree.  Just as I was about to start, I got word that the school was changing up the structure of their degrees and the MRE would just become a Master of Ministry.  So I spent the whole year believing I would receive a Master of Ministry, using #mastersofministry on all the Facebook posts as I chronicled the journey.

Welp, guess what the diploma says? 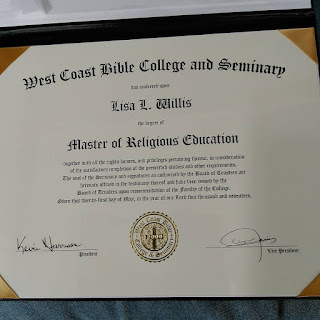 Random patch of light from the skylight...you'd think the photographer would notice things like that.

And, we had a photo shoot a couple of weeks ago; long story about how that happened but My Sweet Babboo and I  were schooled a bit on taking pictures.  The photographer kept telling me to 'pop your knee'.  So I had to try it for a Choir Wardrobe picture.

At least it makes me laugh.

So, there was no choir photo last week; I simply didn't have time to get a photo.  We had a special service Sunday evening, with a choir, in dressy black, so that meant an early call with barely enough time to eat something and change clothes between 3rd service and the 4 PM call. So this is the first glimpse of May's colors...what I'm calling hydrangea blues (grayed blues ranging from light to a medium dark; no navy or royal) w/ black and/or white.  The top is fresh out of the sewing room; it's a crinkle rayon remnant from, I believe, Textile Fabrics' (Nashville) moving sale a couple of years back.  The pattern is New Look 2672, a pattern I've been working with for a while to see if I could get a TNT easy fitting woven T shirt.

Over the course of about three iterations, I added a bit of a FBA, pulled in the neckline somewhat (the first one I made was definitely not bra-strap friendly on my narrow shoulders), eliminated the back seam/snap closure, and used a self-bias strip to face the neckline. I may have lengthened it a wee bit; I'll need to see if I made notes.

I really like it in the drapey rayon and it does very nicely for a quick pop over; the only problem with it is that the cut-on sleeves don't play well with a topper.  Any jacket pushes the shoulders in and makes the neckline kind of gappy.  But with a pretty fabric it stands alone very well.

I really should review it one of these days.

Skinny jeans from Talbots.  They don't fit terribly well, but they honestly don't look too bad if I'm not popping my knee. LOL. I've worn them mostly with long tops and boots; it was a spur of the moment choice to wear them today.
Posted by Lisa Laree at 10:07 PM 1 comment: 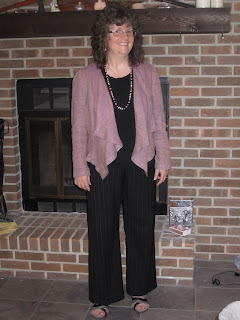 The last day of the month.  Went with a 'column' and a jacket in the more-or-less appropriate mauvish color.  Loes Hinse Oxfords in pinstripe tropical wool, a Jalie 2566 T in black rayon?  Cotton?  I don't remember!  And the as-yet unreviewed New Look linen jacket.  Which would be perfect if I could figure out way to put some small pockets in it.    The dark flecks in it are actually navy blue, but they read 'black' so it's ok.

Next month is a range of blues...from a periwinkle to a medium royal.  With black and white.  I probably have enough to get by, but I take advantage of a sale to get some jersey for a t shirt.  I don't have a suitable solid blue t shirt... :-)

In other news, I pushed hard all weekend and submitted the last assignment for the Master's degree last night.  Just waiting now for the final grade...and instructions on what to do to get the diploma.

My immediate goal is housecleaning...and I honestly think it's going to take a while to get it back in shape.  It's been neglected far too long by far too many...sigh.

So I'll sew a bit here and there but I want to be able to have drop in guests without feeling completely humiliated.

All my domestic talent landed in sewing, I'm afraid....
Posted by Lisa Laree at 6:08 PM 2 comments: