Ok, that's a crummy fuzzy photo.  But everyone in the family was off doing other stuff today, so I had no photographer.  Which means a  'set the timer and jump in front of the camera and then crop it down to the wee image' pic is the best I can manage.

Oh well.  At least the dribble from the bobbled spoon at lunch is not visible. LOL.

So, for the only Sunday in August I managed to be in town on Sunday,  the wardrobe colors are gray,  navy and 'ballet pink'. What I happened to pull out of the closet was.Jalie 2566 T in floppy rayon/lycra jersey; Sewing Workshop Plaza Pants in dark dark blue tropical wool and New Look 2672 jacket in a mauvy pink/ navy flecks linen tweed, which I'd spent about 20 minutes ironing a couple of days ago.  All of which you can just sort of make out.

And the t shirt and the jacket are in the laundry now.

Next month...black, white and gold.  No forest green, which kinda surprised me.  It was about all I could do not to type 'Boiler Up!' in the comment box on the facebook post w/ the color samples.  But, as I would not appreciate a 'Roll Tide' when we wear red and gray...I held my peace.

Do unto others and all that.

It's been a few weeks... and I freely acknowledge that this is the kind of blog post a lot of folks skim or skip.  But I feel like I've been gone for ages and need to 'splain!  LOL...

In that few weeks, we made a trip to visit family, which also turned into a bit of a tour of Hoosier history... 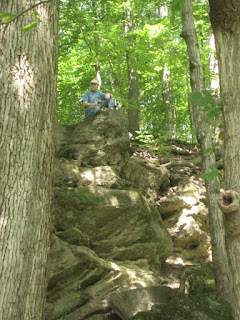 Prophet's Rock at Battleground.  A turning point in history...a tragic conflict that should not have happened. 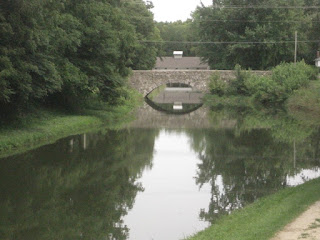 A bit of the restored Erie-Wabash canal in Delphi.  Hard to believe the barge will actually fit under that arch.  There's quite a nice park there...and a very chatty blacksmith. 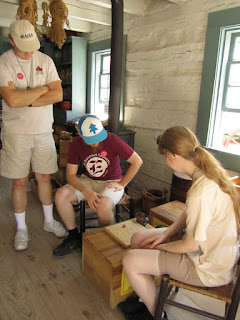 Learning Nine Man Morris at the general store at Connor Prairie's Pioneertown.  That was a fascinating day...all the costumed folks are one hundred percent in character for 1826.  Hope to go back and stay longer. 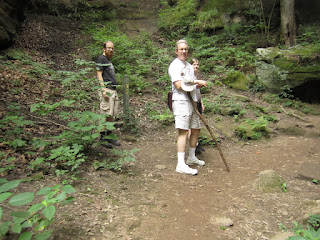 Headed for the boulders on Trail 9 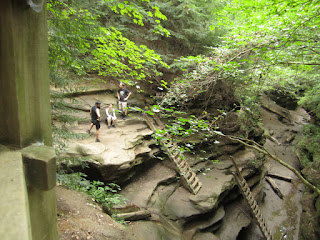 The famous ladders of Trail 3 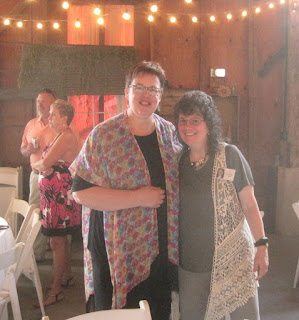 Me and my BFF BJ...who could only stay a few minutes as she had to beat it across town to play in the pit orchestra for a production of Annie!  I have SUCH talented friends!  And, btw, she sews better than I do... ;-)

There was also some work going on, as my mom had had bypass surgery about two weeks before we made the trip and she was still in rehab.  So I did a little cooking and kitchen cleaning and laundry for Dad while I was there.

Once back in the Rocket City, we had just enough time at home to get a few work hours in and laundry done, then My Sweet Babboo and I hit the road to celebrate our 37th anniversary and, incidentally, see the eclipse.  Fall Creek Falls State Park in Tennessee has been on our 'we need to go' list for years and MSB made reservations in APRIL OF 2016 so we could be there this weekend.

The park is HUGE...it's really intended for folks to drive around to the various (spectacular) views, but we did some hiking (a large portion of it along the road, which is not so much fun) just the same.  I had over 18,000 steps recorded on my fitbit both Saturday and Sunday. 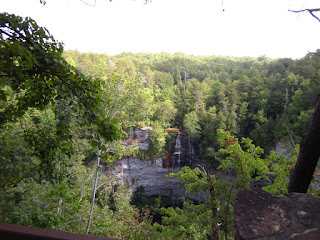 Fall Creek Falls, from which the park gets its name


I'm telling you, if you've never seen a total...put it on your bucket list.  I don't think I've ever seen a black as absolute as the moon completely covering the sun...which, of course, doesn't really show in the photo at all. 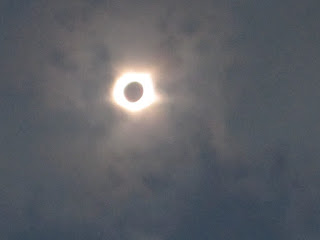 We ended up staying an extra night, just to avoid the projected traffic crush, and drove back Tuesday morning and went into work a wee bit late.

Hopefully I can get the laundry, et al, caught up soon and get back in the sewing room...I've a pair of Helix pants that have languished about 1/3 done the whole month.