So, two days before the last day to wear the bright turquoise blue, I pulled out some rayon/lycra jersey that  had been in the stash since Feb 2012. It was too intense for the lighter turquoise we were supposed to wear that year, but it was dead on the color for this year.  I cut out the Jalie Pleated Cardigan, and, the day before the last day to wear that color, I managed to get it through the machines...much against their wishes, apparently.  Or it could be that flimsy rayon jersey is just beastly to sew.  We're good so long as no one looks really close

But it meant that I got to wear it on the last day for the bright turquoise.  Along with  the gray sparkly Simplicity 2603 and new dark wash Levis.  Good ol' Levis...still under $40.

That's the fifth Jalie 2919 cardigan I've made; I altered up the sleeves, and there's a fishtail sweep in the back, both of which I've done before.  But this time I actually followed the pattern instructions and put the pleats to the OUTSIDE.  I didn't even notice they were supposed to be that way until after I made the 4th one...

I have enough of the turquoise to make another Simplicity 2603.  Twin set time.
Posted by Lisa Laree at 8:48 PM No comments:

My ironing board cover was showing its age. 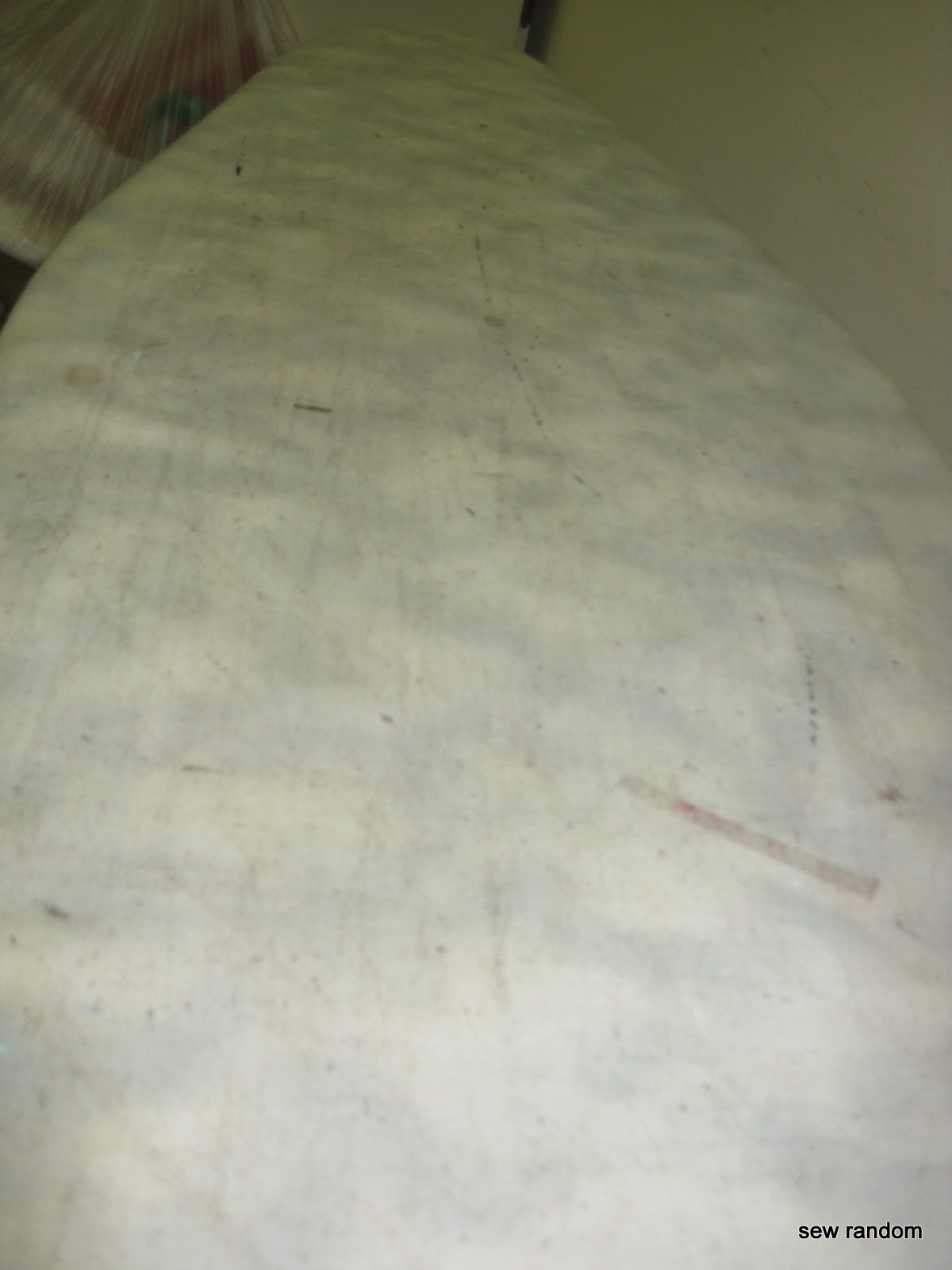 I'm not sure exactly how old it is; I *think* I bought it after we moved into this house, which would mean it's no more than 10 years old, but I found some photos with the current cover in 2007 and it was already rather marked up. It was, I believe, the 3rd ironing board cover I have used since we got married in 1980.

But over the years, water stains, odd bleeds and mucho fusible residue  had left its mark.  I  had gotten to the point where I was laying an old shirt over the cover to keep it from marking white fabrics.

So, when I was in Target a couple of days ago and happened to walk through the homegoods section, I spied ironing board covers and got one.  No print comparable to the sky-and-clouds that makes me smile, so I got a plain one.

For some reason I decided last night that it was time to do the switch.  I pulled the iron stand and cord support off,  unclipped the drawstring and released the velcro straps and pulled it off.

And was astonished to see that the inside of the cover was just as nicely finished as the outside.  It was self lined and...oh, my, the seams are all on the inside...could it be???

I turned it inside out and put it back on the board.  Except for wrapping the velcro straps backwards, with the free end next to the board, it was completely reversible.  I had a nearly ...a few water marks had bled through...new looking cover right there.

I put the other one in the cabinet for use  at a later date and commented to my hubby I had purchased a better cover than I knew.

Then he asked me if I replaced the pad.

See, he's gone on a wool blanket kick.  First he made his capote from a wool blanket, then he began scouring ebay for good deals on wool blankets.  He made another capote for a friend, but the blankets have piled up.  One of them was a green army blanket, which turned out to be too small for his purpose, so he gave it to me for an ironing board pad.

I'd forgotten about it.

But, whilst I had the clamped accessories off the board, it seemed a good time to add the wool padding, so I pulled out the blanket, washed and dried it on hot to felt it up some, then cut it out, using one of the old poly pads as a guide (I actually had 3 pads on the ironing board...the original one, the padding from the second one, and the padding that is built into the current cover)

I serge finished the edges, although that probably wasn't absolutely necessary since it's been felted, then put it on the board.  I threw away the oldest poly pad (not pictured anywhere) as it was pounded paper thin, but I kept the one I used for a pattern as it was still pretty cushy.  I cut two wool pads and laid them over the old one.

Then I rather carefully secured the cover, reverse-side- out, over the triple layer.

You can't even tell that's the inside, can you?  I figure it's going to be good for another 5 years...and I've got the replacement already.

It might take me a while to get used to the smell of the wool under the steam iron, though...

And, I might have enough of the wool to make a button-in lining for my trench.  Maybe. ;-)
Posted by Lisa Laree at 9:10 PM 2 comments:

I'm cutting myself a little slack; it wasn't just Sunday...it was also The Artist's birthday.  So we had a very busy day.

April colors are deep turquoise, coral, yellow and gray. I'd worn nearly all my acceptable wardrobe on Easter weekend.  So I pulled out the 'I only wear it if I have to' yellow fuzzy knit Simplicity 2603 top and put it with the gray rayon jersey Sewing Workshop Ann's Cardigan, after I mended the teeny hole in the shoulder that was beginning to get bigger.  Such nice fabric...and it had holes.  I thought I had managed to lay the pattern out around them, but one landed just outside of the seam allowance on the shoulder.  The darning job is  not as good as my grandmother would've done, but it looks better than the hole.

The jeans looked darker...and therefore dressier...in the mirror.  I think the lighting washed them out a bit.


Good darkwash jeans are so hard to find.  I should just bite the bullet and get a jeans pattern tweaked and make my own.... ;-)
Posted by Lisa Laree at 6:42 PM 5 comments:

No choir post this week; we watched first service via 4G as we were driving through southern Indiana.

My father-in-law turned 90 on Friday, and all the far-flung children and grandchildren congregated for a surprise celebration.  Only one in-law couldn't make it, due to an unalterable schedule conflict.

Just to make this applicable to a sewing blog, I will say I packed jeans, my gray Jalie Jeans jacket and an assortment of TNT Jalie T shirts; it was no-hassle packing and dressing.

Five services spread over 3 days.  And, as is usual, to talk about what I wore just seems...kinda pitiful.  We had an amazing word.

So, if you want to know why I bother talking about clothes when there's so much more significant subject matter available, I'll refer you to the post that 's linked on the sidebar for explanation and throw out my disclaimer that  'It really ain't about clothes...but this is a sewing site'.

The choir wardrobe colors for April are: 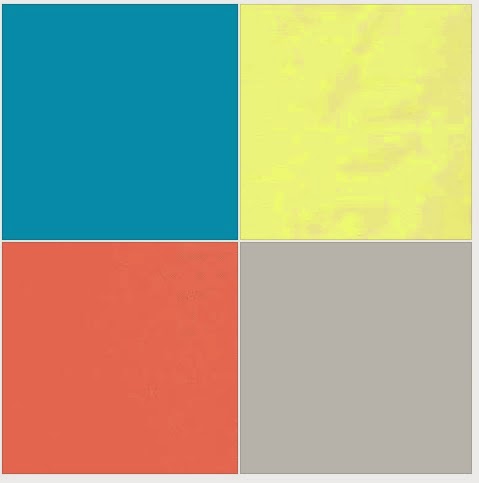 Or sort of, anyway.  Turns out the representation of that turquoise on my monitor was a bit off from what the actual color is...which is pretty deep and intense.  So the turquoise pieces I had picked out to wear this weekend got put back in the closet.  I do have a 3+ yard piece of rayon jersey that IS the right color, and it is currently on the cutting table to be turned into a Jalie pleated cardi (linked below) and a Simplicity scoop neck top, but it didn't happen in time to wear it this weekend.

So I made do.  Fortunately, I had things in the other colors from previous years. :-)  But I hadn't switched the seasonal wardrobe yet, so I had to dig some things out of the off-season bin.

Friday night...it was Jalie and Jeans.  2919 Pleated front cardigan, in a coral rayon blend, with a sleeveless Jalie 2682 top, in what is actually a kinda crisp rayon jersey.  And, yes, that's a new haircut; the stylist wanted to straighten it so I have a hair style this weekend that probably will never quite be replicated by yours truly.

Saturday I grabbed the sparkly sheer knit Sewing Workshop Eureka Top, which is over a gray rayon/lycra Jalie 965 tank because it can't be worn alone for any reason.  The loopy scarf was made for me by my sister for Christmas.  And jeans.

For Sunday, I pulled out my linen Vogue 1055 Adri Jacket and ironed the storage wrinkles out of it.  It's over a rayon/lycra jersey Vogue 2925 top that's a good 4 years older than the linen topper and matches purely by serendipitous chance.  However, the effect would be more impressive if I had had time to get the photo before we left for church, instead of when we got home many hours later.

And I attempted to recreate the professionally-done hairstyle the same morning as crock-potting the roast and veggies and baking some goodies to treat my data entry volunteers who were working today.  Limited flatiron experience and less time and...why I'm embracing the hobbit hair... ;-)

We'll see if I can squeak out enough time to get that cardi/top set done before the colors change again.
Posted by Lisa Laree at 11:52 PM 1 comment: