Well, for the second month in the last 8, we're wearing black and metallic gold for choir.

The first go round, I bought one RTW t-shirt, which was not entirely successful, and otherwise made do with a few oddball things I had about. But when it came 'round again, I thought, 'Ok, I guess I need to put some gold stuff in the closet'.  So I ordered a couple of pieces from fabricdotcom.

When the box arrived and I opened it, I had to grab the sunglasses.  There was some serious glitz there.

And, after as much dithering as I could allow myself, I made the serious glitz up into McCall's 6844, the short peplum view.  I've made that cardi 4 times now -- two with the peplum and two of the longer straight cut -- but still haven't reviewed it.

I think I need to tack down the reverse bits; the whole collar assembly wanted to flip to the outside, which exposes the seam.  Not a good look.

I didn't do a single-layer cutting layout;  the knit is not pricey and the jacket is basically stage wear and I didn't have much time.  So the zigs could've met up with the zags much better in a couple of places.  It's a foil printed scuba knit which was much more comfortable to wear than I had anticipated (I really expected it to be icky and clammy and plasticy, but it wasn't).  Still...this is not likely to be worn much outside of choir.  I'm not that blingy in real life. ;-)

I actually did something I HATE doing...I pulled the thread off the machines for the WIP white blouse and bagged it up before it was done.  So the white blouse is still going to be on the UFO list for a while longer.  I need to sew up some of the other pieces of fabric that have arrived already this year.  I'll get to the white blouse...eventually...
Posted by Lisa Laree at 4:12 PM 2 comments:

The blingy gold and black zig-zag scuba knit (see previous post) is still laid out on the cutting table; I was suddenly seized by an attack of indecision on which pattern to use.  I had in mind a peplum style, but then thought about those zig-zags and remembered a dress in which the changing grain on zig-zags just looked kind of...drunken.  Not the look I was going after.   I really just need to pull out something and go for it; I don't have enough time to be wishy-washy about it.

But in my wishy-washy trying to make up my mind, I am working on the white blouse, so at least something's getting done.  Slowly.

Meanwhile, I still had to come up with something black and metallic gold to wear today.  I do have a RTW Tee, purchased from jaydotcrew, hanging in the closet, mostly to remind me why I sew.  It was about $30,  it's cut off grain, the neckline's indecent and it's too short.  But it's shiny gold. So it gets worn...carefully.

In this case, I've got a black rayon/lycra jersey Jalie 965 Tank as a bottom layer, helping with the too-short-hem and the too-low-and-wide neck.  Good enough.  Black poly/rayon/lycra ponte knit Loes Hinse Oxfords, and a cashmere blend cardi from Lands' End and I'm all good with the black-and-gold for today.

Now to ponder some more on the gold zig-zag print.
Posted by Lisa Laree at 6:29 PM 3 comments:

The Power of Positive Thinking

We had a big conference at church last week and the stage had not been reset for the choir, so there's  no choir wardrobe this week.  So I will share with you my ridiculousness.

I still have not sewn more than a couple of seams in all of 2017...and I ordered more fabric.  Is that optimism, or what?

Because the choir colors for the next two months are pretty much conspicuously absent from my wardrobe.  So I ordered a bit... 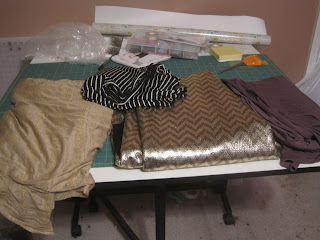 We have metallic gold and black for March, and mauve/gray/black for April.  The sheerish knit on the left has metallic stripes in it and I intend to turn it into a little cardi that caught my fancy in an old Burda magazine.  The chevron gold stripe is printed on a scuba knit; I'm pretty sure I'm going to make that ubiquitous  McCall's jacket that I've made up a few times, because what else would you do with something so over the top as that?  The Dusty Purple on the end might work for the mauve...I haven't seen a sample yet to know if we're talking dark mauve or light mauve.  But it's a pretty bamboo that will make a nice top, even if I can't wear it next month.  And the black and white stripe because...well...it's classic.

The upside is that these will all be very quick things to sew up.  Once I manage to actually get to my sewing machine.

No more  fabric in until I've sewn up the 20 yards I bought (or an equivalent in already-stashed-goods, lol).  And I mean it.  Even if that means I wear the same outfit four Sundays in a row...
Posted by Lisa Laree at 7:24 PM 2 comments: