Just to think about something other than Christmas costumes for a few moments, I thought I would post another treasure from the Hoover Trunk.  I have a backlog of photos that I took a month or more ago and I'm forgetting things, lol.

This is what appears to be a child's dress that looks to have been in the process of being deconstructed when it was put into the trunk and no one came back to it.  It's a purplish-brown, and I'm going to guess that it's silk. 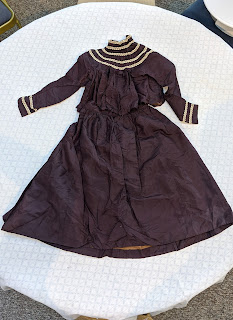 For reference, the table has a 56" circumference. I believe the dress was originally one piece, but the bodice has been separated from the skirt and trim has been removed from the skirt so I think it was going to be remade into something else but, like so many of my projects, it got stalled and apparently never completed. 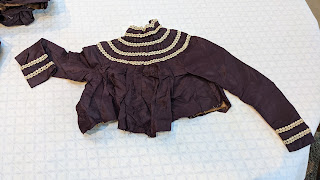 You can see the raw edge of the waist line seam; I believe it had a gathered pigeon-front as the front is longer and wider than the front lining. 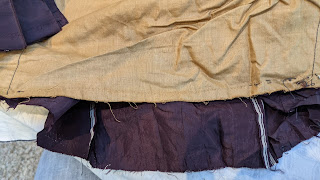 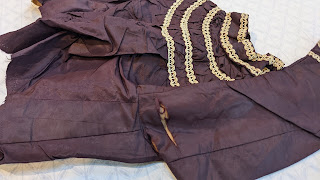 The side bodice and underarm look to me to have been pieced.  It could have been deliberate, but it doesn't really line up so I think this was making do with bits of fabric.  I wonder if it actual was  once a woman's dress, made over for a child.  It's very interesting; just after I photographed this  I came across Nicole Rudolph's video on shattered silk, and I suspect that's what I have here.  There are other pieces in the trunk that are more suspect, but as this has broken down in a few places  (Like the split visible above)  I am wondering if this was the case. 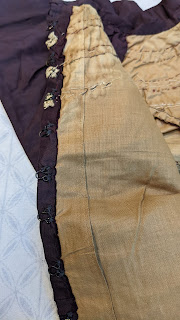 It closed with hooks and eyes; quite tedious for a young girl I'm sure! 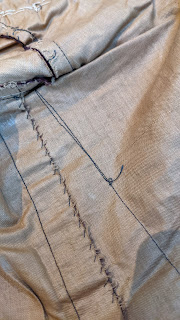 It is completely underlined in cotton 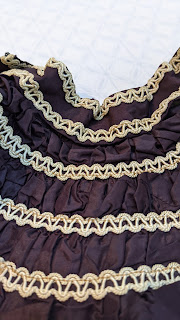 The stand up collar is actually a separate piece, completely finished off and hand tacked to the neckline. 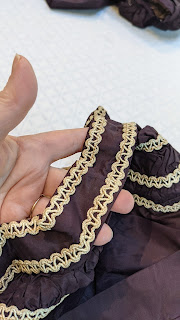 The other sleeve also is splitting; it could be just a lack of wearing ease.  Comparing the two picuters, the seams are not the same on either side, which also makes me believe the bodice was pieced from repurposed fabric. 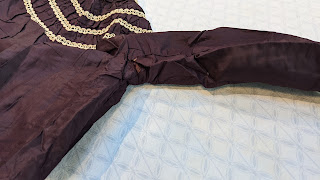 The skirt is fully lined, with a placket entrance and a faced hem. 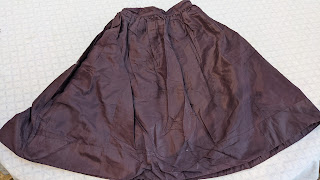 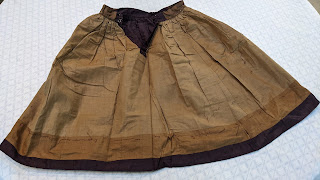 The lined waistband is opened at the top, presumably where the bodice was removed. 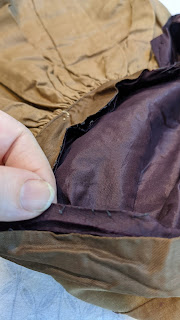 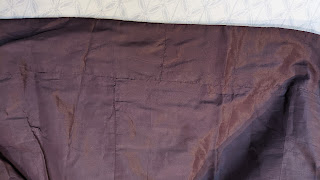 There is a band along the bottom that has seams that do not line up with the seams in the main body of the skirt. 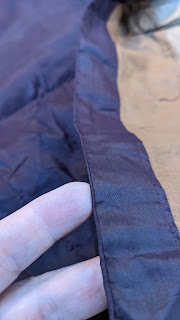 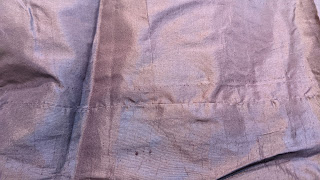 You can clearly see the parallel stitching lines where some trim was removed; I'm guessing it likely matched the trim on the bodice.

It was a pretty somber dress for a little girl.  I wonder what it was supposed to have become in its next iteration?

Looking at a make-do job...

I'm sure there is someone out there who will look at this post and think I'm making fun of what someone did a couple of decades ago.

And that's not the point at all.

In the 'I'm doing small tasks in my spare time' category, I brought a pair of knickered-up pants home to replace the spent elastic.

Only as I got into it I realized I was looking at something else all together.

Now...let's say you're a mom in the early to mid 1990's and your youngster is in the church Christmas production.  Time is tight and you're handed a pair of pants and told to 'just cut the legs off below the knees and put some elastic in them.'

Only...you really don't sew.  And you don't own a sewing machine.  But all the moms have been asked to sew /altar up/ convert/ create their kids' costumes.

Well...you cut the legs off as best you can with the scissors you have. 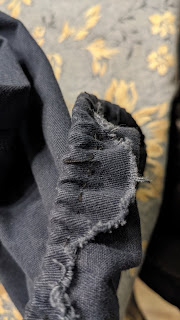 No sewing machine means you're going to have to hand sew it...even though you haven't done any handsewing since that cross-stitch thing you did in 7th grade home ec, er, family science...

And, you know, you don't have any elastic...how much would you get?  Maybe...you'll make do with what you have... 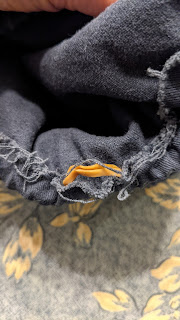 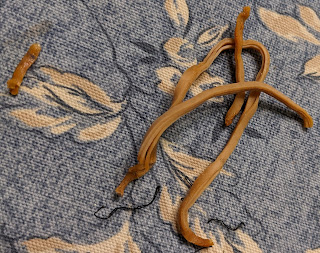 After all, it's just for a couple of performances, right?  Grab a couple of rubber bands and have at it.

I'm actually pretty much in awe of this mom's ingenuity.  And I know it can't have been easy to hand sew that casing around the rubber bands.

She had no way of knowing that 25ish years later someone in another church in another state would be taking her hard work apart to fit those breeches on another kid.

It did what it had to do at the time for hers.

I missed a noteable date....

On November 4, 2005, I posted my first-ever blog post.  I meant to write something commemorative and appreciative and all the stuff you do on the 4th but I was at church absolutely all day and came home dead beat about 9 PM.

I didn't even think about what day it was at all.

Just hit me today that I missed the sweet 16 birthday of the blog.

Wow.  Sixteen years.  I went back and read some of the old posts from back then...and was shocked to see actual comments.  They are rare these days....I think, partly, because everyone's too busy to click through from whatever reading service they use (guilty).  And, probably partly because my participation in online sewing communities has dwindled considerably...same thing, too much busy, not enough sewing.  And folks are moving to video platforms.

I was quite surprised to learn a few months ago that I have a you-tube channel.  I guess I made an account sometime who knows how long ago so I could comment on videos and didn't realize that came with my own channel.

Anyway, even though I'm two days late...for those of you who've been hanging with me for sixteen years...or those of you who have been hanging around for any number of years...thanks for stopping by.  Church drama productions, school drama productions, SWAP wardrobes, the Vivienne Files challenge, the eternal attempt to actually sew up more fabric in a given year than I buy, the dreams of making fantastic garments that I'm too chicken to actually cut the fabric out for...sewing for my kids weddings...you all have been here. 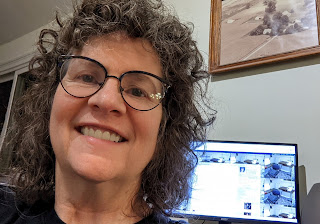 Here's to more sewing and talking about sewing and maybe throwing in something random every now and then...

Sewing for the 2021 Christmas Production

Somehow, this year I've inherited the position of Costume Mistress...which  means I'm doing more administrating (making spreadsheets and lists and delegating) than actual sewing.  Not sure I'm entirely comfortable in this position...ok, I lied, I am definitely NOT comfortable in this position...I'd much rather just be handed patterns and fabric and asked to make twelve lame' shirts, lol but, well, it is what it is.  It is good for us to be drug out of the comfort zone from time to time, right? Right?

Anyway, I have squeaked in a little sewing for the production.  Part of the problem is that the sewing room is migrating from the dump nook at the end of the laundry room to a now unoccupied upstairs bedroom, and that is taking much more time and energy than I thought it would, but we had a piece that needed mending so I thought I would do it myself rather than stick someone else with it, since it was all hand sewing anyway.

There was a fur-collared camel cashmere coat that just showed up from who knows where in the costume storage at the old church building; it was clearly vintage and when we did the edition of this show two years ago, two years after moving all the costume paraphernalia,  I looked for it for one of the 1930's characters but couldn't find it anywhere.  This year, the same character shows up in the re-write and I happened to open the right box and found the coat all smunched up.  And  missing all but one of the buttons. And ripped badly at the top of one of the welt pockets  But it fits the lady playing the character and she loved it.  So I brought it home, poked around online, trying to find some 1 3/8" vintage-looking buttons.  Found them at Jo-Ann's, to my shock, and I could order them for pickup at the store across town.

So I picked up the buttons...and a few other things, since a whompin' thunderstorm hit moments after I walked into the store and I had some time to poke around, and did the mending a couple of weeks ago.  Hit it with the steamer tonight to make it presentable to return to the costume shop.

I thought I took a photo of the original state, but, alas, there was no photo on my phone of the pre-mended coat.

I do, however, have some pictures of the damaged pocket... 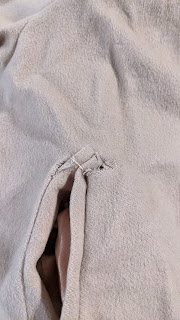 I tucked the welts back to the wrong side and it didn't look horrid; but, to my surprise, there was no interfacing at all supporting the pocket so I suppose it just caught on something and ripped. 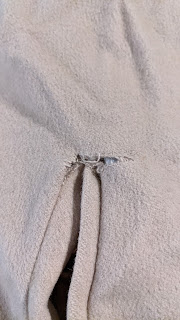 And the inside and outside of the mending job; I was able to whack a triangle off of the welt pocket facing to use to reinforce the rip.  Fortunately, it won't show much from onstage...I hope, lol. 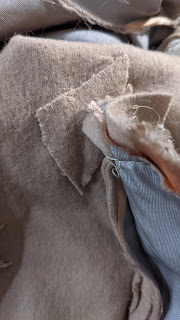 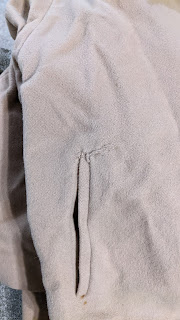 I took a pic of the labels in the coat: just to see what I could find out. 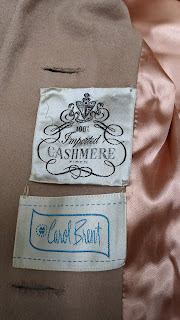 I googled it.  Turns out Carol Brent was a house label for Montgomery Ward's back in the day. 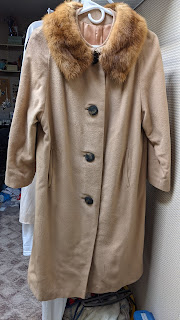 Never, ever would I have guessed that this coat came from 'Monkey Wards'.  By the time I was shopping MW's in the early 80's it was lower on the fashion ranks than Sears.  But the coat was fairly well made, despite the lack of pocket support,.  There's a surprising amount of hand sewing; the fur collar is hand tacked on so it could be easily removed for cleaning, and the fabric is luscious, slight moth damage and all.  And it is most certainly from the early 60's.  But we're trying to pass it off as 1930's so...don't tell anyone, lol.

My steamer is pretty pitiful,  The coat still looks kind of rumpled; that's as much as I could get before it vapor locked up and quit steaming.  But...it's a LOT better than it was when I started, all the same.  It may not look too bad on an actual body.  I hope.

Posted by Lisa Laree at 7:19 PM No comments: