In which Simple is the name of the game...

I'm not sure why I decided to layer up what I did, but, well, it was kinda fun.

Even though the sparkle doesn't show up at all in the photo.

Colors for Feb. are Black, white and Gray; this is my (yeah, not so black any more) newest black Lee jeans, with the new acquisition-sewn-right-up gray viscose/lycra jersey Jalie 2566 T-shirt worn under a gray sparkly mesh Sewing Workshop Eureka top.

Not flashy, not trendy, but very comfy.

But a small sadness; a bit after church, I realized I was missing an earring.  :-(

I'd only worn this pair a couple of times; they weren't terribly expensive so it's not tragic but it does make me sad.  I've no idea at all when I lost it.  The hook just somehow worked free.

I'd even had a little nudge to put a clutch on the back of them when I put them on this morning, but I didn't do it.

It's a Vogue 8669 drapey neck shell top, made in a grayscale print stripe silk jersey that I bought on sale...oh, 3 years ago?  Maybe?  specifically to make this top for our annual black-and-white February.  It's the first time I've sewn with actual silk jersey;  I didn't realize my hands were so rough and dry!  I need to get a photo of the top without a cardi over it (Vogue 8305 here); I've got the problems with the armsceye gap all  fixed.  I don't remember what I did, back when I tweaked the pattern again, but it worked. LOL.

I did do something a little different...I cut a band for the back neck, and, on my other tops, I folded it to the wrong side and stitched it down.  This time, I left it  on the neckline, and adjusted the depth of the pleats so the neckline is actually moved in about 5/8" on the sides. It feels more secure.

And I realize that, given the changes I've made to the neckline and the shoulders and the back neck, etc, my pattern probably is not recongizeable as the original.  But that was a great place to start and I've got 4 of these tops now that are very nice, even if the first two really do need a topper to cover the gappy armholes.

Black RPL doubleknit Loes Hinse Oxford Pants...which I reviewed in 2004 and no longer has valid photo links.  I have a couple of pieces of fabric earmarked to be Oxfords in the SWAP plan...if I can get to it.

I finished the blue cardigan that I was making from piece 2 of the fabrics I've acquired so far this year.  But it's got to go through the wash; I had a couple of developments in the construction process that I hope will get reset once it goes through the laundry.  We'll see. 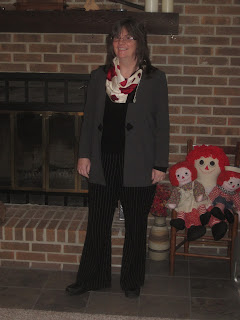 February choir wardrobe colors are black, white and gray and...for today only...we could add a 'splash' of red or pink.

So I've got the gray wool/lycra Loes Hinse Bolero jacket...again...and my black/white stripe RPL modified Loes Hinse Oxfords, and a black (I can't remember if it's cotton or rayon...) Jalie 2566 long sleeve T, with a scarf I purchased from Talbots, oh, 8 ish years ago?  It's a heart print...perfect for Valentine's Day.  Maybe too perfect...I think it's kinda like the holiday sweater that only comes out during December.  But it made a great 'splash of red'.

I'm late posting...My Sweet Babboo and I took off after church for an overnight at our favorite local retreat-on-the-bluff, and I sewed yesterday instead of posting. :-)

But I got two tops finished on the long weekend and got a good start on two more garments...a t shirt and a cardigan...before I ran out of blue thread and had to wait until I got some more tonight.

So...I'll work on that a wee bit more before I retire for the evening.  I need some new things; it's good to be sewing, even a little...
Posted by Lisa Laree at 9:21 PM 2 comments:

Black, white and gray.  Sounds like February, doesn't it?  (we can add a pop of red or pink next week as it is Valentine's day...lol).

But I wanted to try the monochromatic gray, which, according to the featured Bloglovin' style post, is tres vogue right now. 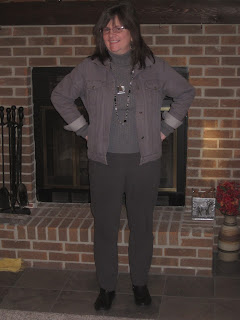 So.  A gray RTW baby cable cotton T Neck sweater,  the gray denim Jalie Jeans Jacket, and a pair of wool/lycra pants that I made from a Burda pattern  back in something like 2003 that I might or might not have reviewed but am too lazy to go look it up.  The pants fit really weirdly and I threw them into the back of the closet...now, 15 pounds later they fit fairly well.  Ya never know...

I made the long necklace, too, discovering that wire work is not as hard or as time consuming as I thought it would be.

Another craft to stash stuff for...lol...

Speaking of stash, I HAVE CUT OUT EVERY PIECE OF FABRIC THAT ARRIVED IN MY ONLY PURCHASE SO FAR THIS YEAR!  Yes, I know that's yelling but that's huge.  I'm so proud of me at this moment. :-D

AND - I've cut tops out of two other pieces of fabric as well.

So now it's time to leave the cutting table and actually sew some stuff.

Some of it might even actually turn out to be SWAP worthy.

Which, I know, is not the heart and soul of SWAP... I'm supposed to make a plan and stick to it.

I have not forgotten about the 10 Year Giveaway, either.  I'm coming up on  1800 posts to Sew Random; I'm shooting for having the giveaway ready to announce on the rollover post.