Sewing Proceeding at a Snail's Pace...

I am not sewing these things in order at all; I need button-front shirts so I skipped ahead and made an Easy, Ageless, Cool campshirt from a recently acquired cotton lawn... I think the pattern matching is pretty good, if I do say so myself, lol. 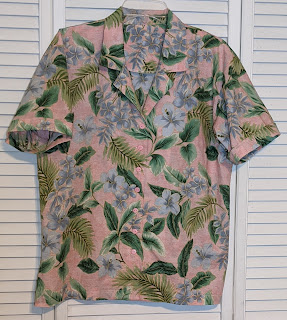 I had one bugaboo in that I can NOT find my lightweight white fusible interfacing.  I thought I'd ordered some more, but when I opened the package I found that it was actually midweight.  A bit heavier than I wanted.   But, doggone it, I wanted the shirt so I forged ahead.  Upshot...the collar is a little puffier than I would like in a perfect world, but no one is likely to notice it.  I have since received an order for the actual lightweight stuff.

I thought that would be the completer for the..June?  I think? Set, but when I pulled the white campshirt from my closet to photograph I discovered it had some spots on it.  I'm hoping they were from the last trip through the dryer...we've had the dryer fixed lately as well...and they'll wash out.  Otherwise I'm going to have to replace it. :-(.

But, I have been doing future planning; the August set for the wardrobe contained a jacket and an outerwear scarf.  I didn't have a topper scarf to wear in anything close to these colors, so I went hunting. Couldn't find a scarf (that wasn't redonckulously expensive) that came close, either, so next I started trolling fabric sites.  Found a double-faced cotton/wool blend flannel...on sale, no less...and got two yards.  I hit the fabric jackpot and got the end of the bolt...about another 3/8 yard...thrown in.

It's fantastic.  I cut 12" off of one side, trimmed off the selvedge (which was lovely, actually, but the other edge wouldn't match), straightened the ends and fringed it all around, mostly whilst on a video call.   This is a great winter scarf now...and it could easily have cost $60 if I had bought it at retail.  Now I've got about 2 3/8 yard of 47" fabric left...pondering options for that.  A waistcoat and a baker's cap (aka a newsboy cap) are both high on the list.

I've also cut out and STARTED the blue skirts; I may sew a bit more on them today but we are doing family stuff later on so...it might not happen.  But I am determined to get these things made up.