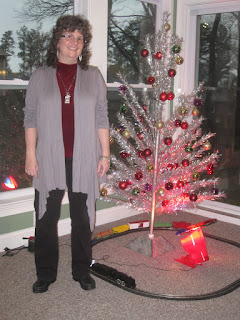 On the finished porch!  By the charmingly pathetic retro aluminum Christmas tree! Who cares what I'm wearing? LOL

Some one (at church, no less!) happened to ask if I were sporting University of Alabama colors.

November choir colors.  Ahem.  One of my favorite combos, actually.  Such a shame it gets confused with other intentions...

Fabric, Cushions and a Staple Gun...

...and a willing Sweet Baboo to do the manhandling stuff...

I've not been able to get to the sewing machine due to the misplaced stuff, but I hit a magical moment about a week ago.

Amid all the dusting and cleaning of places where sheetrock dust had accumulated, My Sweet Babboo happened to look closely at the nearly 20 year old dinette chairs.

'Those are gross.' he stated.

Weellll....I had just so happened to have picked up a couple of upholstery flat folds and some foam cushions back when Hancock's had a sale last summer.  Just for the very purpose of replacing the seat cushions and covers. 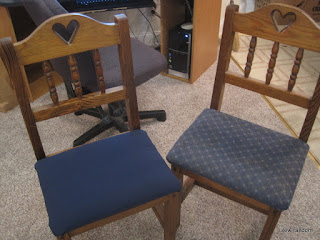 We started with the bench.  Which was kinda not so smart, as it was the most complicated one...cutout corners and pieced foam cushion (from the leftovers of the slab used for the porch swing cushion).  But...we did have the hardest one out of the way first.  We worked on the other 4 chairs for the set over the next few days...one at a time.

In all honesty, these are pretty cheap chairs; we got the set at a local flea market and the soft wood has picked up more than its share of dings and scratches; one or two have had to be repaired.

But, with materials on sale and our own labor, it's good enough to get us a little farther down the road. ;-) 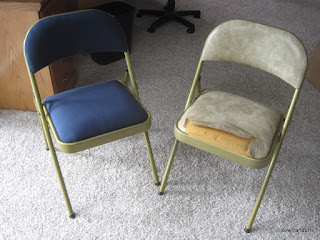 And, because I just picked up two lengths of the flatfold, we decided there was enough leftover to do another desperately needed recover:  our almost 35 year old card table set.  Some of the chairs have been 'repaired' with duck tape...that was the case for the one we recovered first.  There are three more to go and...as luck would have it...I got a Hancock's coupon in my email Monday  that was only good for 2 days, so I managed to get the extra foam cushions AND a chunk of vinyl to recover the table as well, on sale and with the coupon.

But we decided to pack up the recover tools until after Thursday...got plenty to do between now and then to get somewhat moved back into some semblance of order.  It's going...slowly...but it's going.

A Little Photo Catching Up... 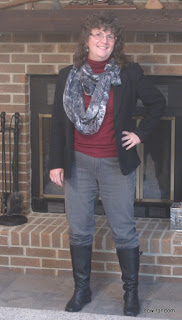 A quick catch - up post.... we took Choir Wardrobe photos last week and this week, but I'm not going into great detail on them; last week, the only thing I wore that had passed through the sewing machines was the silk/rayon burnout scarf.  Today I made the tunic dress and the leggings...the dress last year and the leggings, oh, 20 years ago?  Maybe?

But the renovation work is finally done.  We still have to move the furniture back in...but that's going to involve a LOT of rearranging in other parts of the house, so I'm not sure how long it will take.

If you compare those in-front-of-the-fireplace photos to earlier ones, you'll see the difference between the yucky pink carpet and our new tile hearth apron.  It looks so much classier.:-)

A couple of composite photos to just share the transformation; each of them show the appearance of the room when we bought the house in the upper left, and the end result in the lower right. 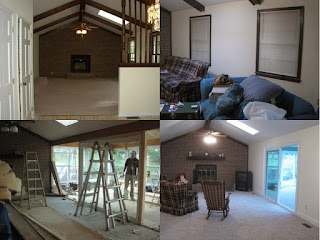 First, the den, which we didn't plan to renovate at this time, just because we didn't put two and two together and realize that, duh, we were knocking the wall out...we need to redo both rooms!

Then the sunroom, which has been in transition for about 4 1/2 years.  I was nearly despairing of ever seeing it done...

Because I was impatient, the 'finish' photo isn't quite; we still needed lights and the ceiling fans. 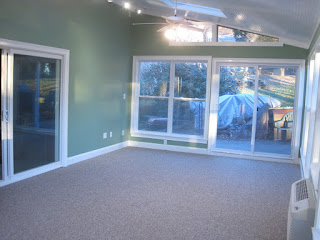 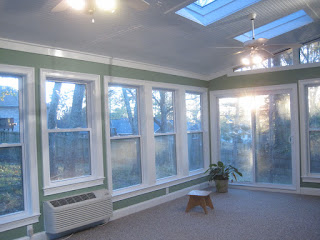 So, here are a couple of photos showing the lights and the ceiling fans, which My Sweet Babboo installed yesterday.

So...now begins the frenzy to get the furniture redistributed before Thanksgiving...

And, as I likely won't get back to the blog for anything significant for at least a week, Happy Thanksgiving to all my fellow 'Mericans; I hope you get to spend time with family and friends and that you have much to be thankful for!

I had planned to do a big celebration and giveaway to commemorate the occasion.

I did not expect to be neck-deep in renovation...which spread to at least twice its original scope...when November 4th rolled around.

Sorta like the kid who gets chicken pox three days before the scheduled birthday party.

So, while I'm not sure exactly WHEN I'll get to it, or WHAT precisely it will turn out to be, I am going to do a giveaway.  It may have more than one part.  Still pondering the possibilities.

But, because it's a thank you to folks who have stuck with me over the years, because, well, I DO thank you, I'm going to limit it to people who are following me/subscribed in some manner.  Now, it'll be on the honor system, as I'm just going to ask how you're following since there's no way I can look everywhere I might have followers.  And because I appreciate a new commitment as much as an old one, I'm not going to be picky about when you signed up.

So...the celebration is not cancelled, only delayed until things have moved back into their proper place.  Just so there's no confusion, I'm not asking for contest sign up yet. Stay tuned. :-)

And, since I'm here...an update on the renovation: I feel like we're hoarders; with all the stuff from 2  1/2 rooms crammed into the remaining 2 1/2 rooms downstairs....we have a path.  And a plastic curtain (it has moved from the original position and now seals off the dinette as well as the family room) that we have to walk around the hall to circumvent.

I am very seriously trying not to be claustrophobic in my own house.  But the contractor has assured us he will be done sanding sheetrock in a day or two and the plastic curtain, at least, can come down. That will help...but I don't think I'll relax until I can see some space in the living room again.

The furniture can't go back in the rooms until the carpet is laid, though...and I'm seriously wondering if that's going to happen before Thanksgiving.  It's going to be close.