On the Cutting Table...

You may have noticed that bodacious number under 'Fabric In' for this year on the sidebar.

I can legitimately claim that 12 yards were purchased for sewing facemasks; I am slowly whittling that down...but the rest represents a lot of wishful thinking.

One of the pieces that I bought early in the year was a printed knit from Gorgeous Fabrics.  I can't just make a plain ol' T shirt out of it; I think the impact would get lost.  It needs to be a part of something that will set it off...then, if I have any left, maybe I'll make a sleeveless t or something.

I pondered and I pondered...but the pattern that kept coming to mind was
Vogue 9108, the view with the full back (not the criss cross straps): 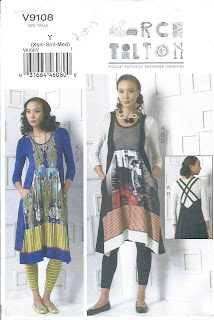 I read the reviews, thought it over, read the reviews again, pondered a bit, and then finally went looking through the stash to see if I had anything that would work with that print.

I think I found enough: 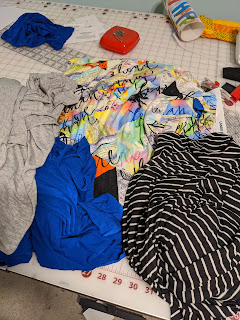 The print 'reads' as light in intensity, for all that the colors in it are bright; I have purple knit that matches the bit of purple in the print and it could work, but I think it would fight the print for attention.  The gray is  more on the right intensity level, I think.  Then the stripe and a bit of blue on the bottom; I've got both a hot pink and a green ribbon; I'll play with it when I get there and see what looks the best.

I think I am just so weary of cranking out masks...and I haven't even made a fraction of what some folks have done...that I'm ready for something a little bit weird and a whole lot fun.  My only hesitation is that all of that rayon knit could possibly be heavy and droopy.

If I can just mix a little fun sewing in amongst the masks, I think I will enjoy it all a whole lot more.

And maybe I would quit wandering into temptation on those fabric sites...lol.
Posted by Lisa Laree at 10:54 PM 1 comment:

What little sewing time I have managed to find lately has been consumed with mask making...like many of my sewing buddies.  But I'm about to hit a wall and do some selfish sewing...if I can squeeze it in, lol.

But I did do a very small little project this evening...that needs a bit of backstory.

Oh, back before Christmas, I started seeing some social media advertising for a series about Jesus and his followers.  At first, I glanced at the still shots and thought it looked rather cheesy.  But a bit later someone mentioned that this series was done by the same folks who made a short video that came out a few Christmases back called 'The Shepherd'   I had watched it, and then rewatched it the next Christmas...it was well done and moving.  So I got curious.

I began watching the 'making of' videos...and found them to be really intriguing.  But when I watched The Miracle of 'The Miracle of the Fish' something shifted.  I saw the heart behind the the stories...and I ordered the DVD set.  Now, it is possible to watch them via the app for free, but I felt like if I were going to consume the product I needed some skin in the game, so to speak.

We watched the series during Holy Week, starting on Palm Sunday and finishing on Easter.

Those videos are Really Good.

I ordered a set of the DVD's for my mom for Mother's Day (she's already received them, so that's no spoiler...Happy Mother's Day., Mom, Love you)...and My Sweet Babboo, The Flute Player and I all ordered T shirts.  And we 'Paid it Forward' to help season 2.  That's how impressed we were.

Now, my hubby and my daughter ordered the logo shirts...the circle of fish around the title...but I had been struck by another design.  There is a scene in which Peter protests when Jesus calls Matthew...saying, 'This is different!'...and Jesus looks at Peter and replies, 'Get used to 'different'.'

That moment of dialog stuck with me...so I ordered the shirt that read 'Get used to different'.

But...when I got it...I realized that, without context, it could be taken for a comment on the current craziness....and that wasn't the idea behind it at all.There is a little printing on the left sleeve that reads 'The Chosen', but it's not very obvious.

I wanted some...context...for the statement.

My solution was to dig up some scrap knit bits and add the stylized fish from the series logo, handsewn in quasi-Alabama-Chanin-style, lol.

I'm pretty pleased with the result. 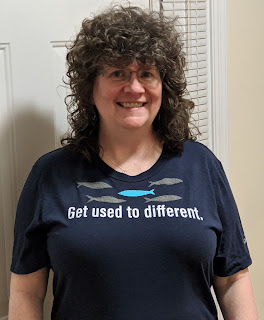 I mean, it's just a little embellishment on a T shirt, but, hey, it's something...lol.
Posted by Lisa Laree at 10:28 PM No comments: