I DID do some Sewing this Summer...

And I should have posted about it 6 weeks ago...but I was waiting for all of the pictures, lol.

Not that there was much, aside from the wedding sewing, but I did squeeze in a bit.

First up...a church T shirt for which I missed the original distribution.  By the time I got around to picking one up...all that was left was a 3XL. 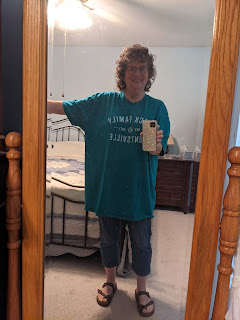 But that's fine with me...it's a simple little drill:  open the side seams (or cut open the sides, if there's no seam), remove the sleeves, pull out my Vogue 9057 top and lay it over the remaining t and recut everything, then sew it back up. 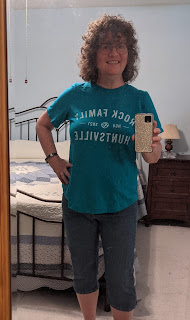 I got some jeans from Lands End last year in a nice muted green but found I didn't have many tops to wear with them.  So I splurged  on three or four fabrics that had that bit of green; one of them actually got made up.  And it's been worn several times this summer; I really like it.  There really IS green in the ditsy print, lol! Vogue 9057 again, but view D, without the colorblocking:

While I had the red thread in the machines, I stitched up a piece of linen I bought earlier from FabricStore dotcom.  I confess I've gone a little overboard on linen since I found them...such nice stuff!

This is from Cutting Line Designs; the My Heart's A'Flutter shell top with the In the Trenches skirt.  I shortened the skirt about six inches and made it slightly less pegged...it was a good thing; had it been longer or narrower I would have a real problem getting my leg high enough to climb into my Sante Fe, lol.

It's their IL019 linen in Beet...a really nice deep red.  And...this is the reason the pics are so late.  I wore it to work the week I finished it, and intended to take pics after I got home.  Well, we had choir practice in the evening and I didn't have time to take pics before practice.  Then, on the way home hubby and I decided to treat ourselves to some ice cream ...and just before taking the pics I found I had somehow dripped a big ol' ice cream drip right on the front of the top.  So it went into the laundry.  I had to wash it twice to get the shadowy spot out...and then it hung around in the laundry room waiting for the iron.  I finally got it ironed last week and I wore it in while the temps were still hitting the 80's. Such a rich red color helps linen wear well in the warm days of autumn in the south. ;-)  Managed to get the pic without mishap this time...

I have  a pair of black cotton gauze pants about half done but my sewing time has been pretty minimal for the last month or so.  I'll probably finish those up and just put them in the box for next summer.  But hopefully get a picture first, lol.

In other news, the costuming effort has begun for the Christmas production; this weekend is our first pass at getting folks into the costumes we have...or getting them on the list for something to be made or purchased.  SO FAR all that's on the 'to be made' list is a couple of 1980's maternity outfits.  Somewhere,  I believe I have a box with my old maternity patterns.  I don't *think* I donated them to the thrift store...gonna hafta get up in the attic and dig around a bit.   We do have quite a list of alterations and mending to be done but I have some new volunteers this year who are really wanting to Do Stuff...glory hallelujah!

At least we will NOT be making any tiny sheep costumes from faux fleece! LOL.