I actually sewed something over the weekend...

I wore it to church under the upcoming Women's Conference official promo t ...which is also pretty stretchy and floppy.

I did mean to get a picture, but, wow, Sundays are tough days to work in a photo and since I wasn't singing in the choir I didn't really push it.

You could only see a teeny bit of the tank top at the neckline anyway.  So it's not like you really  missed a boatload of inspiration.

I have completely lost count of how many of those Jalie tanks I've made...it's got to be somewhere around   15 or 16, at least.

They are VERY useful layering pieces.

I still have a goodly chunk of that jersey left; not sure if I will sew it up whilst I have fuschia thread on the serger or not.

Prolly depends on how quickly I can get back to the sewing machine.

Or the cutting table.

All day training tomorrow with the real, live, in-person trainer from the data base company for the staff roll out of the new data base platform.  I really wish I could've had my own full day of training before we go to the staff, but, well, by the time I sit through EVERYONE'S session surely I will have put some more of the puzzle pieces together...

The Flute Player has been cast in the Children's Musical production the Theater Performance magnet will be performing in about a month.

She showed me her character's concept sketch.

It's a yellow dragony-looking thing.

She said I will probably get called for costuming.

Resisting the urge to laugh hysterically....

And I am already up waiting on the homework to be finished.

I hope this isn't the shape of Things to Come.

I already posted my thoughts on the 4th and last 'last first day of school' on the other blog.

We went away for our anniversary on Friday morning. 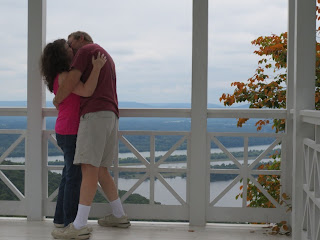 So I did pretty much nothing with the new data base until today.

Now it is the mop up and clean up and try to figure out how to do it on this side time.

Prepping for the migration had a deadline.

After the migration, the deadline for new processes is just ASAP.

No more trips on the calendar.

If I get a stress break, it's going to be in the sewing room.

Meantime, here's the last project, on the girls for the ceremony last week (my senior had left hers to put on for her recognition): 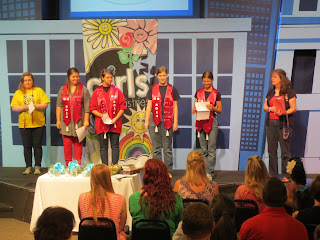 One of These Things is Not Like the Others...

One of my main ministry areas at church is with the Girls Ministry; I am the lead sponsor for both the Teen Girls Clubs (Friends...grades 6 - 8 and Girls Only...grades 9 - 12).  The girls earn various rewards through all the years in Girls Ministry for completing units of study;  up to grade 5, they earn patches that go on a sash.  In Friends, they earn charms for a necklace, and in Girls Only, they earn enameled pins that have no particular place to be worn.

So, I debated a number of things we could do; in the first year of the club, the (then) only club member made a tote bag as a craft for one of the units, thinking it would be a good place to put the pins.

But they snagged on things and fell off.  Not good.

Then I happened to think about the mantles I made for HMC graduations in years past and thought that those would be a good thing to use for pins; the girls could wear them at the advancement ceremonies and have them for the final graduation ceremony when they leave the clubs.

And, as my first student was rapidly approaching her final graduation, I thought I'd better get on it.

Never mind that the data base migration is at the crunchiest crunch time.

So, I worked around out of town trips and late nights at the office and got the mantles (we're calling them 'stoles'...which is really what they are) all put together, then remembered that Hancock's had been short one 'G' and a set of tassels when I bought the supplies.

I fused the letters/numbers on and sewed the tassels on all but one last night; stopped at Hancock's on my way into work to pick up the other supplies, then sat at work 'till late printing the certificates that I will hand out to all my girls tomorrow on the nice big copier/printer instead of our desktop printer (experience has proven that home printers do NOT handle card stock well).

Then I came home, sewed the tassels on the last stole and fused the letters/numbers on.

This one was going to be my daughter's; I'd planned to take the others in and put the pins that were still at church on them for the other girls...just forgot 'em.

Anyway.  Here are the finished items (my Senior already has hers w/ 2013 on it): 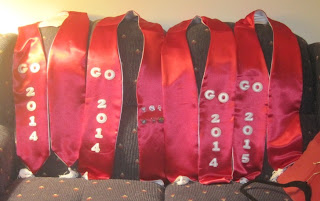 Sigh.  Somehow I twisted the last one when I laid it on the ironing board and the fusing happened on the WRONG SIDE.   And there ain't no pulling them off...

Of course, it's only noticeable when they're all together but my melancholy daughter was rather unhappy that I'd messed hers up.

So she promptly texted one of the other girls to find out if she would mind switching.


I can make a replacement...but not in time for tomorrow night's ceremony.

Sigh.  I knew I should've waited till in the morning...

(postscript a bit later:  friend says she doesn't mind.  That's a FRIEND.)
Posted by Lisa Laree at 11:31 PM No comments: 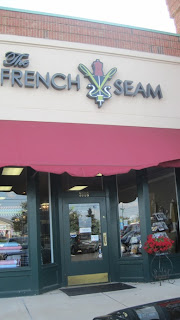 A swift trip to the northern reaches of Hoosierland had us driving around the northeast corner of the I-465 loop around Indianapolis.  We had plenty of time, so my sweet Babboo graciously agreed to a quick stop at Indy's newest (as in, it's almost 2 years old) fine fabrics store.

I'm not sure where I found out about The French Seam, other than I know I knew about it before they opened.  I was really excited; JoAnn's has been the only game in town in Indianapolis for many years.  It took us a little bit to find it, mostly because the Google Map just wasn't as accurate as it might have been.  But persistence paid off and I got to do a quick visit.

It is not a large fabric store by any means; the selection is not huge.  But, if you consider that they have simply eliminated all the junk fabric, home decor and nick knacks  that you would find in, say, JoAnn's or Hancock's (y'know, the fleece, the poly silkies, the imitation linen, etc), then it really is not such a limited choice.  They had silk, linen, wool and cotton.  Heaven.

They had just put all their summer fabrics on sale for half price; I looked it all over and saw several pieces (including some really nice tropical wools) that I would love to have purchased, but, well, I have some lovely tropical woolens sitting in my stash already so I steeled my nerve and kept looking.

I finally settled on a red/white twilled cotton; I decided several weeks ago that I'd like a red jeans jacket and this will do that nicely.  The twilled side is actually going to be the wrong side; the even weave side is much darker.  It's very soft and should make up well. 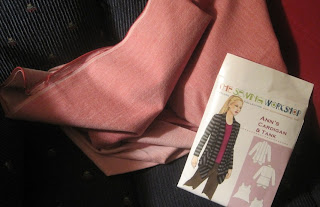 And, just because I could hold it in my hand and look at it, I picked up a drapey front cardigan pattern from The Sewing Workshop that I've been waffling over for a while now.

No, it wasn't all really bargain priced, but it was reasonable (especially as I got the fabric on sale), and I could touch and drape to decide.