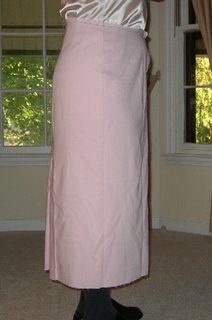 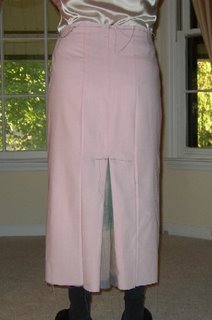 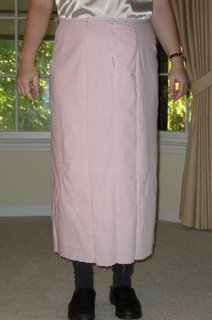 I haven't just been mulling the jacket; I also cut out a muslin of the Hot Pattern Classix Nouveau (Ain't that a BEAR to spell???) Trouser Skirt. After doing and undoing a boo-boo every bit as dumb as mismarking the notches in my FSG jacket sleeves, I got it sewed up and tested. I have tweaked it just a bit at this point...I let the CB/Side back seams out just a little going over the rump and took it all the way down, and I sort of smoothed out some of the excess curve that showed up around the inseam darts on the front. So far, that's it. You can see from the photos that the skirt fits fairly well (ok, pretend I'm wearing some Really Good control top pantyhose) except for the rise in the back waist. That's a drafting issue; I noticed it when I was tracing the pattern and wondered about it. So I'm going to have to go back and lower that CB about an inch or so. I marked it with a red pen, but since I was going by where it *felt* like it should be, in the photo it looks like the mark is just a little low. But the side seams are nicely perpendicular to the floor, and the hem looks even, so I think it's just a problem with the waistline draft.

There's another thing I noticed, too. If you look at the pattern illustration, it looks like the seams should divide the front/back equally into fourths. But my skirt appears to be divided into thirds, with the middle third divided again. I'm not sure which way I'd prefer it to be. Perhaps I'll retrace the pattern (not too many pieces...it wouldn't be hard) and alter those seams so that it divides it up differently and make up another muslin; or, since I know it'll fit reasonably well, a test skirt in each modification and see which one I like best.

But, to be truthful...I'm ready to FINISH SOMETHING AND WEAR IT.