Literally. Dreamed about it all night, so, even though I'd planned to work on other stuff today, I got up and started working on the muslin. I incorporated a number of suggestions from various folks, on the right side only, and I can tell a huge difference.

But part of that may be due to the fact that I corrected a serious bone-headed mistake I made that resulted in the sleeves getting inserted, um, backwards. (oh, I'm SOOOO embarassed!) I pulled the original pattern and the tracing out and, sure enough, I had traced two notches where there was one and vice-versa. Why? Who knows? When I put the sleeves in, I really thought they should've been the other way...but I followed the notches. And wondered why that seam was in the front on the arm.

So, the sleeves really do fit better now ;)

But, aside from fixing the Stupid Mistake, I raised the shoulder seam by 3/8" at the armsceye and shortened it 5/8"; I took a deeper sideseam at the armsceye; I took a deeper seam on the side back only from the curve into the armsceye, eliminated the bumpy curve in the front/middle front seam, took up about 1 1/4 inch from the middle front/side front seam from about the waist down, tapering back into the original just below the bust and did a minor FBA at the front. I still need to move the shoulder seam about 3/8" towards the front at the armsceye and see about doing a slight rounded back adjustment (I need DH at home for that). I think I need to raise the whole armceye about 3/8", too.

I tried taking photos of myself in the bathroom mirror...um, it didn't work, but it was good for a chuckle.

But those adjustments look to me to make the jacket fit much better; at least as good as RTW, so after I look at some *good* pictures I may just transfer all the adjustments to the pattern and go for it with the test jacket. 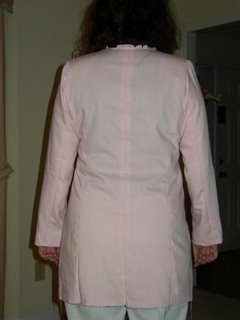 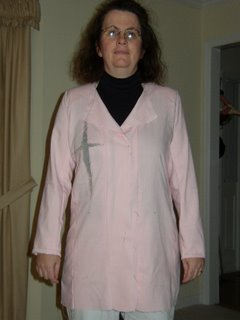 ETA: Well, I did get DH to take a couple of pictures before he headed out to an evening meeting. Dunno how much better it really looks...some of the pull lines on the right front are gone (the right side is altered, the left side is not). I'm a little leery of overfitting; at this stage, with no interfacing or lining, I know the muslin is not a 100% accurate picture of what the final product will be like. I do think I could move a little more fabric out of the armsceye area, though; now that the FBA is in place, there's some extra again. I think.

And I don't know if it's a lack of lining that's causing the wrinkling in the back, or if I still need to do some work on it. Whatever that adjustment will be, it will be small (I think squaring up the shoulder helped; the almost-bump at the top is less prounounced on the right side.)

I have RTW jackets, dating from before I began learning about these things, that fit worse than this. ;)
Posted by Lisa Laree at 12:23 PM