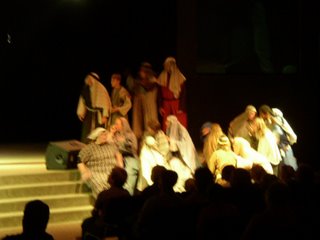 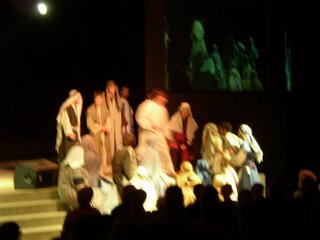 I spent the last two days doing the robes up to the point where all the serging on them was done, and serging the edges of the vests, and finishing off all the head drapes/sashes/ties, so that all we would have to do today, by and large, would be straight stitching. Miss M had two costumes that she'd taken, but hadn't gotten to, so I thought we could also work on them. I figured I'd be happy if everything got done to the snaps and maybe the hems on some things.

Then, last night, DD called to ask 'How many costumes have you got done?'

I thought that was kind of an odd question...but, she continued, "We need them tomorrow night" (tonight is our monthly Uplink service...actually, the last before the new year, since we will be busy getting ready for Scrooge the next two months).

Gulp. Well, I sent out another "HHEEELLLPPP!!" message to my sewing buddies at church, and today 5 of us worked from about 9 - 2:30 and FINISHED THE LOT. I even took in my hammer and snaps and put all the snaps on. So...we left the costumes in their zip-lok bags in the HMC room, I called DD and left a message on her cell phone that they were there and came home.

DH and I have some other responsibilities tonight that will pull us out of the service for a little while; I don't know if I'll get to see the costumes on stage or not. If I can, I'll take a photo...

(ETA: I got the photos...from the sound booth, with no flash, so they're very poor. At least one costume in the photo is not one we made, and this is only about 1/3 -1/2 the group, but they are there! I talked to one of the program directors tonight and we will be doing a 'costume workshop' for the kids sometime in the next couple of weeks so they'll know how to wear the headwraps and such...)


Scrooge '06 - still not sure who/what we'll be costuming; cast list should be up soon. Meantime, I'll try and get some time to go and sort costumes. But, DKids are on Fall break for the next week, so I probably won't do much on that this week.