Homage to an Unknown Seamstress

I've mentioned before that we received a number of boxes of Scrooge costumes from a church in Florida; some in '04 and the rest (the ones they couldn't find in '04) in '05. It's sort of a long story, but our senior co-pastors had been on staff at that church years ago when they did the production, and when the Florida church sold their old building they sent us the costumes. However, they didn't just send us their Dickens things...they sent EVERYTHING. Some of it was really...wow...not useable; some of it we still haven't quite figured out, but this jacket turned up apparently in those boxes and I would love to know who made it: 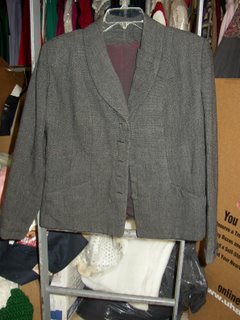 It's quite old; the lining used to be grey and it has multiple small places where the moths have chewed it, but it's an amazing jacket. Look at the collar detail...the tab pulled through the bias outer strip: 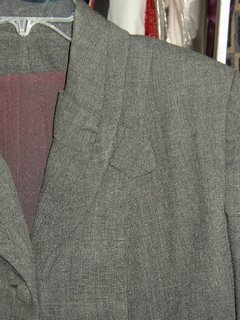 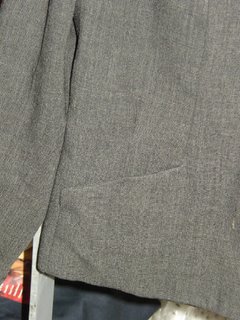 There's also a small cuff (turn-back) on the sleeves. I'll guess it to be about a size 12-14 ...it's too big in the shoulders on me, but fits well everywhere else. Does anyone recognize the pattern? I expect it is a Vogue design, based on the tab and the details, but there's really no way to tell.

I've used it on stage once...on a manequin for one of the Uplink sets, over a lime green sheath dress (we do have some odd stuff in those costumes). It's not really useable, due to the moth holes, but I really don't know if I can put such a nicely made piece out in the trash...I'm far too impressed by the beautiful work someone did on it a long time ago.
Posted by Lisa Laree at 7:18 AM

Labels: The Sewing of Others