I've learned something this year; we shouldn't take on custom costume projects after September 1, or at least after the cast is set. There have only been a couple of folks who have brought in fabric and asked for their own costume, which is ok and I don't mind doing it, but it has thrown us off just a bit. But, since one of those people is me I'm going to have to include myself in the 'do it early or don't do it' list. 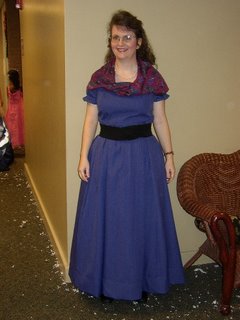 My dress from last year was just too short waisted. Last year, I was happy enough to have it done and wearable that I ignored the short waist issue, but when I pulled it out of storage in October and tried it on I realized it was going to bug me no end. If you look closely at the photo, you can even see the waistline seam above the belt. Sigh. Not good. So,I found some sort-of coordinating fabric (depends on how the light hits it), took the skirt off the dress, removed the center front panel and replaced it with a panel of the new fabric,cut off the hem allowance and replaced that with a horsehair braid facing. I used the hem allowance to make a waistband for the skirt and then had half a dress. Sunday I finally got a new bodice cut out of the salvaged front panel; it JUST fit. I will need a Bertha collar from the new fabric to pull the skirt and top together a little better, but fortunately the Belle dress pattern includes a Bertha collar (which I'll use for at least one other dress besides mine). That, and the jacket I mentioned in the Band Aid entry comprise my Thanksgiving weekend sewing, when I'm not cooking or eating, of course!

But I intend to announce to everyone that, if they desire their own costume for either Scrooge or the Easter production (that's Biblical costumes), I'll be happy to make them...in June and July.
Posted by Lisa Laree at 6:55 AM

Labels: Costuming: The Gospel According to Scrooge '05