Wildcard pack Helix pants, with Vogue 8691 (also made in the SWAP time frame, now that I think about it.  That's the first garment I finished this year) and the black cotton twill vest from Burda Style 05/2009 that has been a wardrobe workhouse since I made it ages ago...

And I've been making necklaces again; I've got a coral-and-gray one nearly done (it'll show up on choir posts, even thought gray is technically not in the mix I think it will work...) and last night I finished a knock-off of a necklace I'd seen (and nearly purchased) from a direct-sales company.  But the stated measurements in the catalog were just a hair shorter than I wanted, so I made my own.  It's convertable...I can wear it doubled, short, or single strand, looonng.   I want to put one more charm on it, but I gotta stop at Hobby Lobby to see if they've got what I have in mind... 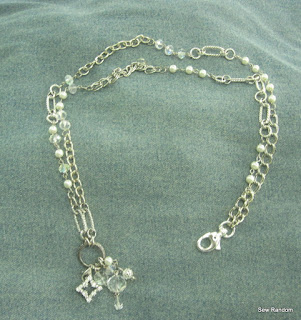