Workin' on the Second Set

...because I feel really lame talking about the February wardrobe picks when it's halfway through May, lol.

But, we had ankle pants, a knit top, and a denim overshirt for February.   I had some pink chambray for the overshirt; I copied off the pattern and laid the fabric out and realized that I just wasn't going to be happy.  It was too red.  I wanted a true pink, not red mixed with white to look pink.  So I did one last check of what was online, found some lightweight pink cotton twill and ordered it.  But that meant the shirt was on hold.

So,  I waffled a bit on the ankle pants.  I thought about just using denim capris, but it didn't really fit the aesthetic.    I pulled up my pattern catalog (the whole reason I keep my Pattern Review membership, lol) and got reminded of a pattern I've been wanting to make for a while now...an Out of Print Vogue/ Marcie Tilton pattern for lantern-style pants, Vogue 8712.  I dug around and found some very lightweight rayon-blend denim, purchased something like 8 years ago to make a shirt. But it was a bit darker than I wanted, once it arrived, so it has been in a bin since.  The reviews indicated that a drapey fabric would be best for the pants so...bingo.  I had actually altered the pattern a couple of years ago but didn't get it made up and I had a jolly time trying to figure out what I'd done.  I finally pulled out a TNT  New Look pull on pants pattern to compare and convinced myself they would work. 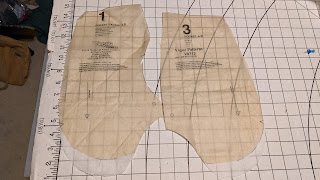 I decided to make a cut-on waistband, so I raised the top edge, and then I reshaped the pockets a bit. With the side entry I kind of thought stuff would fall out, so I made them a little deeper and shaped them so they wouldn't be hung up in the sideseam quite as much.
So I cut out the pants Monday and Tuesday, and yesterday the pink twill arrived.
Ohmigoodness, it's PERFECT.  I ran it through the washer and dryer and got it about half cut out last night.  Finished cutting it a little bit ago; all that's left to cut is the interfacing.
But LOOK at that pink.  It's a dead match for the pink in the first set.
And I can't remember the last time I actually had something cut out the day after I got the fabric. 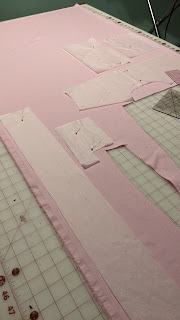 Changes to that pattern...I turned the collar piece into the cut-the-upper-and-under-collar-at-once shape that Nancy Zieman and Louise Cutting advocate, and I pulled out my copy of David Page Coffin's Shirtmaking to get the placket for the sleeve; the pattern just had a continuous lap, which I thought would be truly awkward in the twill.  It's light enough for a shirt, but it's bulkier than I wanted to do something as fiddly as a continuous lap.  This will be my first go at DPC's placket technique, but I've done it before with other patterns so I think I can make it work.
I have some more cloth diapers to finish off before I change the thread in the serger but I think I'm going to have a really good start on the 'February' combo.  'March' will be easy...I can pretty much pull that from the closet.
Still playing catch up...lol...

Labels: Clothes for My Closet, Queueing up, Start with a Scarf 2022