Well, we can't exactly upload pics to the swap this year; the gallery broke, so I have to upload these things somewhere so I can link them to Stitcher's Guild.

First up, the three 3-packs: 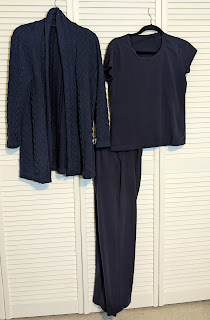 Three pack one:   The McCall's 6844 Cardigan, crafted from a poly/ rayon / elastic sweater knit.  It has a very textured surface and I had to be very careful sewing it.  But it is soft and warm to wear.  I picked this pattern because it had no closures, no binding and no facings; the most simple thing to make from such a persnikity fabric.  Next is a short sleeved Jalie 2566 T shirt, made from a substantial cotton / lycra jersey.  The pants are the allowed 'Previously made garment'....Sewing Workshop Helix Pants, with Loes Hinse Oxfort Pants pockets morphed on.    It's made from Telio's Jockey Ponte...a lovely nylon/rayon/ lycra blend that has nearly doubled in price in the last year or so.  As much as I like it...I may not be buying much more.  I probably made these about 5 years ago and they are wearing like iron. 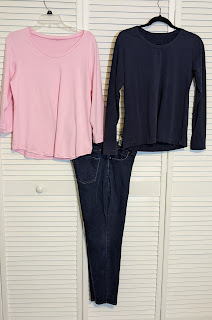 Three Pack two:  The pink top is a  3/4 length sleeved Vogue 9057, made from a very soft cotton/lycra jersey.  It's paired up with a long sleeve Jalie 2566, made from the same piece of fabric as the short sleeved t. Had to do some creative cutting but I got them both out of two yards of fabric.  The pants are the allowed purchased garment...dark wash skinny jeans, purchased from Talbots maybe 4 or 5 years ago. 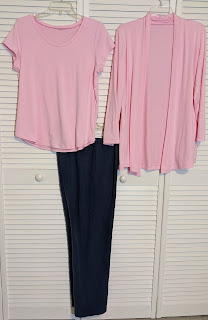 Three Pack number three...from the same length of pink cotton/ lycra jersey, a cap sleeve Vogue 9057 (I frankenpatterned the cap sleeve from a Jalie pattern, I think.  It's been quite a while since I cobbled it up, lol) and a Pamela's Patterns Cool Cardigans: Drape front cardigan.  The pants are Stretch and Sew 704, 'Quick 'n Easy Pants and Shorts' (Copyright 1997).  They are no-side-seam pants with a sort of welt pocket. The pocket piece is used to face the opening, then flipped around and topstiched to the leg of the pants to create the pocket.  Well, I don't like pockets sewn to the face of the garment like that; you can't put anything in them without causing a lump on the garment.  So I altered up the pattern a bit and made double-welt pockets.  So I have a nice pocket bag to hold, say, my cell phone or keys or a kleenex or whatever with out it just lumping right up, lol.  The fabric is the heavy linen from Fabric-Store. Com...I think the color is 'cobalt'.  I washed and dried it three times to soften and shrink it before I cut it out.  I also had to piece the back crotch point but I'll write a separate post about that, lol. 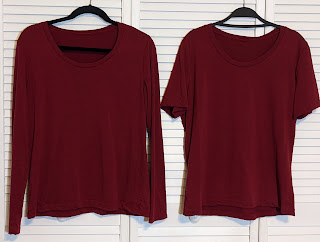 Two more Jalie 2566 t's, made from a two -yard cut of very nice merino wool.  I'd been seeing lots of advertising on my social media feeds about the superiority of merino wool for t shirts so I thought I'd give it a go.   I got the fabric at a slight discount, but it was still pricy enough that I was a bit nervous about sewing it and wanted to get the maximum value out of it.  Creative cutting ...I got two t shirts with a handful of scraps left over.  Success.

Here's everything, with the scarf that is the inspiration for my wardrobe sewing this year: 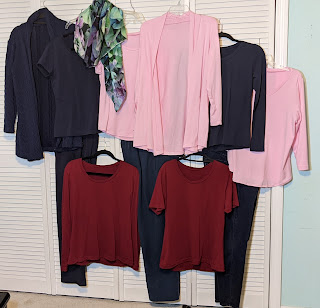 I have...stuff...in the room, so I had to squeeze everything on one end of the closet to actually be able to get it all in one pic, lol.

And, you know, you gotta see the garments on the hoof, so here's the rest of my allowed twelve pics:

Now...off to see if I can actually get these to link to Stitcher's Guild...

Labels: Clothes for My Closet, SWAP 2022