I mentioned that I had to piece the crotch point on the one-seam linen pants...thought I'd post a few pics.

The fabric wasn't quite wide enough for the full width of the pants, since they go from front crotch point to back crotch point.  I don't know if I could've wrangled a one-layer layout or not...maybe if I had turned the legs opposite each other?  But I was really rushed for time and I just didn't want to mess with trying. 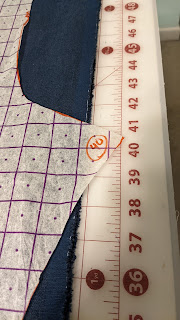 It's only a little bit in this case; I've done bigger piecing in the past.
2) Just cut a chunk from the remnants, also along the selvedge,  then
3) lay the little bit right sides together and serge the selvedge right off.  That keeps them on the same grainline. 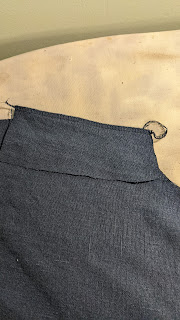 4)Press the seam nice and flat, then
5) lay the pattern back over the pants and cut the point out. 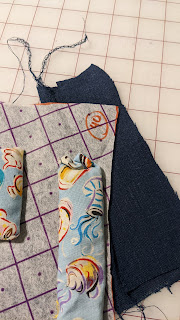 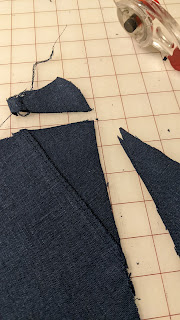 Lookit how much time and effort that saved...not to mention fabric, lol.

And...the results of the SWAP are in already, since, for whatever reason, I was the only person who actually finished and uploaded pictures. I feel rather odd about it...I really didn't go into it thinking there was a chance for me to win with a bunch of quick-to-sew garments (with the exception of the cardigan, lol).  I am guessing the pandemic-inspired lethargy hasn't quite let go of everyone yet.  It was just a good time for me to make 9 things.

But I am still WAY behind on the Start with a Scarf wardrobe; planning to do some work on the 'February' selections later this week. We have some traveling coming up again (gotta take the Flute Player's kitty down to her once they get moved into an apartment....THAT's going to be interesting)  but we have no actual dates for that yet. So I may get another weekend or two here, although I would HATE to put it off till Memorial Day.  We'll just have to go when they're ready.

So...I need to trace a pattern and put the pink thread back in the machines...