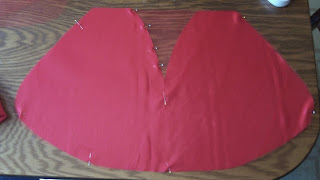 Assembly line production today; 10 petals.  I started with the most tedious part...putting the nylon net on the petals.  You'll see that I did not cut the dart out of the net; I didn't want more raw edges to snag and I had the idea that the extra net would add support to that area. 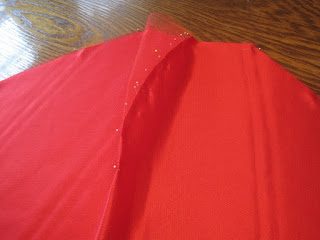 You can see how I pinned the dart out, with the extra net  present.  After I stitched the dart, I slashed the net, pressed the dart open, then sort of rolled the net up and stitched it more or less in the ditch to the skirt seam. I used a zig-zag, as I want a bit of definition along that line.  I don't know if I will do any more quilt stitching; we may just do the other veins w/ paint. 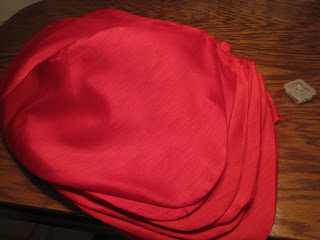 Here's the the pile o' petals; hopefully you can see that each one has a rather bowlish shape.  Next step:  attaching them to the waistband...

I actually messed up one of the petals by sewing the lining on wrong side out; rather than undoing all the serger stitching around the edge and making a mess, I trimmed the dart really close to the stiching, folded it the other way and did a 'french dart' to enclose the wrong one.  It pulled a bit of fabric up, but all it would do is make the top bubble a bit more, which is fine with me.