In Which She Most Likely Ruined a Dress But Oh Well

So, still not being able to lift anything heavier than a coffee cup, I decided to try a little project.

Earlier last month I bought a dress from Lands' End on a massive clearance markdown. 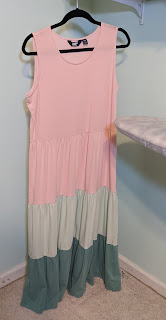 Pink and green.  I think I got it for less than the fabric would have cost.  But...alas, it has no pockets.

Which means it likely would just hang in the closet.

But I had some pink knit...what about putting in some pockets? 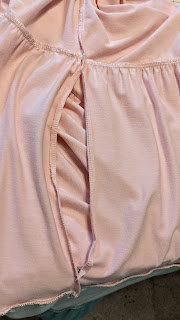 A quick little task, no?    I had the seams opened up really quickly.  Cut a generic on-seam pocket  from the knit and proceeded.

Unfortunately, 1) I couldn't interface the pocket because I'm still not handling an iron.  Knowing what I know, a RTW pocket likely wouldn't be interfaced anyway.  I did a quick look around for something suitable for a sew-in reinforcement but found nothing so I soldiered on.

And as I had so little seam allowance, I decided to modify my favorite pocket application and just curve the ends of the opening instead of doing a square turn.

Um, that might work but I didn't think it through enough and I ended up not leaving enough seam allowance on the pocket.

I did some ripping out and restitching but, well, there were a couple of, um, unstitchable areas (aka, holes in the fabric) when I was done.

No problem, I'll just do a little bar tacking to reinforce things.

Um again...somehow, the bartacking turned into a satin stitch on the seam on one side. Had no idea I  had sewn that far until I took it off the machine. It felt like it was hardly moving; I half expected a thread nest.  Nope...just some crazy stitching.

Yeah, it looks pretty bad on that side, but it was the one with the worst, um, weakness in the seam.  The other one looks like much more normal bar tacks. 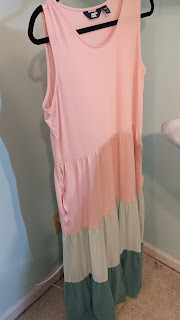 That is the bad side. Just keep moving, right?

Actually, that is the first time I have ever attempted to add pockets to ready to wear.  I did too many on the fly alterations to my normal pocket construction process, but I did learn a bit.  # 1...don't clip anything until You Are Sure.  #2  Interfacing.  #3  don't forget the seam allowance, silly.  #4) There's a reason it's a corner and not a curve.

It may just get worn around the house...but it will get worn.  Which is more than would have happened had I not given pocket augmentation a try.