So, ten days out and I'm out of the sling and back to ten fingered typing. 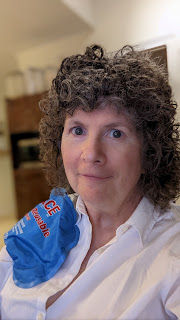 I'm moving my  arm fairly well, if a bit slowly.  At least, so long as I'm raising it straight in front of me, lol.  Lateral motion is not quite so far along.  And my arm is still pretty much purple and green above the elbow. Hence the ice pack, lol.

But I've been told not to lift anything heavier than a coffee cup for at least a bit longer, so, while I think I could manage to do some stitching,  manhandling an iron is still beyond me.  So I think I will work on patterns/ cutting for the weekend, anyway.  Mayhap by next weekend I'll be able to push the iron around and press seams and hems and such.

But, you know, I was extremely blessed in this whole thing.  Not only that we caught it early enough that it was a simple fix...so far as orthopedic surgery goes, that was probably the least invasive, most minor procedure I could have had, but the surgeon told me in my post-op visit that he was glad we'd gone ahead and done it, because 'there was bad stuff going on in there'.  I had two small bone spurs that were beginning to saw away at tendons and such.  He cleaned up the 'frayed' bits, but no major repairs were needed...yet.

But beyond that, I realize that I was extremely fortunate to be able to get it taken care of. We have fairly good insurance, and I have a job that is flexible enough that I can take off time/ work from home so that I could actually get the repairs done.  I know there are many, many folks who don't have that option.   My Sweet Babboo can work from home so he can take me to my therapy appointments until my arm is up to driving...maybe next week. And that's a blessing, too.

I did a little checking to see what causes bone spurs...basically, it's the body's response to osteoarthritis/ thinning cartilage in the joints.  Now, I've been told for years that our bodies are basically very smart and can heal up but...can't it tell the difference between cartilage and bone?  If I'm losing cartilage, that's what it should be making...right?  (Insert laughing emoji).

So, not much sewing will be happening in the immediate future, but I might be able to get a queue of sorts lined up and ready to go once I feel like I can do all the stuff.  Janice has been releasing the August wardrobe picks piecemeal this week because she's had trouble finding suitable garments.  The Hydrangea picks will be in Friday's post, but the four that have been released already are quite heavily leaning to fall.  I'm not sure I'm going to follow suit; down here, I've got at least 8 more weeks of full on Summer before things even start to cool down.  I am not ready, in so many ways, to start prepping for fall.  So I'm thinking.