So I had to do a little creative hunting to get the second dye batch.  Between Wednesday night last week and Saturday afternoon, Hobby Lobby completely shifted stuff around and the whole notions wall, including the shelf w/ the dyes, had moved.  I finally had to ask an employee...and it turned out she was working right in front of them.

And the aquamarine, of which an entire bottle is required in the mix for Arcadia Green, was out of stock.  Bummer. I bought some emerald green and a dusky blue, mostly because that's all they had, to see if I could approximate it.  I was plenty nervous about it, but didn't know what else to do.

But I had to pick up some milk, and, wouldn't you know, Publix had a decent selection of Rit dye.  Including Aquamarine.

So I mixed up another dye batch, intending to leave it in longer.  But this time I also put in a chunk of the 'too-gray' white cotton lycra knit.  One way or another, I was gonna get Arcadia Green. 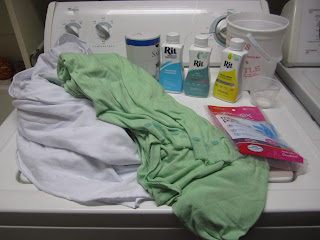 I agitated it for 45 minutes instead of the prescribed 30, and when I pulled the fabric out of the dryer...the rayon/lycra was still too yellow, and I thought the cotton/lycra was too light. 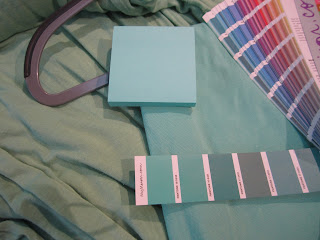 But when I put the Pantone color swatch against it (the top one on the card)...it's about spot on.  Funny...the color on the choir facebook page looks darker.  And it's a dead match for the aqua post-it notepad.

Y'all, we wore this color three or four years ago and called it 'Lucite Green'.  Wore it two or three years before that and called it 'Seafoam'.  Sometime in the past, we just called it Mint Green.

So maybe I have  a couple of pieces somewhere that will do.  And I can make up a Jalie T from the cotton/lycra.  The Rayon...I'll put that back for another day.  Or another dye bath.  I honestly don't know if the yellowish cast to the original fabric is what is giving the yellowed results or if it's just not taking that dye due to fiber content.

BUT...wouldn't you know...yesterday I got slammed with a nasty sinus infection that sent me to the Dr this morning for antibiotics and had me napping under warm facial compresses all afternoon.  I may not have a singing voice this weekend anyway.  And I don't feel much like sewing.