Confession time:  I bailed on the lace.  I had a pattern out, working it over, to make a long vest.  Now, I think it would have been...ok...but it was a make-do and my heart wasn't in it.  And I was making it up as I went...with very little time...I think it was a disaster waiting to happen.  So I folded up the lace and went stash diving.

And found a tweedy linen that I bought from Michael back in...2003.  Now, I hadn't exactly forgotten about it, but I had misremembered the color. I thought it was a peachy pink, but it turned out to be completely mauve and a great color for this month.

So I pulled it out, grabbed the New Look Jacket pattern I used for last year's SWAP (so SWAP is influencing me, even if I'm not working on a SWAP collection), tweaked it a bit and used 1 1/2 yards of the tweedy linen on an unlined, single-layer jacket.

Which I finished after church on Saturday and wore on Sunday.  There still being two more Sundays in April, I'll likely wear it again soon.

So here's what I ended up wearing for the three days of services we had for Easter, with the colors being mauve (a range of dusky pinks and lavenders) and black:

You will notice (now that I've pointed it out) that I have a STRIKE THROUGH on the WIP list on the sidebar...a UFO bites the dust!  I started this pinkish shirt back in September of TWO THOUSAND TWELVE, which was the last time we wore anything close to mauve in choir.  I didn't finish it before the end of the month...it was down to hem and buttons/buttonholes but there was something odd about the front.  Then I gained weight.

I thought several times about finishing it and putting it in the good will bag, but I never got around to it.

Lost a bit of weight earlier and, lo and behold, it closed.  So I fixed the weirdness on the front neckline...or at least most of it...and finished off the shirt.  Probably not going to get a lot of wear, but...hey, finished is finished.  And it works for this month.  So I wore it Friday with the often photographed striped modified Loes Hinse Oxfords and the even more often photographed Burda Style 'westcoat'.

For Saturdays' service, I wore last week's make, the rayon/lycra jersey Marcy Tilton/Vogue T, with Loes Hinse's Bistro jacket, in black poly herringbone suiting and Sewing Workshop's Helix pants from a RPL 'denim print' ponte.  And the only mauvey-pink necklace I could find when I poked around the mall last week. 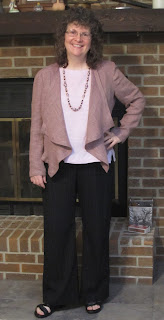 Sunday I wore the new jacket...that I finished Saturday night.   With a linen 'My Hearts A Flutter' shell, which is in the color we wore last year two years ago that we called 'Lavender Herb', but is very, very close to the lightest shade of 'mauve' in our sample photos.  With the pinstripe Loes Hinse Oxford/European mashup.  I strung the necklace from beads I found at Hobby Lobby, which matched the jacket fabric dead on.

Y'know, I really should train myself to go stash diving earlier in the process...
Posted by Lisa Laree at 7:43 PM